I Kid You Not.

The surrealism of everything happening on the strategic axis US-Ukraine is sometimes so much off the scale, that I am forced to simply shake my head in disbelief. Get this, one of the "greatest" military leaders of our generation and, certainly, the greatest eater of the men's ties, former Georgia's President, Mikhail Saakashvili just disclosed some wowser of a news. And believe me, I almost had hernia from laughing when reading Georgia's Defense Ministry account of the Russian-Georgian War of 080808, and the Ministry was headed then by this guy. So, Saakashvili speaking to a funny Ukrainian TV channel Ukraina 24, disclosed:

Translation: According to the politician, ex-CIA director and ex-head of the US Central Command David Petraeus called on the Kiev authorities to attack Donetsk and even prepared a plan to take the city. At the same time, Saakashvili did not specify exactly when Washington planned to implement this idea. “I remember there was a moment when they could take Donetsk. I’m not saying this on my own behalf - General Petraeus <...> sent me a long SMS then, I was in the north of New York, on some kind of holiday. He says:" A, B, C, D, D "- it is written down the points why now is a good time to go to Donetsk," Saakashvili said. According to him, Petraeus insisted on the need to seize Donetsk, justifying this by the fact that the security forces could cope on their own.

Saakashvili then insists that he has shown this "plan" (LOL!!) to Poroshenko but Poroshenko didn't express any enthusiasm. For you to understand why I am so shell-shocked with this news,  I'll explain.

David Howell Petraeus is a retired United States Army general and public official. He served as Director of the Central Intelligence Agency from September 6, 2011,] until his resignation on November 9, 2012. Prior to his assuming the directorship of the CIA, Petraeus served 37 years in the United States Army. His last assignments in the Army were as commander of the International Security Assistance Force (ISAF) and commander, U.S. Forces – Afghanistan (USFOR-A) from July 4, 2010, to July 18, 2011. His other four-star assignments include serving as the 10th commander, U.S. Central Command (USCENTCOM) from October 13, 2008, to June 30, 2010, and as commanding general, Multi-National Force – Iraq (MNF-I) from February 10, 2007, to September 16, 2008. As commander of MNF-I, Petraeus oversaw all coalition forces in Iraq.

Alright, so, here is the guy who graduated every single top military school in the United States, was the top of the top, creme de la creme of military brass and, if that hasn't been enough--he ran CIA. You know, THAT allegedly "intelligence" organization which is always on top of the events. Nah, I am screwing with you. So, here is the guy who should understand the issue of combined arms operations and allegedly should have a good insight by 2014 into the capabilities of Ukrainian Armed Forces, military forces of emerging LDNR and, since he ran CIA, should have some insight in Russia's military capabilities. Right? Well...

Read on why this city was called Yuzovka in the past. It is as much Russian as it was a Welsh city. Yes, like in Wales, UK. So, here is Donetsk's geographic location. 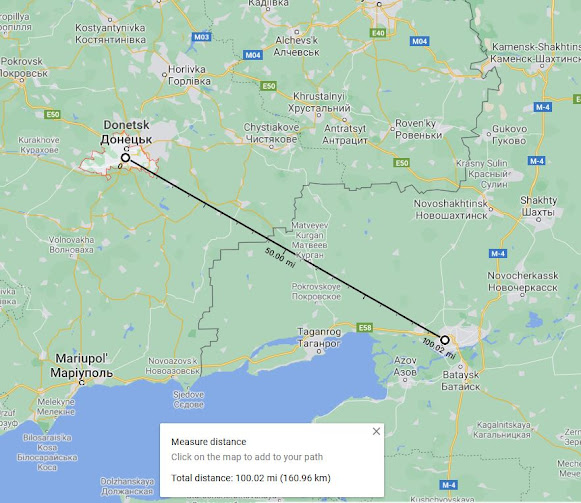 You may ask why I measured the distance (of 160 kilometers) from Donetsk to Russia's very own Rostov-on-Don? Well, Petraeus, being former big army honcho and CIA Director, should have known and saw how Russian Army dealt with Georgian one (including its Navy) in a matter of less than 5 days. Then he should have seen an absolute masterpiece of operation in securing Crimea. Now, looking at the map, one definitely should have asked the question--any junior officer would: where the location of the HQ of Russian Armed Forces Southern Military District is. As you may have already guessed it, it is in Rostov-on-Don and it is in a very-very short distance from Donetsk. But that is a strategic factor. The tactical and operational one is the fact that Donetsk is the type of the city the United States Army has zero experience in dealing with. Not only it is large, albeit Baghdad was still larger, but apart from rather serious anti-Maidan sentiment, that city was packed with very many people who served in the Soviet Army and that is a completely different paradigm than fighting some third world Arab army.

This factor alone should have prompted Petraeus not to plan anything, against the background of Ukrainian Army being totally corrupt, underfunded and extremely badly trained, with many higher-ups in it already lacking in terms of modern war-fighting being stuck with the Soviet Army's combat manuals and TOE of the late 1970s-early 1980s. So, if Petraeus thought that this force is capable of capturing a huge city without the air force, which was immediately "grounded" (well, look at the map) and, as time has shown, was no match to Russia's C4ISR which was providing LDNR's armed forces in real time, how could this guy (again, CIA Director) not know what he was dealing with? Was (is) he that incompetent? Was he so oblivious to the fact that any serious attempt by Ukraine to "take" Donetsk would have resulted in a horrendous bloodshed and a complete annihilation of the Ukrainian Forces by Russia? Was he THAT ignorant, we are taking about the former head of CENTCOM and CIA?

But above all, isn't it strange that he was SMSing his, obviously risible "plan", to a known psychopath who was thrown out of his own country? What was he expecting? Remarkably, Poroshenko most likely already knew then that the Ukrainian Armed Forces were already in dire straits. Ilovaisk and Debaltsevo have shown that Ukrainian Armed Forces were in no shape tactically, operationally and strategically to undertake any serious operations and were no match to a much more determined and skillful forces of LDNR. A bunch of neocon think-tanks continues today to "study" that war based on Ukrainian narratives, myths and urban legends, not to speak of "opinions" of pseudo-experts, some of who also predicted that in 2008 Georgian Army will "roll over" Russians, because Georgians were partially equipped by Israel and NATO, and were trained by US instructors. Boy, you all know how that thing went. But Russia and her Armed Forces of 2014 were very different form those forces which in 2008 wiped the floor with Saakashvili's Army. They were much more advanced. If David Petraeus didn't know that, it only confirms my worst suspicions about the way US military-political top thinks. Because, let's not beat around the bush here, fighting Russians, even when they are merely "militias" of Donetsk is a completely different game than whatever the United States ever encountered in its military history. George S. Patton's ignorant bravado about Russians notwithstanding. They just don't learn.