That's the formula which was promoted in the West non-stop since the moment WW II ended. Equaling Stalin and, through him, USSR to Hitler and Nazi Germany became one of a most dominant ideological streams in West's war against USSR/Russia and it pursued two main objectives:

1. To whitewash West's inaction, if not altogether cooperation, with Nazi Germany while placing own blame for helping Hitler and Nazi Germany's rise squarely on the shoulders of the Soviet Union;

2. Rewriting WW II history with the emphasis on West's role in defeating Nazism, while simultaneously trying to diminish a decisive role USSR played in demolishing Third Reich by means of demolition of its military machine represented by feared Wehrmacht  and SS and, of course, other participants in Hitler's "crusade" against USSR, such as European formations from Italy, to Spain, to Hungary, Romania--you name it.

So, when one sees this: 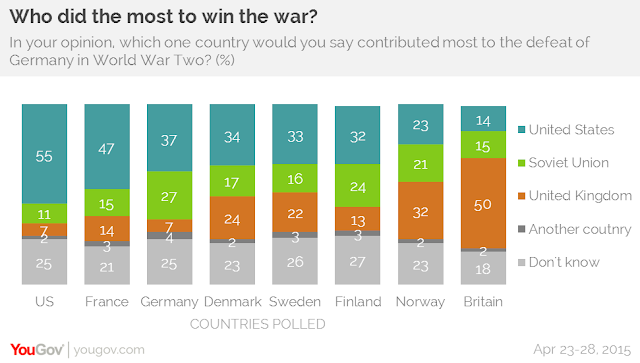 Don't be surprised with creeping success of the campaign of equating Stalin to Hitler, because in about 10 years the last push to blame Soviet Union for the start of the WW II will happen. There are many people who worked and continue to work on this, especially in the field of equating USSR and Nazi Germany. Many Westerners, of course, know such strong proponents of this point of view as famous falsifier of Russian history as Solzhenitsyn, who provided ideological ammunition to all kinds of Western falsifiers and equators of USSR to Nazi Germany. How is it done? Easily, by pointing out to the fact of existence of GULAG where, by different "estimates", done mostly by Nazi collaborators such as Solzhenitsyn's favorite "professor" Kurganov, tens of millions of innocent Soviet civilians perished thus making Stalin a criminal even larger than Hitler, which, in its turn, as you may have already guessed, smears by default the role Soviet Union played in ridding world off the Nazi scourge.

One such Western "intellectual", evidently disturbed by the fact that Russians decided not to take the crap from the so called Western "historians" about WW II anymore, exploded with hysterical and grossly a-historic piece at UNZ Review today. Eric Margolis concluded that:

We rightfully remember the horrors of the Nazi system. But what about a far larger, more murderous system that has faded from our memory, the Soviet Gulag? Who remembers Kolyma, Magadan, the White Sea Canal, the frigid winter steppes of Kazakhstan, the BAM railroad, and Vorkuta? Or the Soviet arctic mines where prisoners had to dig lethal uranium with their bare hands. An estimated 10 million political prisoners were murdered in the Soviet Gulag during Trotsky and Stalin’s regimes. Some leading Russians historians say up to 20 million died in the Gulag. That’s well double the number claimed to have died or been killed in Nazi camps.

I am not sure what Mr. Margolis mean when he uses the term "rightfully" but he is both extremely vague when mentioning "some leading Russian historians" and surprisingly specific when stating that 20 million died in GULAG. We'll start of course from those "leading Russian historians" who, unsurprisingly as a majority are, such as "professor" Kurganov (he is known for stating that Bolsheviks "murdered" 60 million), or many Ukrainian crypto-Nazi "scholars", not really historians nor even Russians. Obviously late Alexandr Yakovlev (his number was around 32 million killed), who is universally viewed in modern Russia as CIA-MI6 asset was never a real historian but a crude ideologue behind dissolution of the Soviet Union. Obviously, for people who consider Solzhenitsyn a great writer or a historian it is difficult to comprehend a complexity of Russia's XX century history, but, I would expect them (nah, they can't, I am being facetious) to at least have some basic understanding of statistics and counting.  But, as Solonevich stated, after his escape to the West, "I think the number of GULAG prisoners is no less than 5 million, but, of course, it is difficult to know". Well, it is not really difficult to know.

Here is what actual professional Russian historian writes about (in Russian) and some peculiar tables he presents: 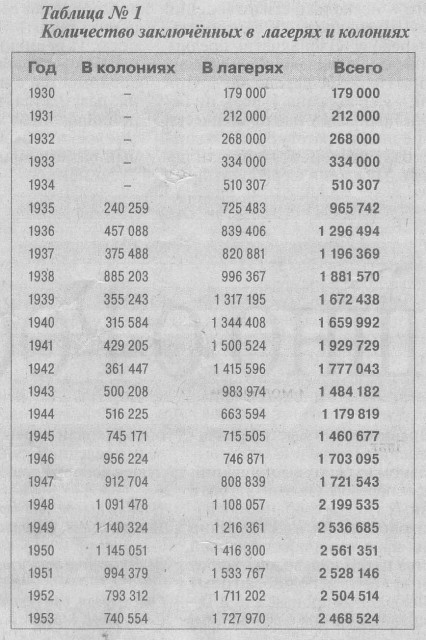 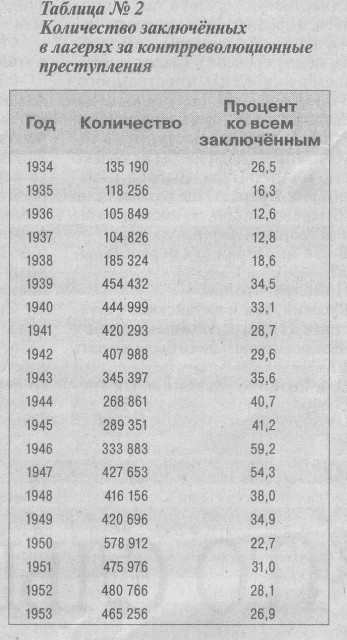 But even if one assumes that professional historians (and I mean historians, not people with agenda and no qualifications) conspired to whitewash Stalin and USSR, one cannot fight against killer facts by Zemskov which are taken from MVD/NKVD and GULAG archives and reference materials. 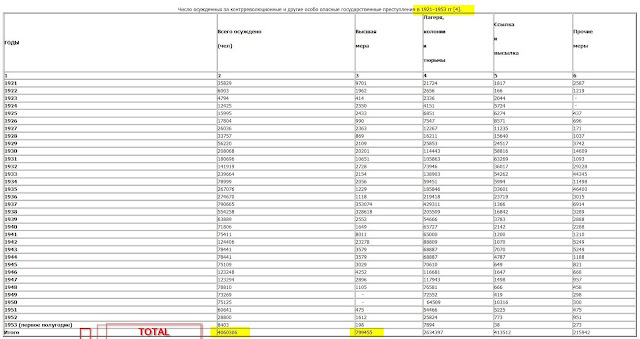 But, of course, Eric Margolis knows better than anyone else, especially being "specialist" on the so called "Holodomor"--a relatively recent fad invented in the deep recesses of post-Soviet Ukraine during Yushenko Administration and sold so well in the West, as was GULAG Archipelago and other mediocre at best writings by Solzhenitsyn, as was psychotic delirium by Robert Conquest, as was pretty much most outrageous falsified narratives, the latest being a pseudo-historic crapola by Antony Beevor about Red Army soldiers raping 2 million German women (why not 15 million?), which whipped pseudo-intellectual Western class into anti-Soviet frenzy, which organically flowed into the anti-Russian one and which, to a very large extent, is responsible for the pathetic state combined West finds itself in today. One cannot lie to himself non-stop--at some point of time one needs to have an encounter with reality and cold hard facts, if not--the death will follow. As per the death of the Western so called (and largely self-proclaimed) intellectual class, as piece by Margolis shows--the patient is dead and nothing can bring it back from the dead.

Meanwhile, Russians vigorously prepare for the 75th Anniversary of the Victory celebrations all over Russia and, as always, millions upon millions of people will march in massive Immortal Regiment processions to demonstrate what price Soviet Union payed to stop barbarian hordes from turning the world into a playground for genocidal maniacs. Western "intellectual" class cannot take it and you can be 100% sure what an intolerable pain those festivities and demonstration of national unity on May 9, 2020 will inflict upon them, especially under the Red Banner of the Victory. Let them suffer. 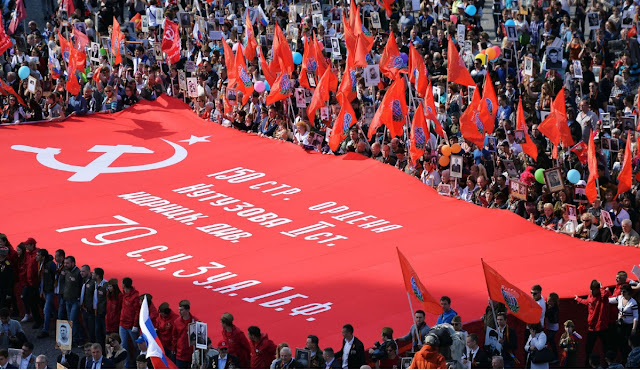 I can hear them squealing already.
Posted by smoothiex12 at 10:06 AM