Addendum To Two "No Shit" Moments In A Row.

It occurred to me that some explanations regarding US Treasuries and main holders of those financial "instruments" must be explored in a separate addendum. This will help understand the dynamics of Russian-American relations. The main question is WHY buy US treasuries or US Treasury Bonds? Let's give those a clear definition from financial "wizards" from Fidelity.

Treasuries are debt obligations issued and backed by the full faith and credit of the US government. Because they are considered to have low credit or default risk, they generally offer lower yields relative to other bonds.

So, as you can see, the United States treasury sells US debt to, actually, finance US economy. Foreign entities buy this debt because they think they can earn low yield but reliable buck on those. Buying US treasuries is also a good indicator of trust, or otherwise, in US not only economically, but even more so geopolitically. I repeat ad nauseam that Pax Americana's financial pyramid rests primarily with American military power mythology, not with US real economy. US real economy cannot generate enough growth to even scratch the surface of US debt obligations. Prior to roughly 2014 foreign governments' buying of US treasuries was based on US economic data which was, to put it mildly, not exactly connected to the reality and risk expectations were allayed primarily by the ideas that the United States, having enough military wherewithal, would be able to coerce a whole host of countries to "offer" their resources to the United States, thus providing enough fuel for continuation of the racket for a little bit longer. Then something got broken. Exactly around 2014.

The US military "primacy" was called into a serious question. You all know what happened then. Then there was 2015, and then March of 2018, and on and on, and on. The only country in the world who can both wipe the United States off the map and defeat in conventionally in Europe simply stated that she doesn't really give a shit. Recall this:

Russia is continuing to diversify state reserves away from US debt. The latest data from the US Treasury shows that Russia's share hit an 11-year minimum and totaled only $14.9 billion.The share of US sovereign debt bonds in Russia's portfolio has been reduced dramatically in recent months. Russia held $96.1 billion in US Treasuries in March before selling half its holdings in April, dropping to 22nd place among major foreign holders of American treasury securities at $48.7 billion.In 2010, Russia was among the top 10 holders of US Treasuries at $176.3 billion. With its holdings falling to $14.9 billion in May, the country is now below the $30 billion threshold for inclusion on the Treasury Department’s monthly report of major holders. On Tuesday, the Treasury released a list of 33 countries which includes the biggest holder China to the smallest Chile. Russia is no longer on the list.

Pay attention to the date of this report: 18 July 2018. About 100 days after Putin's address to Federal Assembly on March 1, 2018.  The dates are not accidental. As anyone can see, US treasuries are a bit more than just financial instruments (any government issues those) but they have more sacral meaning as world's admission, and a sign of belonging, to what was considered the global elite club based in Washington D.C. Now take a look at this graph: 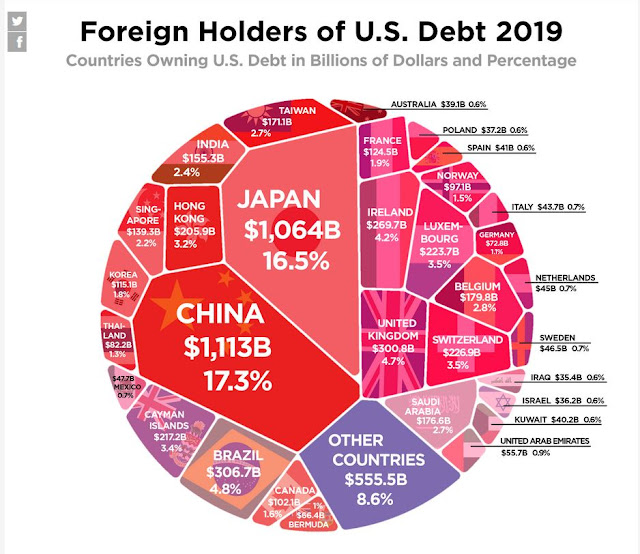 Can you find Russia in it? Don't even try. Russia is not going to be financing the economy of a country which declared Russia an absolute evil. You just don't help people who viscerally hate and ready to kill you. So, as reputable Vesti reports (in Russian), Russia's "investment" in the US treasuries on December 2019 was exactly $9.974 Billion. In other words, Russia has 7 times fewer US treasuries than Bermuda, and 25 times less than mighty Luxembourg. You see, at issue here is what drives the American "elites" completely mad and desperate. Here is simple answer, unlike even China, not to speak of occupied Japan, Russia has an official receipt of being fully sovereign country. Even economically mighty China cannot have as much freedom as Russia does in China's economically symbiotic relations with the United States.
Russia does have those freedoms not just because she has one of the most, if not THE MOST, undervalued economy in the world--a courtesy of swindlers from all kinds of Western ratings and economic "analysis" institutions--but because this grossly undervalued economy produces weapons which allow Russia to insulate herself from any kind of blackmail and be her own thing. One of those major things is Russia's refusal to get US financial "debt" as a sign of submission to the rules of self-proclaimed hegemon. Moreover, Russia, considering her global status, is leading the way in dumping US treasuries, and that is a deadly threat to existing regime in the West. As many observers within the Empire are noting, something really strange is happening to the symbol of the financial reign by the United States:

Under the impact of a stupendous spending binge peppered with juicy tax cuts, the Treasury Department has had to issue a flood of Treasury securities to fund the cash outflow. So, over the past 12 months, the US gross national debt has ballooned by $1.5 trillion to $22 trillion as of January 30, according to Treasury Department data. And these are the good times when the economy is hopping. At the next recession, this is going to get cute.But who the heck is buying all this debt? That question will grow increasingly important and worrisome as we move forward with this gigantic ballooning debt, fueled by deficits that Fed chairman Jerome Powell calls “unsustainable” at every chance he gets

The answer is simple:


American banks (very large holders), hedge funds, pension funds, mutual funds, and other institutions along with individual investors in their brokerage accounts or at their accounts with the US Treasury were huge net buyers, while nearly everyone else was selling, increasing their holdings by $1.36 trillion over the 12-month period. These American entities combined owned the remainder of the US gross national debt, $7.5 trillion, or 34.4% of the total!

The United States literally turns itself into the self-licking ice-cream cone and, eventually, she will lick herself into the empty cone, with no ice-cream left. Moreover, the United States has been denied her post WW II myth of military omnipotence thus showing very clear signs of weakness, like recent events with Iran, which indicate to many foreign US treasuries' holders that at some point of time they may submit those obligations for cashing without serious consequences for themselves and that is the big game and plan for them--big players, such as China, already doing this, however slowly (but then again, China holds more than a trillion worth of US treasuries) and the whole thing is already in progress and pass the point of no return.

American "elites" know who drives this process--Russia. And China. And desperation shows:


Speaking today at London's Royal United Services Institute, Esper said the political and economic leverage wielded by the Chinese is already eroding the sovereignty of some nations. And Russian invasion of Georgia, annexation of Crimea and violation of the Intermediate-Range Nuclear Forces Treaty, as it continued to build up its inventory of strategic arms, shows that Russia is unwilling to be a responsible international actor, he said. "[We] cannot stand idly by while authoritarian nations attempt to reshape the global security environment to their favor at the expense of others," Esper said. "Doing so would invite continued aggression and diminish our ability to deter future conflicts. As such, America's National Defense Strategy makes it clear that great power competition is once again the primary concern of U.S. national security."

Mark Esper and many people in Pentagon are not stupid, they can calculate and do operational planning, they know that the US military today is capable to fight only third world militaries, and even there success is not guaranteed. And yes, in Esper's definition of Russia "not willing to be a responsible international actor" is correct, precisely because she knows what kind of rogue state she is dealing with and that is why she was in a separation mode non-stop since 2014. But Russia is still in business with the US, as she should be, because Russians finally learned a good ol' capitalist truism--money doesn't smell, only business--nothing personal. Only hard cold cash--no treasuries. What a funny world we all live in.