Looking From The Inside.

The moderate success of my first two books--they did hit the rank of Number One Bestsellers separately in a few military history-policy categories, and once ended both on the top sellers list (one of them), was largely due to fairly good publicity and reviews and one feature of those books which was extremely important. About it--below. 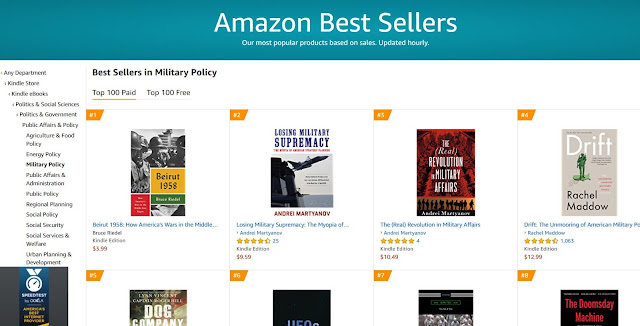 I wish they could hit Number One in fiction--but I don't do one, maybe I should, or at least try the art of erotic novel--sure as hell more money in those categories. Yet, all things considered, both were written from the point of view of the outsider, who (me, that is) had to lay out a variety of historic and scientific facts to describe a complex reality, both geopolitical and that of a person who had to face a complete collapse of what remains of the Republic through wars of aggression and a complete mismanagement. I know, I know, my background matters here, but it was also a hindrance of sorts because I could point out only to fairly obvious, or laying on the surface, facts of Western in general and American in particular history--I could not cross the red line of passing detailed judgement of, say, US military. Increasingly, it is becoming easier. It is one thing to be an outsider with everything that comes with the territory, totally another--seeing insiders losing the shackles of political correctness and undue politeness and letting it fly.

I am talking about upcoming Tim Bakken's book:

The Cost of Loyalty: Dishonesty, Hubris, and Failure in the U.S. Military

Bakken IS an Insider, he is a professor in USMA at West-Point. Yes, he is not the first one and, most likely, not the last one who raises the voice on the hot bloody mess that characterizes US Military today. But what did really catch my eye was a description of the upcoming (February 18) book:

Tim Bakken has come to understand how unquestioned faith isolates the U.S. armed forces from civil society and leads to catastrophe. Pervaded by chronic deceit, the military's insular culture elevates blind loyalty above all other values. The consequences are undeniably grim: failure in every war since World War II, millions of lives lost around the globe, and trillions of dollars wasted. Bakken makes the case that the culture he has observed at West Point influences whether America starts wars and how it prosecutes them. Despite fabricated admissions data, rampant cheating, epidemics of sexual assault, archaic curriculums, and shoddy teaching, the military academies produce officers who maintain their privileges at any cost to the nation. Any dissenter is crushed. Bakken revisits all the major wars the United States has fought, from Korea to the current debacles in the Middle East, to show how the military culture produces one failure after another. The Cost of Loyalty is a powerful, multifaceted revelation about the United States and its singular source of pride. One of the few federal employees ever to win a whistleblowing case against the U.S. military, Bakken, in this brave, timely, and urgently necessary book, and at great personal risk, helps us understand why America loses wars.

This book promises to be a fascinating read and its description has some key phrases which are so reminiscent of the description of this one. I think this is indicative of commonality of the observations made by outsiders and insiders, who try to not only point out to failures but know for sure and warn that the history of non-stop failures is having a debilitating influence on the American society and will lead, eventually, to a complete loss of any liberties remaining in the US and will bring a final collapse of the American Republic. I know this as an outsider who can compare, it is absolutely fascinating what an Insider has to say.