It Is The Devil You Know--II.

Let's continue a bit of rationalization and reasoning which we started in the previous post with the same title  and get back to our global commercial airspace matters. Here is the MC-21 cockpit: 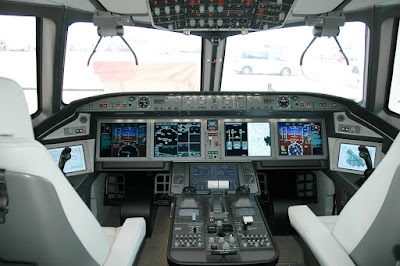 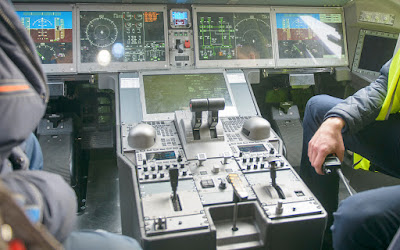 This is how MC-21 or, for that matter, any other commercial aircraft flies. Straight and slow.

For this kind of flying commercial aircraft need all kinds of computerized on-board systems which control all mechanics and engines, which also provide monitoring and representation of the state of on-board systems visually. They also require radar, collision avoidance system, altimeters, navigation (usually inertial navigational complex with various correction systems, GPS, GLONASS Et all)  and the list goes on and on this is what Honeywell, plus some Israeli and French avionics companies pride themselves on doing it better than anyone in the world. When speaking about Russian commercial aircraft, however, one should be fully aware of the presence of Western avionics and some other systems not because Russians are so dumb and can not make their own, but primarily because having Western "partners" helps the process of certification and of reaching foreign markets. After all, there is also a reasonable want of many potential customers to deal with avionics, aggregates' and engine packages they got used to. But let us continue:

Here is a standard cockpit of SU-35: 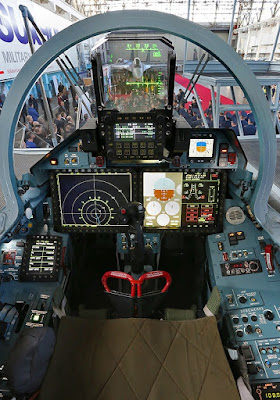 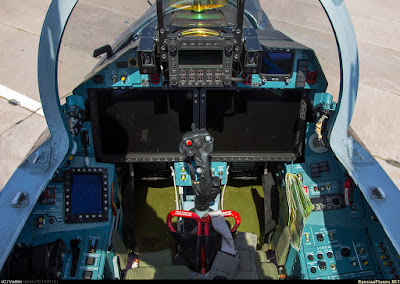 This, meanwhile, are SU-35 (and SU-30SM) engines, or rather engine exhausts: 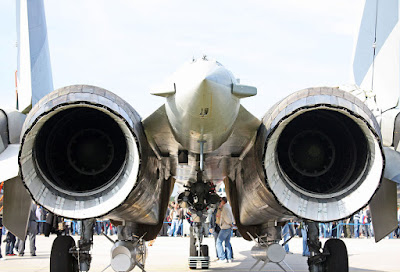 And this is how this damn aircraft flies:

If you want to get the point without watching the whole thing, get to 6:30 mark and try not to drop your jaw to the floor. Avionics of SU-35 presented in the photos above is 100% Russian-made and overwhelmingly, including elemental base, including processors, Russian-designed and produced. So now, let's cut to the chase. Not only modern combat aircraft such as SU-35 can do any commercial aircraft type flying easily (well, without passengers, of course) but they fly in such a way and carry an astonishing array of cutting edge sensors and weapons, that any commercial aircraft avionics and what it can do compares to SU-35 avionics as a horse and buggy compares to the top of the line Ford truck. In other words, try to develop AI based software and then realize it in own produced hardware for all-aspect thrust-vectoring engines. I can tell you immediately, it is much harder than producing pretty much unified and fairly boring avionics package for commercial aircraft.

Here we are coming to this very important juncture at which we have to ask this straight-forward question: if KRET (part of Rostec mammoth corporation) is capable to make avionics which makes SU-35 fly like an alien spaceship while simultaneously using fully integrated sensor and weapons suite which commercial pilots (unless they are former military) have no grasp of, isn't it reasonable to assume that, say, KRET and UAC will have no serious problems removing US (or Western) made avionics from Russian made aircraft, together with 100% Russian designed and made engines, thus removing them from the sanctions which are coming? What sanctions you may ask? Well, the US has the right to prohibit any sales of aircraft to anywhere if they contain more than 10% of US-made parts. And this is the next step Trump Administration will take against Russian airspace.

Russian know it. But once you remove P&W engines and Western avionics and aggregates from MC-21 (and, accidentally, SSJ-100) you get almost fully Russian-made aircraft which will not be affected by sanctions, at least not this way. And here is the trick. Look at PD-14--not a single foreign piece in it. In fact, this engine pushes boundaries of what is possible and promises enormous savings for customers. Some say as high as 17% over any Western analogue. Well, even if it is 10%--it is gigantic in commercial aviation terms. US plane makers know it. Moreover, PD-14 already launched another mini-revolution of sorts in commercial engines design (is it possible that it is somehow connected to Russian combat aviation, wink-wink) and materials. So, make your own conclusion if the makers of avionics and aggregates for SU-35 or SU-57 will be able to replace western parts on commercial jets? I guess it is always harder coming up in complexity than down and that is your answer. But perspective is even more threatening for the end of the next decade once PD-35 and CR-929 go on-line.

If Russian commercial aviation market is large--its loss for Western commercial aircraft manufacturers is painful but survivable, the loss of Chinese market, on the other hand, talk about tectonic shift in commercial aviation and that is what CR-929 will do. Well, that plus I have some difficulty believing that all issues with COMAC 919 will be solved in timely manner (they will be solved eventually) but one way or another it is not real competitor to MC-21, A-320 Neo or B-373 Max 8. So, it's impact will be limited. The reason? China does not have modern engine, Russia does and, in fact, it is being certified as I type this. So, the trend is being set and, considering the fact that DJT doesn't control his own government, there is very little necessity of any kind of cooperation, especially with upcoming November sanctions and, I don't think, Putin really believes Trump anyway. But it was stated many times before--sanctions are good for Russia, well, except for the last vestiges of some so called liberal (in reality criminal) and so called "business" (mostly money making and laundering) circles of Russia who, as I said many times before, should worship Putin who is the only obstacle between this public and lamp posts on which they might be hanged the minute he steps down if they trespass. But that is a separate topic altogether.