Continuation from here.
For any Westerner who ever tries to get an honest grasp of the Russian modern history (19th Century till present) detaching oneself from own historical, Western, in general, and American especially, experiences is a must. Those are absolutely inapplicable to Russia with a sole exceptions of Western liberal influences the way those were consumed, converted, Russified that is, and transplanted by what is known as Russian 19th century intelligentsia—overwhelmingly Russian in its origin. The ever important Russian issue of the land, serfdom, peasant commune (aka Mir) and backwardness when compared to the West is what drove Russian history in the 19th century. Of course, Russia's intellectual and art history of a period is very important. As Aileen Kelly noted in her introduction to Isiah Berlin's wonderful collection of essays known as Russian Thinkers:


The view that despotic socialism was no more than Russia deserved would be accepted by many western liberals as not unjust, at least with regard to the 'devils' of Dostoevsky novel, the Russian radical intelligentsia. In the degree of their alienation from their society and their impact on it, the Russian intelligentsia of the 19th century were a phenomenon almost sui genereis. Their ideological leaders were a small group with the cohesiveness and sense of mission of a religious sect. In their fervent moral opposition to the existing order, their single-minded preoccupation with ideas and their faith in reason and science, they paved the way for the Russian Revolution, and thereby achieved major historical significance.

What is left to ask, in this case, is WHAT made Russian intelligentsia so "radical"? Western liberal ideas? Sure, in the end, most of this intelligentsia, from radical Westernizers such as Chaadaev, Vissarion Belinsky or Alexander Herzen, to Leo Tolstoy (who actively read Jean Jacques Rousseau while writing War and Peace), to Turgenev, who happened to be the "resident" of Russian intelligence in Paris, were all people who knew Western Europe first hand, lived there for long periods of time and in general had means to dedicate themselves to intellectual endeavors. It matters, of course, that overwhelming majority of this intelligentsia were Russians, not Jews, and many were aristocrats and nobility. Yet, they stood, radically at that, in opposition to "regime".  How so, which is especially notable for the thinking and writing of Nikolai Nekrasov or Leo Tolstoy who were land owners and owned serfs? The answer is in the question.

Anybody, who ever visited Sevastopol and bothered to visit all of its places of combat glory in Crimean War (1854-56), from Fourth Bastion, where young officer Count Leo Tolstoy served and wrote his Sevastopol Sketches, to a Malakhov Kurgan memorial complex, to a magnificent (stunning really) Roubad's Panorama Siege of Sevastopol at Historic Boulevard, one would be struck, while walking through expositions, with few things. For starters, one is always struck with a small size of the uniforms of Russian soldiers and sailors presented in those expositions. Make no mistake, we all know that people were smaller then, but between stunning Patriotic War of 1812 exposition in Moscow's Historical Museum and those of 1854-55 there is very little difference in sizes. I, personally, was always struck by this fact. And then, of course, the guide who would be taking you through weapons' exposition underneath the main floor of Panorama will tell you, that while fighting combined forces of Great Britain, France and Turkey, trying to defend Sevastopol, Russians were armed with smooth bore muskets. The invaders—they had rifles. Those rifles had a much greater range than Russian muskets. Well, that, plus they were dramatically more accurate. Russia lost that war and abandoned Sevastopol. Humiliating for Russia Treaty of Paris was signed in 1856 and, far from this "radical intelligentsia's" condemnations of Czarism, the voices of condemnation were heard from Czar's own family. As Grand Duke Konstantin stated: 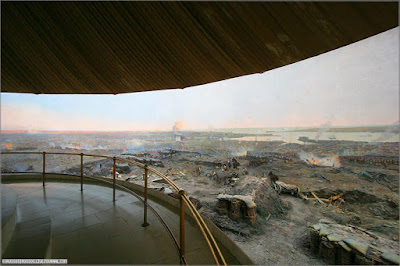 Needless to say, combined naval Anglo-French squadron had more screw driven ships than whole of Russian Navy. Here we come to an important juncture—Russian intelligentsia, which was, sometimes not without the merit, accused of wishing a defeat to Russian Czarism in Crimean War, was not just doing that out of hatred to the regime—it was the means to an end. Obviously, many falsifiers of Russian history, such as Solzhenitsyn, consistently refused, out of faux patriotism, to attribute Russia's humiliating defeat in Crimean War to actual serious economic, material, cultural and organizational backwardness. The fault was squarely placed with those people in Russia who called for this defeat. Fine, many did call for that and that doesn't make them right, but this fact in no way removes, even under constant whining of all kinds of "patriots" about aggressive West (anybody in their own mind blames rain for being wet?) and presentation of myriad of petty excuses for a loss, the fact that when it really mattered Russia had no (with the exception of some Russian naval ships which were first in the world to utilize Paixhans Guns in naval combat) economic and technological wherewithal to deal with premier military and economic powers of the era. Truth was—Russia, for all her creative genius waking up, remained a profoundly backward agrarian society not fit to compete with emerging industrial powerhouses of Europe and North America. Crimean War exposed this sad fact completely.

In the foundation of this backwardness WAS serfdom (virtual slavery) of Russian peasantry, medieval level of agriculture and cultural set up of Russian village, Russian peasants' Mir—a commune which pursued only one objective, survival of people who were counted for nothing by Russian aristocracy and nobility, who owned them. The warranted, in fact, irresistible question is this case is this: in what sense Jews, who themselves lived in Pales of Settlement, are related to this core issue of Russian history? Sure as hell, Jews didn't invent serfdom. Nor did they invent transition of Russia to absolutism under conditions of evolution to absolute serfdom (see Sobornoye Ulozhenie (Соборное уложение, "Code of Law"—in Russian) and virtual locking Russia into feudal economy, while the West's absolutism was growing together with the growth of industrial capitalist forces.

Horrors of serfdom and its profound and long lasting debilitating influence on Russia are well documented and require no additional elaboration, enough to start counting peasant uprisings in Russian history, not to mention by far not exceptional cases of Russian serf-owners' sadism towards own "possessions", such as notorious Saltychikha. So, what was, in this case, surprising in the fact that Russia was not ready to enter one of the first industrial age major wars which she lost despite all efforts and heroism of her military leaders and Russian soldiers and sailors, all of who were former Russian peasants? In one of the most important pieces of Russian classic literature, Goncharov's Oblomov, main character of the novel, a lazy day-dreaming landowner has his life changed when dealing with his childhood friend Stoltz who represents new capitalist forces arising in Russia. Stoltz, being a good friend of Oblomov and who honestly tries to shake him from the state now known in Russia as Oblomovshina, inadvertently causes Oblomov a great pain with Oblomov dying in the end—an unchanged man, a personification of 19th Century Russia. Even when the serfdom was abolished in 1861, the year American Civil War started—a first fully genuine modern war of the industrial age, which also saw many Russians fighting on the Union's side with, in the end, Russian officer Ivan Vasilievich Turchaninov (Ivan Basil Turchin) becoming one of the key figures in the process which led to Emancipation Proclamation. Needless to say, Turchaninov (Turchin) was also a veteran of the Crimean War.  Interesting...