This Is How Real Geopolitics Works.

Here are today's quotes for oil. 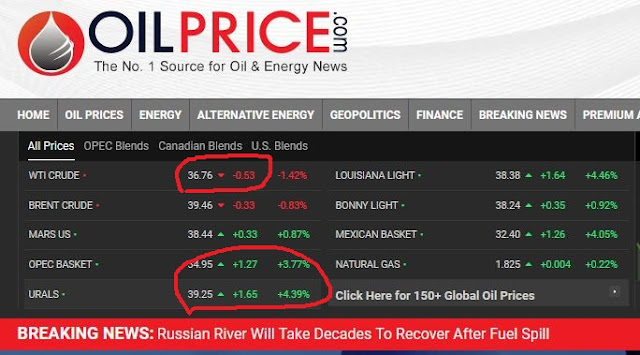 For people even remotely acquainted with energy issues and Cold War 2.0 (I suck at the former and have a clue on the latter) it shouldn't be a surprise to recall that Russia, a producer of Urals brand of crude, has (and had for a long time) her budget calculated with the base price of barrel of her crude of around $40. A year ago, ever-wrong Bloomberg--so, you see my conundrum here, it is near to impossible to find competent and objective observers of Russia in the US, so I have to get whatever I can--noted when reporting on Russia's balanced budget:

So far this year, the figure was actually under $42 as the government raised taxes but was slow to release planned spending, according to Kirill Tremasov, a former Economics Ministry official and now director of analysis at Loko-Invest in Moscow. For the first seven months of the year, the government reported a surplus of 3.4% of gross domestic product, double the full-year target.

That was August 2019. Something tells me that these were not sanctions Putin was preparing Russia for--Russia lives under sanctions non-stop pretty much all her modern history, so there was very little strategic change in the way sanctions apply--slightly more, slightly less, who cares. My point is completely different here--feel free to browse my writing in this blog this year leading and during this whole oil prices snafu. As was stated--Russia did anticipate an implosion of oil prices and was ready for it way-way before the shit hit the fan, and that means Covid-19 too. And that, once one sees Russia de facto reaching today her very comfortable crude prices, while keeping US shale oil, and Saudis, under her thumb, tells about, pardon my pathos here, superb strategic planning and forecasting at Russia's top political level.

Of course, strategic planning is like that Electronic Countermeasure Thingy--that is if you have enough power to do so (hint: nobody has)--you can drown in noise pretty much a whole frequency spectrum in which combat electronics worked, works or will work. That will be not only modern iteration of Lope De Vega's (or if one wishes ancient Greek's fable) famous play of The Dog in the Manger, where one doesn't use whatever is at his disposal but also doesn't allow this whatever to be used by others. It is stupid, it is extremely energy consuming and in the end you suppress your own capabilities. But, of course, there is another way and this one goes way beyond Electronic Warfare, where modern ECM and ECCM systems detect, identify and counter almost instantaneously any kind of threat in a narrow frequency band. This applies to pretty much everything in life and is known, of course, as OODA loop. Ah those Observe and Orient truisms, when Colonel Boyd was writing about it he, of course, meant that whoever does this OO routine is observing and orienting oneself within reality. This art, however, as I preach for years, has been lost in the US for a long time now, while in other quarters this art transitioned as an organic part into the fully blown establishment dealing with this Observing and Orienting. No, it is not just intelligence alone, albeit it is part of it, very important at that, it is a whole complex of state and even private institutions who look dramatically different from the inside than all of the US think tankdom which is designed for merely one purpose: through providing sinecures for all kinds of characters from US military-political-intelligence and even business top to push all kinds of political agendas by means of "research" which, depending on who finances it, may, often does, arrive to mutually exclusive conclusions.  Iraq's WMD, you know, cough-cough....

I vividly recall triumphalist declarations in all kinds of US compost media ranging from said Bloomberg to NYT, to all kinds of neoliberal globalist rags, on how Russia is about to go broke and Putin is going to lose his grip on power and how riots are about to break out in Russia, so you get the gist of this narrative, another false one in a long-long record of US media and "analysts" who do not seem to be able to get a grip. At that time, however, few paid attention to a rather calm and nonchalant predictions of Russia's energy minister Novak that things will come back to normal for Russia (and this normal is around $40 per barrel) really soon. Well, looks like Novak and this ever "losing popularity" Putin knew better. I will go out an a limb here and even propose such a ridiculous (not really) idea that Russians knew the essence of the game very-very early. Sometime early last year, I guess. And here is the point, yes, there is Moscow Stock Exchange, but it is primarily for as bunch which stole things in 1990s and nobody really gives a flying fvck, including Russia's government, about what is going on at Moscow's Stock Exchange. Feel the difference with the Western World? Yep, it is all about reality. And reality is such that Russian "liberda", which is a pretencious copy of American moneyed class, lost it big time.

Make no mistake, most of them are losers by definition and they exist only because Russians are civilized people and decided that they indeed reached the limit on revolutions. But get this: 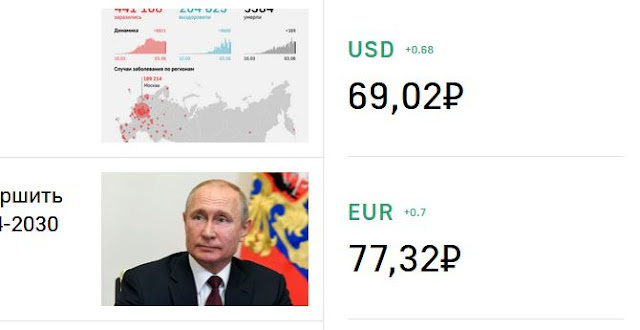 This is today exchange rates for Ruble and this is in a stark contradiction to all those domestic and foreign "experts" who predicted Russia's demise with all that follows, like Ruble to USD as 200 to 1. For people, who have never been trained in real analysis and in a development of information into knowledge, the fact that, even with the start of oil wars and then "attack" of Covid-19, there was no rush of Russians buying foreign currencies, such as was the case in every modern Russia's crisis since 1990s, should have been the most important observation. But no, who observes anything when one can create own unicorns-run universe and orient oneself in it, instead of facing hard cold reality of a serious geopolitics which is formed by cold reality of power-balance which rests on the foundation of the sound economic theory. Even in 2007 the United States had a chance to change the world. It failed to do so because, as history shows, it can not learn even from own brilliant men and women. But I repeat myself. In conclusion, I increasingly begin to arrive to the point of view expressed by Karen Shakhnazarov that the whole "oil war" thing was conceived not by Saudis alone, but with the US blessing. We all know the result, don't we. It was forecast and anticipated in Russia.
Posted by smoothiex12 at 4:04 PM