Yet another "strategy" for doing something-something against some threat to America, this time by The Republican Study Committee's Task Force On National Security And Foreign Affairs. I'll be honest with you upfront--I didn't read this 120-pages long "document" because there is nothing to read there. While I am on record that US Democratic Party's cabal of the "leaders" is a clear and present danger to the existence of the United States as we know it, any Republican "institution", including this Committee of some Task Force is only slightly better in a sense of being slower in terms of completely destroying the United States, but both parties are incompetent and cannot by definition produce any "strategy", which will not be implemented anyway in terms of actual "countering" threats but sure as hell will make America's position even worse.

The "document" is titled.... well--you can see the summary of this "strategy" here and from there you also can follow, if you have nothing better to do, to the full version. The whole thing is primarily about China, China, China but also has some pages dedicated to Russia, Russia, Russia. I will abstain from commenting on Chinese "threat" which US legislators of the past helped to actualize by aiding and abetting the largest transfer of the American industry and technology to this very same China (you can acquaint yourself with some details here).  Remarkably, though, one phrase from this, whatever it is, attracted my attention, get this from page 7:

China currently has the world’s second-largest economy in terms of nominal GDP ($14.14 trillion) and the largest in terms of purchasing power parity (PPP) GDP ($27.31 trillion).

No shit, even those "geniuses" in Congress are now using PPP (Purchase Power Parity) metric when talking about economy. Evidently a fraud of "nominal" US GDP doesn't do it anymore even for them and forces them to look at still highly inaccurate but more realistic measure of economy expressed through PPP. In real terms, however, there all reasons to suspect that the actual size of US economy is hovering around $10-12 billion and when adjusted vis-a-vis Chinese economy is probably 2.5-3 times smaller. But enough about China.

Designate Russia as a State Sponsor of Terrorism for its support of the Iranian Islamic Revolutionary Guard Corps, Hezbollah, the Taliban, and the Russian Imperial Movement.

I do not pay attention to economic "sanctions" on Russia since the United States are inconsequential for Russia economically, being practically non-entity and, as I say not-stop for years--sanctions are very good for Russia, who, by now, also has all things in place in case these "strategists" kick Russia out of SWIFT or attack Russia's sovereign debt. Sure. But declaring Russia a State Sponsor of Terrorism is serious (I omit here the fact that Taliban is officially declared a terrorist Organization in Russia, but operating with facts is not a strong trait for US legislators), because it will lead, for already sinking US, to international repercussions on a major scale. You may partake in US Department of State wisdoms on a state sponsorship of terrorism here. But sanctions on such "sponsors" include things of this nature:

As you can see yourself it is a check list for averting losing in military and economic field under different pretexts and, as facts have it, the United States is not just losing, but lost arms race to Russia, while simultaneously being humiliated in every single conflict she embroiled herself into and, of course, the irritation and extremely painful effects of losing an oil war are very telling. Do you recall, five years ago I warned that Russians are wrong people to fvck with? You can browse this blog 4-5 years back. And here is today's spread. 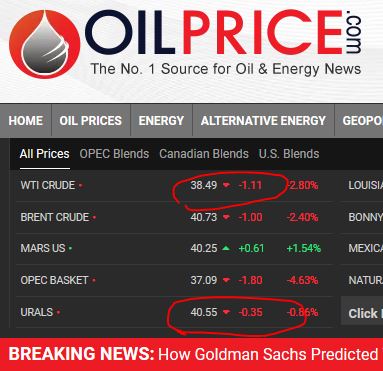 This is what really drives Republican desperation. With headlines like this:

The U.S. shale-oil industry may collapse due to the sharp fall in oil prices because of the coronavirus pandemic, a new influential report predicts. The demand for and price of oil tumbled due to the economic slowdown and have since begun to recover, but Australian think tank the Institute for Economics and Peace warns that a low price will affect political regimes in the Middle East, especially in Saudi Arabia, Iraq and Iran. The impact of coronavirus may 'result in the collapse of the shale oil industry in the U.S., unless oil prices return to their prior levels.'

One may totally expect Russia to be designated evil incarnate soon and I will not be surprised a bit, honestly. As I stated some short time ago, I increasingly do not buy this "Saudi Arabia started the oil war" concept, because behind Saudis was the United States whose "defense" cowardly Saudi princess ultimately depend on. Not that it is any good, but better than nothing, I guess. Saudis went against the US? Oh, please. The bluff was called, again, and the US, as that proverbial old hack grandma from Pushkin's tale about golden fish granting wishes, was left with a broken trough and her decrepit house. The United States cannot forgive Russia that since 2008 almost every single US bluff or aggression were either called or checked. Those who signed this sheer "strategic" idiocy also need to understand that Russians know for a fact that they, not just as a country, but as a nation, as an ethnicity, as a culture, as a race are mortal enemy for the US establishment and that is why Russians are back into their ultimate national survival mode, of which NO US Congressman or Congresswoman, none, zero, have any clue let alone experience with. That is why they are losing no matter what "strategies" they invent--all of them are predictable, primitive, are anticipated and are already countered. I can understand their frustration.

But on a practical side of the issue, I really struggle with grasping a sheer nuttiness of this all since they still do believe that they can win some sort of conflict with Russia on the battlefield. Plus they still exercise this illusion expressed in this pearl of Republican strategic (lack thereof) "thought":

Didn't late McCain once communicated directly with Russians and was laughed at by most Russians.  Maroons still do not understand that they know nothing about Russia, which is expected of them. They feel that they are losers but they don't know, they still struggle to put a finger on it. I can only scratch my head in disbelief. They really cannot grasp  that they are viewed in Russia as a bunch of midgets and Russians, overwhelming majority of them, wouldn't even share a same acre with these Republicans when taking a dump in the field. I can only suggest to them to get a hold of themselves (you know, hope springs eternal) and try to do something for their country, while it is still intact and, FFS, learn the goddamn real history of Russia. The Russian Navy is older than the US and throughout history Russians dealt with enemies compared to which all of them in D.C. are a bunch of corrupt amateurs good only at self-promotion. So, I dare the US Congress to designate Russia a State Sponsor of Terrorism and then see what happens.
Posted by smoothiex12 at 8:44 PM