No Shit. I Don't Remember Which One.

So they begin to suspect, now. This is not to say that Bismark necessarily was wrong when stated that Russians do not take a dump without a plan, but somebody finally begins to suspect something. Something they can more or less put their finger on. My disclaimer: I am not specialist in oil extraction and processing technologies, nor am I an oil market specialist, but this looks down right funny. 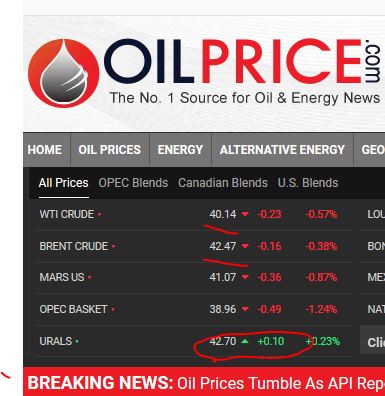 So, now somebody turned on their strategic thinking and concluded that:

In his relatively brief stint in power, Saudi Crown Prince Mohammed bin Salman (MbS) has managed to destroy the Saudi economy in record time while also sullying his own reputation and endangering Saudi Arabia’s geopolitical relations with the murder of journalist Jamal Khashoggi. Now, it appears that there is another calamity in the making for MbS. Russia is currently offering him all sorts of benefits in exchange for his consideration of a deal. The deal, though, is pure poison - for him, for his family, and for his country - and it involves Saudi Arabia switching its core alliance from the U.S. to Russia. In exchange, Russia says it will guarantee the future safety of Saudi Arabia, including from Iran-backed threats. A timely reminder of Saudi Arabia’s current vulnerability to the continued threat that Iran and its proxies pose it – one of the key threats that the deal with Russia would eliminate, the Kremlin has said – came in the form of the attack on Tuesday 23 June when the Saudi-led military coalition fighting in Yemen intercepted and destroyed eight booby-trapped unmanned aircraft that were targeting civilian objects and civilians in Saudi Arabia.

Oh, that was so not self evident (wink, wink) that anyone with the IQ slightly higher than room temperature could have predicted it. In the matters of crude my IQ is slightly higher than room temperature, but the recent events, such as this, put forth a purely political issue which is even more important than any budget considerations for the Kingdom--a survival of its top (whatever they are in relation to each-other) and while the US doesn't have this most prized, hottest and most expensive commodity ever, Russia surely has it and she is ready to bargain--political stability under Russia's military umbrella is a very real deal. That is why there was so much hysteria in D.C, in 2015 when Russia deployed her forces to Syria--it was clear that this was a real deal. Bashar Assad is still around, isn't he? So is Maduro. So, the author of this piece arrives to a "no shit" conclusion that Russia joined OPEC+ to:
I always have a simple recipe for all those authors and award-winning journalists--study military balance. I know, I know--it is a very difficult task, because US media mostly supply propaganda and BS and learning things by yourself requires more than just degree in journalism or stock trading. Well, c'est la vie, as they say in Germany. Always look at the real military balance and a lot becomes obvious. I would say that Simon Watkins (the author) arrives (granted, too late) to a correct conclusion when states that:

“Russia has highlighted to the Saudis that it is due to spend nearly US$500 billion on U.S. defense purchases in the next five years but that last time around – with just the Houthis – none of this was any use,” the source told OilPrice.com last week. “On the other hand, the Russian air defense system – currently the S-400 but soon to be the S500 for general roll-out – is regarded by many as the most effective in the world,” he said. In fact, provision for precisely this switchover was made in the 2017 visit to Moscow by King Salman. According to various sources, the state-owned Saudi Arabian Military Industries also signed a memorandum of understanding with Russian state-owned arms exporter Rosoboronexport to buy the S-400 air defense system, plus the Kornet-EM anti-tank guided missile system, and the TOS-1A multiple rocket launcher and thermobaric weapons system, among other major arms purchases. Crucially for Russia, the agreement not only covered the supply of all of these weapons systems to Saudi Arabia and the transfer of necessary adjunct technology but also the manufacturing of these systems in Saudi Arabia, overseen by relevant Russian engineering and technical personnel and Russian security forces to ensure the safety of the people, the plants, and the products, at key sites on the ground in Saudi.

Not only this product is much more affordable, it actually works, Russian base at Khmeimim in Syria demonstrates this constantly by shooting down.... drum roll... ALL hostile aerial targets around it and this includes swarms of hostile drones and rocket propelled projectiles. Plus, Russians do not do "color revolutions", unlike the US which not only destroyed number of countries by removing their "regimes" but is actually doing it to herself now. If you are a Saudi prince, will you trust these nutjobs? Even if you are not a Saudi prince, but some average Joe (or Ivan) you wouldn't take this seriously either. Plus, of course, this chronic malaise of the American "elites"--a total inability to deal with both cause and effect of events. And inability to forecast anything short term, forget mid to long term forecasts which in the combined West, for some reason, are as reliable as a regular bowel movement in a senior retirement home.

In the end, let's face it--Russia has no benefits from negotiating pretty much anything with the United States. Zero, nada. So, why would Russia, who sells a very good chunk of her Urals crude to the US really care about what US oil industry does as long as it is removed from position of any control of the global oil market together with her Saudi lap dog. Once revenge is served cold, one may, after that, offer a helping hand. It is a typical Russian idiosyncrasy--not to beat those who are laying down. Maybe it should change. Meanwhile, enjoy, if you will, Victory Day Parade from Moscow. It should start shortly.
Posted by smoothiex12 at 9:27 PM