In Continuation Of The Crash.

While Dow Jones, which allegedly is an indicator of an "economic" health, or otherwise, of the US (and "global") specula...ahem, economies, is searching for the bottom somewhere in the depths of Wall Street and US financial fraud and extortion universe, let's see what Saudis, who think themselves smart and wonderful people are facing. Saudis declared that they will flood the world with cheap oil. Sure, why not. As some sources say, the "cutout" price for Saudi Arabia, that is when extracting stops being profitable, is somewhere around $25 per barrel. But let's take a look at Saudi 2020 Budget: 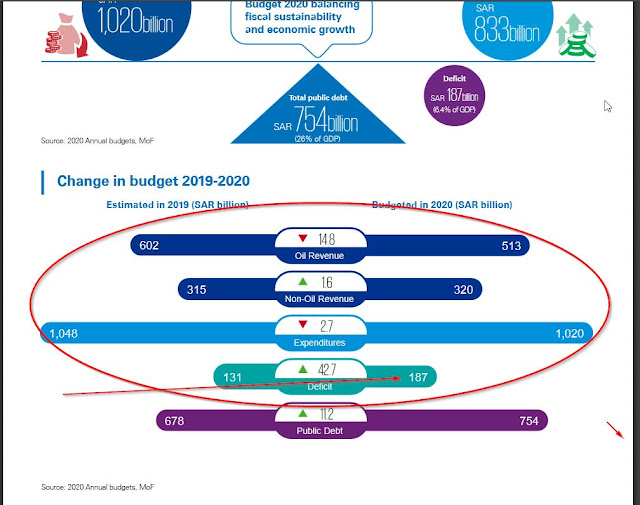 As you can see, Saudis, at the time of drafting this budget were optimistically thinking about some non-oil revenues (sure, gas or byproducts are already considered "non-oil" revenue, right?), but no matter how one sugar-coats all this budget and lovely graphics, one cannot fail to notice that (as red arrow points to) this crucial budget deficit of Saudi Arabia is not only gigantic (187 billion Ryials or $50 Billion) but tends to grow, while Saudi Arabia has very little to offer to the world other than hydrocarbons and exclusively Muslim tourism, known as pilgrimage, or Hajj. That's it. Even Bloomberg notices that:
Saudi Arabia’s Economy Can Ill Afford Oil-Price War It Started
Of course, it cannot. In fact, correct me if I am wrong, Saudis are living constantly (and dangerously) with their huge budget deficit and for a nation whose currency is directly tied to US Dollar and price of oil, it needs to finance somehow the habits of its population which still lives in middle ages and doesn't like to actually do any serious productive work. I do not consider driving Ferrari in the morning to some bank's branch in Riyadh to be a productive work in any way. So, Saudis, who are probably consulted by all kinds of old CIA spooks and other people who have zero real expertise in Russia and in real economy decided to go for the old (anti) Soviet trick--to kill Russia's economy with low oil prices. Sure. The problem, though, is in the fact that Russia IS NOT Soviet Union, which needed to carry on its back tens of millions of freeloaders from all those, now "free" from Russia, Soviet Republics (especially all kinds of Stans) but, as even World Bank notices: 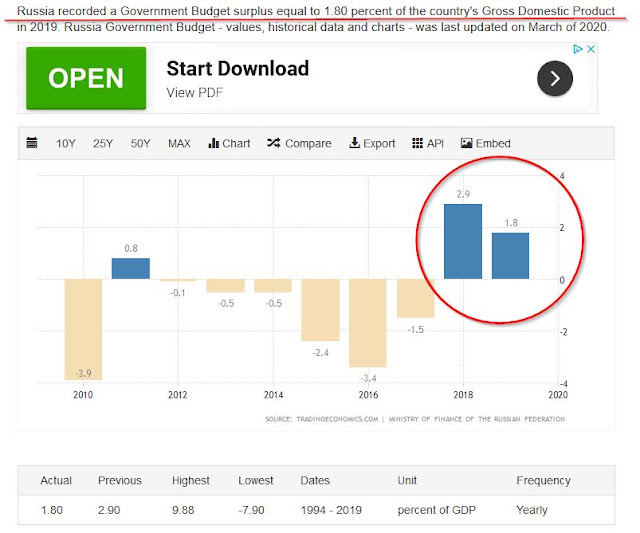 Yes, yes, not only those Rooskies live with surplus in their budget, but they can painlessly allocate $150 billion to deal with whatever, for at least 10 years. Mind you, National projects are going full ahead and there will be (will be? It is already there) huge fight for those almost half-trillion USD by all kinds of foreign parties. You see, direct buying of the machines alone has more than $50 Billion allocated (and how many is indirect)--can you imagine what a fat piece of pie is that. Plus, Russia, unlike KSA, does stick to the plan and in 2017 already stated that oil and gas revenues only account for one third of Russia's budget revenues. Judging by 2020 budget, one can see that with the surplus budget, Russia's revenues from hydrocarbons and their processing will constitute around 36% of Russia's budget revenue. You decide yourself what is the share of oil in those 36%. But unlike Saudis, Russia produces everything else and most of it is for the internal market. Do I hear the word "autarky".

Of course, it is not exactly an autarky, but, do you see THIS difference for 2019? 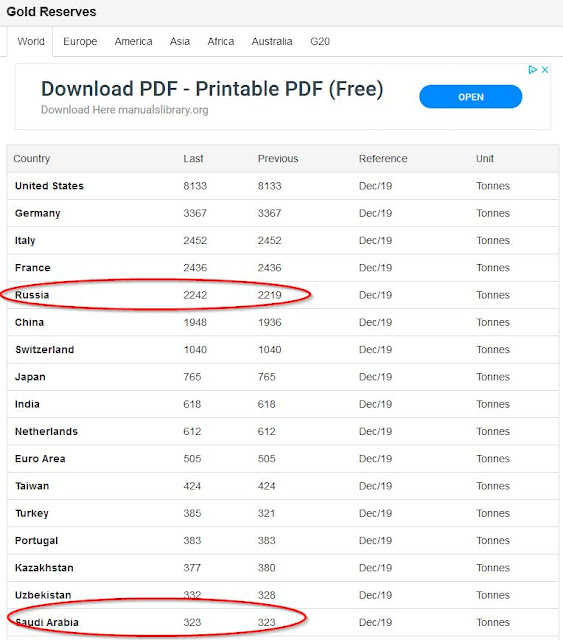 That may help to explain why Saudis are going nowhere, because, as I write for years, tangibles win in the long run, and even if to imagine that somehow Saudis will survive next 4 years without consuming their $500 billion worth of reserves (sure, and I am Clint Eastwood) in the economy which produces next to nothing, Russia's National Projects will be already in their full steam and those are ranging from cutting edge research, aerospace, machine-building complex and other things of which Saudis have very little understanding. One doesn't play waiting game with superpower. Especially with one which is really pissed off with the chaotic murderous state the world was brought into, while historic Russia was learning her most important lesson the hard way, as was declared by Alexandr III: "Russia has only two allies, her Army and her Navy"(c). Let's add here VKS, and Strategic Missile Forces and that should wrap it up. I would suggest to listen to that, it is absolutely relevant:
This is how you grow real elite.
Posted by smoothiex12 at 1:13 PM