Are You (Fvcking) Kidding Me?

Russians have proverb: impudence is a second happiness (naglost'--vtoroe schast'ye). And when you think that you saw it all, bang! And it is Ukraine. Rada's (Ukraine's parliament) MP with a typical Ukrainian name Vadim Rabinovich, speaking to Ukrainian outlet NewsOne proposed to ask for help... from Russia. Here is video (in Ukrainian/Russian):
And in Russian from Ria.

I am still in shock and am trying to lift my jaw from the floor. But before I proceed, Rabinovich proposes to Ukraine, after, by his own admission, listening to Putin's "Covid-19" Address to Russia, simply to copy this program and... apply it to Ukraine. He says that if ever-sanctioned Russia can do this, then Ukraine, and I quote, "supported by half-the-world" certainly can do this too." You know what follows: 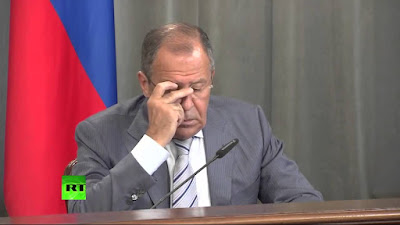 One comment from the Rabinovich's video summarizes it really well:

This is precisely the attitude of overwhelming majority of Russians both in Russia and around the world towards...no, not to the shithole of a country which Ukraine is...but towards Ukrainians. I was going to do a separate write-up on Ukraine, but this whole thing is so surreal, that I had to comment on it. Rabinovich is, obviously, delusional, which is a normal state of not only Ukrainian "elites" but majority of "Ukrainians", who, in addition overwhelmingly consider Russia to be a hostile state (in Russian), while large parts of their society still think that Ukro Army fights Russian Army in Donbass. I will omit here the description of Ukrainian media as an asylum run by patients, but I have to state a thing which I repeat ad nauseam: Ukraine is anti-Russia. It cannot exist in ANY other form for a number of major historic, geopolitical, economic, cultural and other reasons. I do, however, give Ukrainian "nation" the right for metaphysical existence, because this nation did coagulate around central idea as a political nation. This central idea is primarily a combination of kindergarten-level fantasies, down right delirium and and of radical Russophobia.

And here is Ukrainian problem: nation built on those ideas cannot create a viable state in principle, unless such a "state" is a failed state and Ukraine is more than a failed state, Ukrainian nation is a failed nation. Because it needs to constantly prove to themselves that they are not Russians and this has to be done against the measure of Russia as a country. Truth is, Russia is economic and military superpower, Ukraine is a decrepit, backward, dirty place, populated with increasingly irrational population, which still dreams about "integration" into EU and NATO, not understanding that it is needed there only as a ram against Russia to be eventually used and thrown out as used condom after intercourse. This time has arrived. First, EU as a whole is a joke and it is on its way out, the US is facing existential crisis which makes 2008 crisis look like a Nerf gun against 152-mm howitzer. Most importantly, Russians DO NOT want to help Ukraine. In fact, majority of Russians do not want to hear anything about the country which hates Russian guts due to this nation being a loser on a historical scale, getting in 30 years since its independence, from one of the most economically developed former Soviet Republics to a main provider of toilet cleaners and strawberry pickers to Poland and a variety of prostitutes both to Russia and EU.

Most insulting for Ukrainian mentality, moreover, is the fact that Russians live better than them, much-much better. Russia's per capita GDP is 3 times that of Ukraine, in reality even higher. Much higher.  I would offer you all to do a little bit of comparison of two respective capitals of Russia (Moscow) and Ukraine (Kiev), their transport and street infrastructure,  done in Autumn of 2019. No knowledge of Russian language is necessary, except for knowing the fact that many Russians (justly so) were incensed with this comparison of Kiev to Moscow, stating that comparison should be with smaller Russian cities in provinces, granted that even those would make Kiev still look as the capital of the third world shithole. So, enjoy (who wants) the video and pay attention to the faces of people in respective cities.
So, now they want Russia, after they are still hard at work in D.C. lobbying for more sanctions on Russia and trying to sell the only product they have which has value in the West--Russophobia--to help them? Nope. Let them deal with all that completely on their own--not a single Ruble should ever be spent on this country and its people. They wanted independence and European "integration"--let them have it. Russia needs to get busy building cordon sanitaire around this shithole, and close borders for most of those lunatics. They have their own "government", Rada, President and EU with the United States. Let them ask Lieutenant-Colonel Vindman to lobby Ukraine's interests in D.C. (this American "hero" knows how to do it) and ask DNC to provide help.  After all, there is always Canada with its massive Ukrainian diaspora. As Rabinovich stated--half-the-world supports Ukraine, so let it, leave Russia out of it. Build A WALL, Russia.
Posted by smoothiex12 at 1:54 PM