We are already living in a new reality and while everyone's attention is concentrated on Covid-19 or, in many cases, at stock market, life goes on and events no less, if not more, important than coronavirus pandemic, continue to unfold. Russia-Saudi "oil war" is one of those events and there are many POVs on that. Does Russia want to break Saudis? Possible, but most likely Russia's objectives are larger than that and the main target is OPEC as a whole. Behind OPEC is an American shale oil industry and, as Scott Ritter arrived to the conclusion today, could be Trump's Administration itself. Russians have had enough with the United States for a while now and, unless one is a paid operative of US Department of State or numerous US NGOs in Russia, no one exercises any illusions on the subject of the United States being a radical anti-Russian force. Ritter, correctly (almost), notes:

While President Trump entered office fully intending to “get along with Russia,”  including the possibility of relaxing the Obama-era sanctions, the reality of U.S.-Russian relations, especially as viewed from Congress, has been the strengthening of the Obama sanctions regime. These sanctions, strengthened over time by new measures signed off by Trump, have had a negative impact on the Russian economy, slowing growth and driving away foreign investment. While Putin continued to show constraint in the face of these mounting sanctions, the recent targeting of Russia’s energy sector represented a bridge too far. When Saudi pressure to cut oil production rates coincided with a global reduction in the demand for oil brought on by the Coronavirus crisis, Russia struck.

Trump, in the end, turned out to be more hostile anti-Russia POTUS than even Obama. In fact, from the get go Trump surrounded himself with a cabal of professional Russophobes and continued to slap sanctions on Russia non-stop. This is not the way to deal with another superpower, especially when your hand of cards is weak and the only weapon, blunt and inefficient at that, one has is sanctions. I disagree with Ritter here in terms of "negative impact", I said it many times and I can repeat it again--sanctions are good for Russia. Now, this my, and many others', POV is confirmed by none other than Putin himself:
As I warn non-stop: Russians DO NOT count their economy in terms of "capitalization", "foreign investments" and "stock market", in fact, all this Western monetarism is not economic science at all and cannot be applied to Russia. Russians count their economy in terms of what and how was produced, how much did it affect wages, pensions, what are the demographic trends, how to deal with them, how many kindergartens were built, how many new schools etc. Russians count in tangibles. And while Russia IS making Saudi Arabia's life a living hell, pushing it towards insolvency, there is no doubt that doing so Russia keeps US in mind. As Ritter concludes:

Russia is unlikely to fold anytime soon. As Admiral Josh Painter, a character in Tom Clancy’s “The Hunt for Red October,” famously said, “Russians don’t take a dump without a plan.” Russia didn’t enter its current course of action on a whim. Its goals are clearly stated—to defeat U.S. shale oil—and the costs of this effort, both economically and politically (up to and including having Trump lose the 2020 Presidential election) have all been calculated and considered in advance. The Russian Bear can only be toyed with for so long without generating a response. We now know what that response is; when the Empire strikes back, it hits hard.

The reason Russia can do that is because there is no military or, in general, "power" solution for that, because Russia controls escalation as it usually does in military sphere. As Putin was mistranslated in his interview (I posted above), he didn't say "to hell with sanctions", he said "we spit on them". This is exactly Russian attitude today towards the United States. This is the pinnacle of disregard which would give aneurysm to a vast majority of a corps of US Russia "experts" who get paid to develop the most risible narratives about Russia, which even US court system wouldn't be able to take it anymore. US-Russian relations have been damaged beyond repair and Russians, correctly, view the United States as a main culprit. But if the United States also got itself into the fight with China, there are some other news which may give the United States a shiver--it is practical implementation of the transport corridor North-South, with Azerbaijan "spooling up" (in Russian) its cargo transfers, while  Russian view this corridor not only as an alternative to Turkish Straits but as the main trade artery in trade between Russia and India (in Russian). Port Olya near Astrakhan seems to be operating on steroids, increasing it's cargo operations by 145% in 2019.

But here is another thing. here is the map of this corridor: 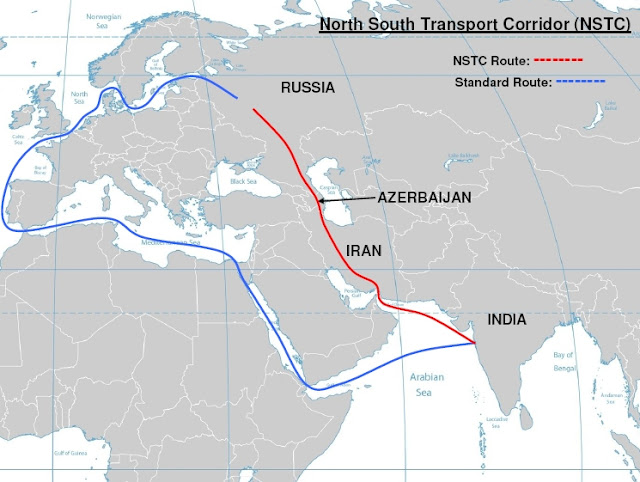 Looking at this map, do any of you ask what is conspicuously absent from this map? Right, China is not there and she is not supposed to be. In fact, this route must have nothing, zero, to do with China and it is rightly so. As I repeat ad nauseam--for all my sincere respect to China--Russia and China are neighbors, they are not strategic allies, in fact, in the future which is emerging as I type this, Russia and China will be competitors. No, I am not against cooperation: CR-929 promises to be a wonderful project, possible Moon Station? Sure, I am all for, but the logic of economic development and emerging new alternative model for the European (whatever will be left of them by then) people comes from Russia, not China--it is a hard, cold fact of culture which cannot be changed. Russia IS creating alternatives as I type this, and those are for facing China, not even hostile West, in the long run. I will refer all of you to Putin's sensational speech at Valdai in 2017--just listen what he is talking about, attentively. West is corrupt and decadent, and is in steep decline, but does it mean that white Christian-root population does not have the right to live? Or to have its own historic realm? West was betrayed and sold out by its elites in a complicated game which is now almost 80 years long. But many European people will, and already do, look to Russia as their last hope. We are at the historic nexus beyond which the future looks fuzzy, hidden in the fog of uncertainties and I am not Third Stage Guild Navigator to see that far, but as often is the case, it seems that the real task of saving European people, not the degenerate and corrupt political and economic systems of the West will fall to Russia. This is 2013, Russian Marines in Greece. People are civilization. Not governments.
Posted by smoothiex12 at 1:18 PM