There is an OPEC issue which popped up in the last couple of days--it is sudden realization that OPEC doesn't mean that much in terms of oil production (or cuts in it) without...yes, Russia. It occurred to Forbes that:

Damn, those Rooskies weaponize everything, from sausage, to cartoons to oil production. But the truth of the matter is that in reality, unlike it was the case with Masha and the Bear, Russia DID "weaponize" oil production because... because... because she can. As Forbes is longing for those higher oil prices to return, it notes, in desperation:

No, Russia is not bringing those prices back, not yet anyway, and there were already events which may testify to a rather grim mood in the Kingdom of Saudi Arabia which is the backbone of OPEC. They uncovered yet another coup conspiracy there. Oh, boy. But what are those proverbial cards Russia holds? Two of them:

1. Russia's economy, as I, and others, write about for years and years IS NOT hydro-carbons' extraction and export dependent or oriented. Not only Russia's non-hydro-carbons exports was shrinking  relative to Russia's other exports (in Russian), but Russia's military and agricultural exports become increasingly important, together with other high value added exports. This is not to speak of Russia's budget being formed primarily by other, non-raw materials, contributors. But as I repeat ad nauseam, people who calculate economy in US Dollar "values" fail to comprehend this fact--they simply have no frame of reference other than the speculation bubble of financial markets.

2. Russia is military superpower, period. Anyone wants to fight Russia? Well, I am sure there are some lunatics out there but even NATO knows that it stands no chance, despite all chest-beating and posturing.

So, Russia goes about it her own way: she will continue to extract geopolitical and economic favors for herself while simultaneously pacifying the region, Middle East and adjacent regions that is, because only peaceful and stable region insulated form "activities" from Gulfies' satrapies and the United States allows to form real market there and then shape it as a reliable recipient of Russia's goods, real, tangible ones. Such market must be stable and peaceful. So, that's the message from Russia to OPEC and others. As you can see yourself, investments into real cutting edge weaponry, which is predicated on a development of modern industry (as in manufacturing) is a very wise investment, when one counts own country not as some collection of individuals but as a nation. Raw power matters and it wasn't Russia who established these rules.

In related news. Russia's Black Sea Fleet and Southern Military District are on the verge of morale and discipline breakdown and Russia is about to abandon Crimea because the United States are supplying Ukraine with mighty Mark VI patrol boats:

According to CNN, the new assistance package includes counter-artillery radars and armed Mark VI patrol boats, the latter of which is seen as particularly important given Ukraine’s tensions with Russia in the Black Sea and the Sea of Azov.The MK VI designed to fulfill the requirement for an armored boat with greater range, more lethal firepower and sea keeping capabilities that exceeded the Navy’s small boat capabilities. They can conduct missions in the open ocean for protecting defence forces. The versatile patrol vessels can support search-and-seizure operations, maritime intercept operations, theatre security cooperation operations and other clandestine security force activities. They can function as escorts for high-value assets and also take part in mine hunting and fast attack combats. The 85-foot-long vessels averaged a speed of 25 knots, just under 30 mph.

Make no mistake, those are nice boats, it's just that they are good only, once one discards all fluffy Pentagonese descriptions of those, for.... being sunk in case of doing stupid things in the Sea of Azov or Black Sea. It takes single SU-30 SM with anti-ship (ground-attack) package to...well, you know. 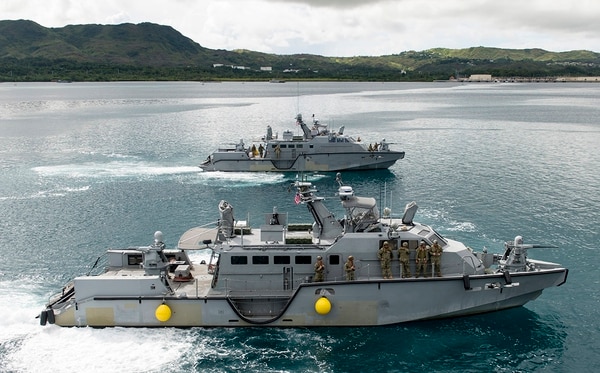 Nice boats, indeed, and you know my soft spot for Mosquito fleet.
Posted by smoothiex12 at 12:06 PM