Bernhard Of Moon Of Alabama Nails It.

Here is German whose opinion on Boeing I, being Russian myself, share completely.

It is sad to see a once great company going down over the incompetence of such men.

My sentiment exactly. Has been such for many years. Boeing is more than just American company, for decades it was a symbol of great quality and great airliners. Yet, Bernhard is spot on when he writes:

Boeing had stopped the final assembly line of the 737 MAX because there was no more room to store the more than 400 produced but grounded new planes. It will take more than a year to clear that inventory. But Calhoun now wants to restart production even before the MAX is allowed back into the air. This is beyond silly:


He said Boeing plans to restart the 737 assembly lines in Renton months before the Federal Aviation Administration (FAA) approves a return to service to ensure that production can be restarted with maximum efficiency.“We’ll start it slow so we can practice and practice. That’s a bit of a silver lining in the [production] pause.”

That is an insult to Boeing workers. They do know how to build planes. They do not need more 'practice' but a management that is aware that pressuring workers will not produce better planes. But Calhoun is not interested the gritty details of manufacturing good airplanes. It is all about the shareholders, the only group that counts:

Calhoun said Boeing is not planning to cut or suspend the dividend because Boeing has the “financial capacity and capability to do the things we need to do.” Calhoun said he “will stay on that path unless something dramatic changes.”

So Boeing will take on $10 billion of additional debt to pay dividends and will hike is lobbying spending even while it does not have the cashflow to develop new airplanes.

Get it? It is all about dividends. But then again, who IS Mr. Calhoun? There is precious little about his REAL background except that his education is in accounting. Why I am not surprised with Boeing's not only current pathetic state but also a very dangerous one? The guy who is a bookkeeper (and yes, spare me this BS general title of "businessman") running the place which requires an enormous amount of STEM education and expertise. What the fvck are they doing to more than just national treasure but to an international symbol of air travel? They are literally killing the company. Here is another note-worthy point:

It takes at least 7 years and some $10 to $15 billions to create and certify an all new airplane. Airbus already has some 60% of the large jet market share with Boeing having some 40%. Pushing back the launch of the New Midsize Airplane (NMA) means that Boeing will have nothing new to offer throughout the next ten years. Without a new plane Boeing's market share will slip to 30% which is less than the minimum one third it needs to survive in the duopoly.

The MAX, though, is here to stay. Calhoun said he expects it to eventually reach parity with the Airbus A320neo. He dismissed a suggestion that the MAX may never fly again, or will be renamed to disguise its history, and said passengers’ confidence in the airplane will be restored.“I believe in this airplane,” he said. “I’m all in on it and the company’s all in on it.”

Well, here are some news for him: it is not just Airbus which is laughing all the way to the bank, B-737Max is not a competitor to Russian MC-21, which will inevitably replace ALL B-737s flying inside Russia (which also explains Irkut planning ramped-up production) and already has many firm contracts from Aeroflot, Red Wings and others but, as news have it (for admirers of China's progress it will be a very cold shower), other things come into play here. As rumor has it, Chinese, who already pushed own certification of their COMAC-919 back to 2021, may, actually, face a cold hard reality that this aircraft may have bigger problems than delay of certification. As Aviation Expert reports:

Translation: Delays during creation of new samples of aviation technology are nothing new--it is a widespread phenomenon. Never in history new design ever achieved ideal from the first attempt, without necessity for improvements. However, inability to implement such improvements over such a long time--delivers a serious  blow to China's reputation as a new player on the global market of commercial aircraft, especially after investing such a massive effort into its first attempt to be competitive with Boeing and Airbus.


Evidently some serious mistakes in calculations have been made, which affected data required to be sent to engine manufacturer CFM, plus, at this stage all COMAC 919 prototypes spent less than 20% of required 4, 200 hours in the air required for certification. As you may remember, I was skeptical about COMAC from the get go. COMAC's only competitive advantage is its allegedly lower cost, which, most likely, if this aircraft ever to enter large-scale production, will be "financed" by government. Meanwhile, Russia's MC-21 already has a preliminary certification from EASA and, what is very important, has a certified PD-14 own engine. So, you get my drift, do you? I'll give you a hint: SU-35, S-400 and now Russia helping China to develop Missile Attack Warning System. Well, after all, what is CR-929 with PD-35?

Now, ask yourself a question what Airbus and UAC (United Aircraft Corporation) think about not only Russian market, but gigantic Chinese one, especially with Boeing being taken down by its incompetent management in the most important and profitable segment of narrow-body middle-range aircraft? Russia, sure as hell, knows that she will have some, initially small, share at Middle Eastern market, larger, most likely, at African one and she has a shot at a good slice of Chinese one once MC-21 goes on-line in 2021. Boeing, I think, doesn't have those 7+ years to develop something completely new instead of good but dated B-737 design. So, make your own calculations, including an increase of sanctions on Russia in a desperate attempt to delay a full russification of SSJ-100 and the launch of MC-21 into full-scale production. Russians do not really care anymore, plus, unlike Boeing, UAC features not only competent management, but extremely competent engineering corps and it really caters mostly to Russia's State as the most important shareholder. UAC doesn't see itself as a direct competitor on a global market, after all, here is the UAC's forecast, but it was in 2017--things changed since then dramatically. 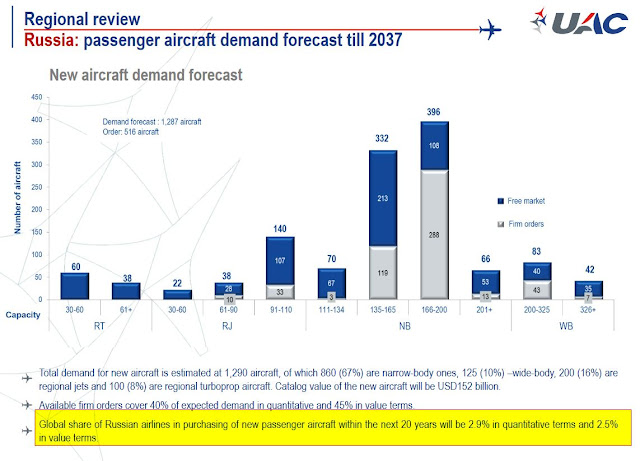 In 2017 nobody could have predicted, let's call it what it is, a catastrophe with Boeing which more and more looks to me as some deliberate attempts to sink a legendary and trusted aerospace giant. But then again, someone, it seems, wouldn't mind splitting the United States into few statelets. All this, as bizarre as it seems, feels like an invisible, behind the scenes, Liquidation Committee or is it just the logical conclusion to a short era of collapsing financial capitalism which cares only about "bottom line" and poor-poor fat cats shareholders who cannot afford another Ferrari (or Maserati) for their harem. I guess, we'll know the answer soon.
Posted by smoothiex12 at 10:57 AM