It is as real as it gets, albeit, in our world full of recording devices it inevitably becomes a food for speculation. A 96 year old veteran of breaking the Siege of Leningrad, in the city of Smolensk can barely walk anymore. But as they say: if the Veteran cannot come to the parade, parade comes to the Veteran. And they did it for a single veteran (Six time wounded during the war) near his apartment block.
Comments under the video speak for themselves, including, of course, bile-spewing liberda, svidomy and Baltic trolls. You don't even need to know Russian to understand what is going on.  But when even anti-establishment and immature popular Russian entertainment site Fishki gets that many upvotes on this event--that speaks volumes. 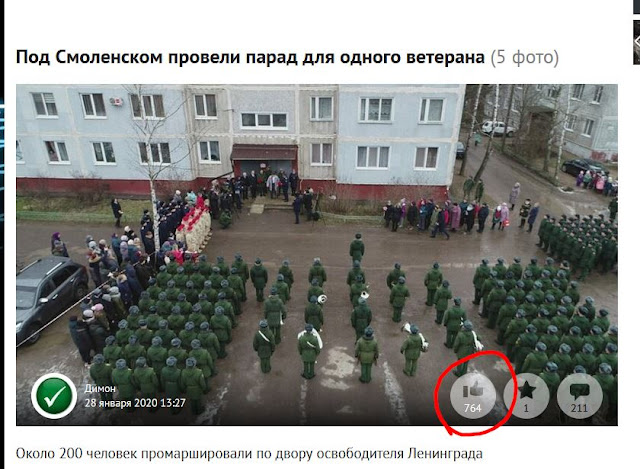 And this is the site which has a very heavy "liberal" and Ukrainian presence.
Posted by smoothiex12 at 12:29 PM

Email ThisBlogThis!Share to TwitterShare to FacebookShare to Pinterest
Labels: anniversary of Lifting the Siege of Leningrad., parade for Veteran, Smolensk