Does Russia Really Want To Sell S-400 To Turkey?

No, I get it, selling S-400 to NATO member is both good money and good image. But knowing Erdogan who always tries to play his own game, trying to leverage whatever is handy, I am sure some people in Russia are having a blast just observing this whole bargaining back and forth between Turkey and the United States. Today top military guy for Europe, General Curtis Scaparrotti weighted on that:

Gen. Curtis Scaparrotti, head of U.S. European Command, said Turkey, a NATO member, should reconsider its plan to buy the S-400 from Russia this year or forfeit other future American military aircraft and systems. He said Turkey's use of the Russian surface-to-air missile defense system would be a threat to the F-35. His comments are the latest in a series of warnings the U.S. has made to Turkey over its plans to buy the S-400. The U.S. and other NATO allies have repeatedly complained about the purchase, saying it is not compatible with other allied systems and would represent a security threat. The impending purchase has aggravated already souring relations with Ankara, including tensions over the war in Syria. Scaparrotti said U.S. officials are currently in Turkey explaining the potential consequences of the S-400 purchase. He said his best military advice would be that the U.S. not follow through with the F-35 sale and not work with an ally that's acquiring Russian systems that can threaten one of the American military's most advanced technological capabilities. "It presents a problem to all of our aircraft, but specifically the F-35," he said.

Russians know damn well what Erdogan is doing and they have no illusions whatsoever about the possibility of Erdo doing a radical 180 and then refusing to buy S-400 AD complexes. But here is the catch--Turkey is at civilizational cross-roads. She always was there geographically, but geopolitics wise she is facing a dramatic choice between increasingly degenerating Europe and some little, like you know, global, shift to the East of Turkey where new economic and geopolitical configuration is being driven by Russia and China. Erdogan, as any man of Asia Minor respects power and everyone knows today that Putin is not only powerful, but he is demi-God who is capable to elect and control the President of the United States, while personally killing Skripals and threatening all true (that is American and UK) "democracies" and in general, the guy is almost omnipotent. Erdogan likes this, but the most important question here is F-35.

No doubt, before failed coup against this very same Erdogan (and there are rumors that demi-God Putin actually helped Erdo in saving his life) there would have been very little chance for any Russian weapon system entering Turkish military mind and praising mantras to F-35 and its allegedly super-pooper technology would have been heard in Turkey everywhere. Today things are slightly more complex. Of course, the United States sells to its allies first of all well-packaged commercial product and only then a weapon system. F-35 is the case in point since behind, sometimes preposterous, claims abaout its capabilities it is rather very expensive mediocre plane. VLO, aka Stealth, today is primarily for the consumption of housewives and fanboys from all kinds of military hardware masturbatory discussion boards, plus for the purpose of scaring the shit out of some cardboard dictators in third or fourth world shithole satrapies and only if those have anything of value to be declared a danger to democracy. Reality is, modern radar and signal processing methods, such as data fusion, and technologies of serious air-defense systems, and S-400, even in its export version, is a damn serious weapon system, basically spelled the end for this comfortable self-deluded paradigm of trading combat capability for a alleged "invisibility" and few kilometers, if that, of reduced range of detection and turned it into exercise in futility against modern integrated AD systems. I mean REAL weapon systems, not some commercial product.

I know Erdo knows this, plus, let's be honest--Turkey will never get F-35 technology transfer from the United States. Russia, hm, that could be an interesting arrangement, especially once one considers where this whole warfare business progresses in the last few years. Erdogan is not stupid, he is shrewd and he will continue to hold on to this bargaining lever for a long time, trying to milk both sides for everything they got, in his mind. But reality is, it is namely the United States which Erdo wants to milk, for now, before he will try to finally orient himself and Turkey somewhere. If he doesn't buy S-400, Russia loses nothing really, those batteries will be utilized elsewhere, but Turkey still will not get technology transfer for F-35 from the US. And here is this little detail. United States increasingly works as a runaway engine and considering who really runs US foreign policy (no, it is not Trump--let's face it, the guy is a real estate developer) there are absolutely no 100% guarantees that Turkey, at some point of time, will not become a possible target herself. One has to seriously consider this when reviewing some really bizarre facts of failed coup against Erdogan in 2016. And of the death of Russian Ambassador same year. F-35 is not a good defensive weapon, especially for the price. But, that is Turkey's conundrum and let her deal with it. I, honestly, do not see Turkey abandoning her NATO commitments but the whole affair is still very interesting to observe and, boy, do I recognize this whole methodology from my visits to so loved by me markets in Baku and elsewhere in Caucasus.

The top U.S. military commander in Europe said Thursday that he is worried about the potential for new unrest in the Balkans, where there are signs that Russia is stepping up influence operations as the U.S. has lost focus on the region. “The area I am concerned about today is the Balkans actually,” U.S. European Command’s Gen. Curtis M. Scaparrotti said. “Russia is at work in the Balkans and we have kind of taken our eye off the area.” Scaparrotti, who testified before the Senate Armed Services Committee, said Russia is posing challenges in several regions. Areas of intense focus for the U.S. and NATO in recent years include the Baltics and Poland, where NATO has deployed more forces in its largest reinforcement since the end of the Cold War.In the Arctic, Russia is building up and could be in a positon to control northern sea transit lanes in a matter of three years, Scaparrotti said.

Surprisingly, he is telling the truth about Russia's Arctic ambitions, while, of course, asking for more-more-more money. But Russia, indeed, does have infrastructure, and, most importantly, largest and most powerful ice-breaker fleet in the world for controlling Arctic. Well, that plus Northern Fleet and other heterogeneous forces. Meanwhile Zvezda already is cutting metal for the third Aframax-class tanker, while building a colossal dry dock. 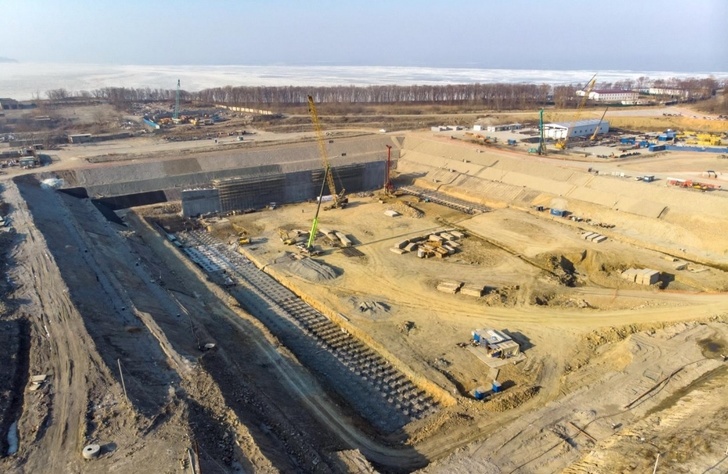 Ships are coming, big time.
Posted by smoothiex12 at 2:11 PM