Is The American Century Over For Good?

This is the title of Pat Buchanan's latest in TAC and Unz. I respect Pat in his attempts to ask hard and important questions but I always was somewhat taken aback by Pat's sense of world history, especially the history of the 20th century. In conclusion to his piece Pat asks the question:

Today, a watching world is asking: If you Americans are at war with yourselves over race, religion, morality, culture and politics, if you cannot unite yourselves, how can you unite the world? And around what? Maybe the American Century is really over.

Apart from inevitable question of who said that 20th century was an American Century, the main question Pat has to answer is what is the moment when the 20th century allegedly became an American one? Is the United States a great nation? Undeniably so! Is it a superpower? Sure! Did she have a long periods of economic expansion and high standard of living? Absolutely. It is all true but Pat has to understand that American ascendance to the top of the world started to happen after the WW II. While in 1945 world lay in ruins, the United States emerged from the war with pockets jammed with cash and full employment in the booming economy. Six years before that, however, in 1939, as none other than historians of Federal Reserve testify, the United States for all intents and purposes was an economic basket case still not capable to recover from the recession of 1937-38.

People forget how it looked then, I may remind them. Here is Seattle (with Smith Tower in the distance)--slums by desperate unemployed people, in the area where there are two giant sports arenas located today--Safeco Field and Century Link Field. 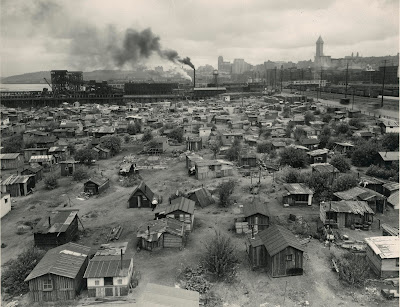 WW II literally lifted the United States out of misery. The War was a "Good War" for the United States. But nothing lasts forever and Pat, who served as a speech-writer to Ronald Reagan, really has to take a look where the tentative American Century, in reality half-a-century, even less, actually, started to go down the drain. I have a hint--look at the 1980s and two parallel processes of that time: debt accumulation and shedding of manufacturing capacity in favor of FIRE economy.  Look at this: 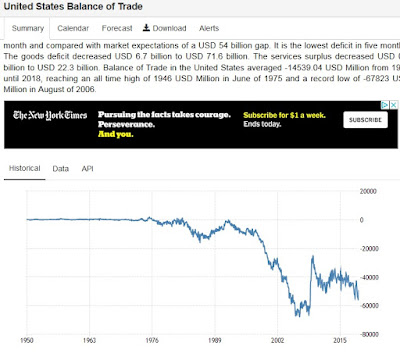 Isn't it peculiar that accumulation of trade deficit started precisely during Holy Reagan's economic policies with the US beginning to "sell" the most viable commodity then--access to the US market. Short "comeback" in 1990, most likely due to kicking Saddam's ass, didn't last--the slide down continued with some short breaks and even attempts to reverse a horrible trend but nothing could have been done with it and today the United States is the largest importer of goods in history, accounting for almost $2.2 trillion, which, when projected against US actual manufacturing capacity MAY reach somewhere upward of roughly 35-40% of American actual real economy. This is a disaster. And then, of course, there is this little thingy of $22 trillion debt servicing of which becomes increasingly problematic, while defaulting will mean a complete implosion of US economy and situation which may bring back pictures of Great Depression Seattle on a massive scale.

No amount of propaganda can anymore hide the fact that the US is "departing". The question is where to? Obviously, the idea of a debt "reset" by means of war is attractive to American powers that be, but here is a conundrum--a good scale war which will allow to softly default is impossible without the United States being destroyed in it. After all, it is not 1940. Ideas? Present American elite--utterly corrupt, uneducated and bound to interests of other states, be that Israel, Saudi Arabia or any other power with cash sufficient to buy anyone at the Capitol Hill--are not capable to develop a real plan of how to save the country without killing it. So, what could be done then? How much time do we have before excrement starts hitting the fan in industrial quantities? I don't know, but it is clear that addressing these colossal issues facing the United States, be that economic, internal, foreign policy and security will require a completely new and critical and factual look at world's and American history--only from there some ideas then could appear. Otherwise we may get a REAL American century with the United States going supernova and scorching everything around herself in the process.

Looking at who populate the American decision-making echelon today we are not 100% guaranteed from some desperate and delusional person reaching in the final moments of the American collapse for the red button. As "for good" qualifier in Pat's article? If we all avoid a war, I have to go with Dmitry Orlov's estimate--America still retains many talented and hard-working people, so she will recover at some point of time and will become the great power among other great powers and will finally be cured from her mental disease called neoliberal economics and exceptionalism. After all, to utilize wars one must be able to win them, once in a while, not the case here.
Posted by smoothiex12 at 6:57 AM