Many in the US still cannot come to grips with a simple historic fact that Monroe Doctrine was not just about Western Hemisphere being US sphere of vital interests. Here is a short reminder:

As you can see, the whole doctrine was predicated on a quid-pro-quo principle of not screwing with Europe and her possessions. Of course this whole thing was not worth the paper it was printed on once the United States solidified and started to grow in the postbellum years and suddenly recognized herself a colonial power with  pompous rhetoric about democracy and liberty serving as a fig leaf for full blown imperial conquests. Donald J. Trump is not known to be well endowed with historic knowledge so, naturally he, and many of his warmongering "advisers" concluded that:

US President Donald Trump has warned that Russia must get out of Venezuela. Two planeloads of Russian troops are currently in the Latin American country under the terms of a 2001 cooperation treaty. Speaking at the White House, Trump also warned that “all options are open” when it comes to getting Russia out of Venezuela.Around 100 Russian troops touched down in Caracas on Saturday, a show of support for President Nicolas Maduro’s government. The move caused consternation in Washington, however, with Vice President Mike Pence calling the deployment an “unnecessary provocation.”Pence also called on Russia to withdraw its support of Maduro and “stand with Juan Guaido,” the Washington-sponsored opposition leader who declared himself interim president in January.

So, when Donald J. Trump, and the whole choir of America-based Monroists, tries to convince Russia to "get out" of Venezuela they should really read attentively what Monroe Doctrine is actually about, you know pp. 1 and 2. Last time I checked the United States has more than 800 military bases around the world and, surprise, surprise, is involved in fomenting troubles, humanitarian catastrophes, support of terrorism and other activities which null and void any idea embedded in the Monroe Doctrine. After all, it was the United States which unleashed a bloody coup in Ukraine (together with her lapdogs from EU) and any referrals to Monroe Doctrine and its principles are just for PR. United States through its incessant aggression around the world since 1999 lost any moral and judicial grounds to demand anything from anybody. The ongoing coup in Venezuela, with all my huge reservations about "lefty" Latin American regimes, is a blatant violation of Venezuela's sovereignty and having a convicted crook and neocon such as Abrams (supported by draft-dodger and coward Bolton) as a handler of Venezuela pretty much answers all questions who is behind events in Venezuela. I omit now a criminal role of propaganda and disinformation US media play in all this affair--by now no one should be surprised with that.

So when chicken hawk Bolton proclaims with pathos that:

The United States will not tolerate hostile foreign military powers meddling with the Western Hemisphere’s shared goals of democracy, security, and the rule of law. The Venezuelan military must stand with the people of Venezuela.

And Trump threatens with "all options" being opened, they should really consider some few cost-benefits factors in case (and it may happen) of US attacking Venezuela with Russian advisers in it. Never mind the fact that militarily a hundred or so military personnel, primarily IT people to help Venezuela fight off those "strange" electricity blackouts, are not really there to set up a base or anything of like.  Even Bloomberg gets it. Russia knows that the US now is in full blown attack on Nord Stream-2 and that new (what round? Number 100?) sanctions are coming, but Russia doesn't care. Why Russia doesn't care? Few factors:

1. Militarily Russia can annihilate conventionally any combination of threats in Eurasia. This capability only grows with time and US knows this. Pentagon has to live (and it tries, actually) with the fact that it neither has forces nor force structure to win anything conventionally in Eurasia in general and especially in Russia's immediate vicinity. 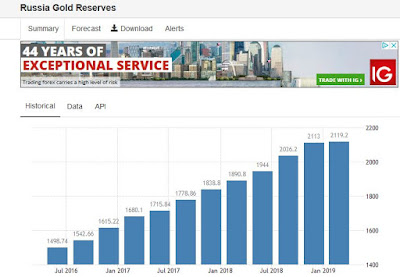 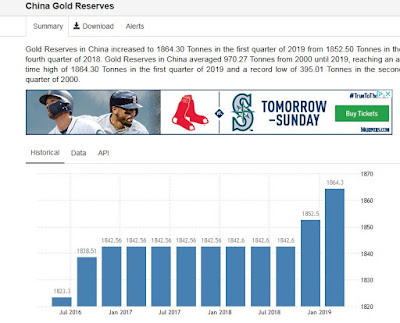 And I mean physical gold, not those funny papers which pass for gold on all those speculation platforms such as Wall Street and other so called "exchanges".

What you see is the death of a US Dollar in progress. The US simply ran out of her military luck and ability to "color revolutionize" serious players. It also ran out of ability to bomb those--how can US bomb China or Russia, or India? Did anyone even calculate the consequences for the US? Once the United States stops being able to overthrow or bomb into submission nations which prefer to trade in own currencies and in gold, you already guessed what is going to happen with grossly overvalued US economy and US Dollar. Remove US military "power" from equation and then just dismantle present US-based global financial system one country at a time. As per Venezuela, will see where it all goes. In my mind the best way to do things would have been US and Russia secretly negotiating some kind of settlement but I doubt today, seriously doubt it, that there is much time left for that or that US has competent people on its very political top to negotiate anything at all. Russia and China seem also settling something really huge which both dramatic growth of Chinese gold reserves and Russia's incessant growth of the same support.

Well, this, plus a dismantling of Russia's "liberal" economic block together with massive purges of inept and corrupt administrative elite--leftovers from Yeltsin's criminal years. Paradoxically, Russian-American trade continues to grow despite all sanctions and other monkey wrenches morons in Congress continue to throw at it. Well, of course, this trade is small relative to Russia's or US' trade, but still--in few billions. I think it is too late for the US but who knows, now she has to think how US can block China, if the US even have any resources for that. I doubt she has but US still has some aces to play but are required skills there? This I don't know but something tells me--not anymore. It could have been great, it could have been new prosperous century--too bad self-proclaimed hegemon turned out to be the main reason for everything going down the drain. Time of reckoning is upon us.
Posted by smoothiex12 at 11:13 AM