Imagine, if you can, yourself losing a leg as a result of gangrene due to deep multiple shrapnel penetrations, which, in itself was a result of the shell explosion, say at Mukden in 1905, then see hundreds of your fellow soldiers killed or maimed in the extreme. Imagine, if you can, the level of pain and traumatic stress, with allowance for the medicine of circa 1900 and then imagine what will you tell your sweet-heart in the village somewhere in Russia when you will get back from the front. Imagine you, illiterate, now facing some grim options related to survival, with some of them including highly probable one of ending up begging for pocket change and food at the stairs of some church. This is a reality which very many faced during Russo-Japanese War. At least, since Crimean War the use of ether became a norm and one could survive a pain shock during amputation or extraction of the bullets or shell fragments from the body. You are not alone in this, thousands upon thousands like you flood Russian villages and cities in 1905 after a military disaster at the Far East of Russian Empire. Of course, you have a story to tell and, while walking on crutches, a blame to blame. But that is not all, by far not all. In fact, Japanese propaganda in 1905 nailed it perfectly. Having a hindsight it is easy to see that, as much as it is painful to Russian heart to admit, Japanese were well aware (well, partially thanks to British intelligence) of the state of Russian Empire. 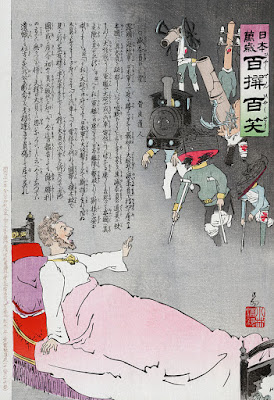 Now imagine, if you are a low level, literate, clerk in some Russian town and you read newspapers, supporting Russian Army and Fleet with all your heart, about, first, a disastrous attempt of Russian Pacific Squadron to break out of the blocked by Japanese Navy Port Arthur, with the death of Admiral Vitgeft (Withoft) and effective loss of the squadron of 6 battleships as a combat formation in a show of a decisive advantage of Japanese gunnery and seamanship. But if that is not bad enough, enter Battle of Tsushima. In unprecedented in modern history battle, Japanese Navy's Admiral Togo and his squadron, at the loss of three small torpedo boats (total 450 tons of displacement) annihilated Admiral Zinovy Rozhestvensky's 2nd Pacific Squadron (combined 127, 000 tons of displacement sunk) in the most lopsided naval battle in history. No matter how one interprets this—there is absolutely no other way around it, Japan triumphed on unprecedented scale. Even Western World was sent into shock by this development. What was happening in Russia? Do you have an idea? Can you imagine what was happening? Remember Grand Duke Konstantine's bitter admission after conclusion of the Crimean War?

This time, 50 years later, it was Asian power which bested Russia. Now, if you were what I suggested you to imagine in the beginning--would you ask the question why all this happened to you personally and the country as a whole? Yes, yes, we all know that all kinds of Russian faux "patriots", such as Solzhenitsyn, complained that Russia sent not the best troops to fight at the Far East, yes, the half-world around of Rozhestvensky squadron's voyage was perilous and difficult, but have Mr. Solzhenitsyn heard (after all he was presented in the West as Russia's "historian") about this slight "problem" of Russian shells not exploding even when they were hitting Togo's ships at Tsushima? Have he ever elaborated on the issue of substandard powder and, in the end, for some reason higher humidity under which it was stored which had a disastrous effect on Russian guns? Why Stessel literally sold Port-Arthur to Japanese and instead of being shot as a traitor was pardoned by Nicholas II? Nah, details, tactics, operational art, strategy, industries—it is all for losers. Yet, if even the Western World was shocked, in Russia, outcome of Tsushima and of the whole war created a state of utter national agony. NO lessons have been learned since Crimea and even formal "liberation" of serfs, in reality did little to improve (in many cases it made it even more difficult), didn't help much in Russia's quest to stay a premier power of the age. So, enter first Russian Revolution of 1905-1907. Catastrophic national humiliation in Russo-Japanese War was one of the major factors, in fact—a match which lit already heating up powder keg of Russia's problems. Word Tsushima entered Russian consciousness and culture, till this day, as a euphemism for catastrophe Were Jews involved in this Revolution? Yes, they were, but they were just one "problem". The most important one, which also allowed many competent Russian historians (such as Elena Prudnikova, among others) call this Revolution a first Peasant Revolution of Russia, was, in the words of a very prominent, fervently anti-Bolshevik, Russian politician, Pavel Milyukov a failure of "emancipation", courtesy of Russian, oh, so admired, landowners class, which made famine a normal state of Russia:


“The insufficiency of food is thus … associated with an abundance of working power. To find additional food and to spend additional work in producing it, two methods are possible: either to increase the productivity of the given plot, or to increase the plot itself. But the productivity of the soil cannot be increased without new investment of capital, if even we admit, what many writers do not grant, that such increase is possible at all on lands in communal ownership and in precarious possession of the single cultivator. Now the peasant in distress does not possess any capital, and rural credit for improving land does not exist in Russia. The other, and, under existing conditions, the only possible, method, is to buy or rent additional plots of land. This has always been the most ardent desire of the peasants, and a real struggle for buying or renting land has been going on during the whole period under consideration. Owing to the large number of estates of nobles offered for sale, and also to the material help of the Peasants' Bank (since 1883), the agriculturists have succeeded in increasing the property of the peasant communes since 1875 by 10 per cent. But even though we add such land as has been purchased by individual peasants, independently of the communal allotments, which would increase the amount by another 13 per cent., this general increase of 23 per cent does not prove equal to the increase of the peasant population during the same period, which was 48 per cent, or more than double. As a result, the holdings have constantly decreased and it became necessary to rent neighboring land. This necessity has been so great, and opportunities for renting land have been so comparatively few, that rent has risen enormously. Contrary to the laws of classical economy, the rent has not only reached the amount of the "unearned increment," but has far exceeded it, swallowing up the profits and, very often, the very wages of the tenants. Such exorbitant rent may be compared to what is known to have been the case in Ireland before the great famine of 1846-47, when the competition among the tenants "reminded one of a struggle for food in a besieged city or on a ship in open sea." The same kind of competition is going on among the Russian peasants owing to the absolute insufficiency of their plots for mere subsistence. Of course, no profits are looked for from such renting, the only aim of the peasants--and the only economic explanation of the possibility of such a rent--being to apply their own and their horses' gratuitous labor to produce some more grain for their sustenance. Otherwise this possibility of subsidiary work would be lost, and both man and horse must starve. No wonder that they count their work as nothing.”


What is interesting in all that is the fact that still by 1905 a dominant Russian way of agriculture was a Three-Field System—a medieval way of growing food stuff, especially in the age of serious mechanization unfolding in the West. So, it matters really that Russia was not just humiliated militarily and politically in 1905. It matters that she was humiliated while being illiterate and constantly hungry, with wholesale and local famines being a permanent occurrence in Russian countryside. In the end, overwhelming majority of Russian Army and Navy recruits tasted the meat for the first time in their life on the military service. As Nikolai Nekrasov wrote in his 1864 "Grandfather Frost the Red Nose" (in Russian), Part: Death of a Peasant:

I am not in the position to translate one of the greatest Russian poets but highlighted reads:


The Dears sat for the dinner—cabbage, bread and kvas.

But never mind, those were "enemies" of Russia, who "lied" about the state Russian people were forced into by all those magnificent Russian nobles who knew from the get go that it was "Jewish conspiracy" to expose Russia's peasantry calorie intake and then try to stop never-ending Russian hunger. Other than that, life in St. Petersburg or in vast landowners' mansions in country side was swell and champagne was flowing, under the sound of a crunch of French baguette…