It Begins To Sink In, Finally, But Too Late.

Russian oil exporters are pressuring Western commodity traders to pay for Russian crude in euros and not dollars as Washington prepares more sanctions for the 2014 annexation of Crimea by Moscow, Reuters reported last week, citing as many as seven industry sources. While it may have come as a surprise to the traders, who, Reuters said, were not too happy about it, the Russian companies’ move was to be expected as the Trump administration pursues a foreign policy where sanctions feature prominently. This approach, however, could undermine the dominance of the U.S. dollar as the global oil trade currency.

This situation, which passes as a surprise in the US only, augments well Ron Unz' yesterday's excellent summary of Trump Presidency.

However, although Trump had reached the presidency by advocating a radical populist-nationalist agenda, he has hardly governed in those terms. For his first two years in office, he sunk nearly all his political capital into enacting huge tax cuts for the rich, wholesale Wall Street deregulation, large increases in military spending, and an extremely pro-Israel foreign policy—exactly the sort of policies near-and-dear to the establishment conservative candidates whom he had crushed in the Republican primaries. Meanwhile, his jilted grassroots supporters have had to settle for some radical rhetoric and a regular barrage of outrageous Tweets rather than anything more substantive. With Republicans in full control of Congress, finding excuses for this widespread betrayal was quite difficult, but now that the Democrats have taken the House, Trump’s apologists can more easily shift the blame over to them.

Difficult to argue, because in terms of what really matters, that is tangible economic results, Trump has very little realistically to show for it. As Ron Unz continues:

For foreign policy reasons, I had strongly favored Trump both in the primary and in the general election, but I hardly regarded him as a thoughtful vessel for the positions he claimed to espouse. To put it bluntly, he struck me much like a highly-opinionated construction worker, angrily spouting off on politics in his local neighborhood bar, being right on some matters and wrong on others, but with none of his views based upon any deep understanding of the issues. I suspect that even many of Trump’s strongest supporters have gradually come around to a similar appraisal of their idol.

So did I, but hopes were dashed really fast and as Fred Reed in a moment of utter sheer brilliance observed about Trump he was First Transgender President, Trump Became Hillary. Trump simultaneously became also W and in terms of foreign policy, which in reality matters for the United States way more than it is traditionally credited with, Trump became a neocon in a sense of fanatically following an aggressive dogma and "weaponizing" US economy. So, the world learned fast that the economic war was declared on it and it started acting or, rather, counter-acting and most important strategic move was, inevitably, to slay a holy cow of America's economic "development" (or otherwise) of the last 70 years or so--the US Dollar.

This is what Trump and people on the American "top" do not recognize, while the US still remains an economic powerhouse:

1. American Deindustrializtion hasn't been stopped while Reindustrialization requires a volume of the investment (money) which simply cannot be printed anymore nor could US treasuries be viewed anymore as a trusted instrument, because...

2. A main pillar of these treasuries--the US military power and ability to control the empire, apart from being grossly inflated to start with, diminished greatly in the last 20+ years and continue to decline because...

3. The actual size of the US economy is much smaller than those proverbial $22 trillion and China outproduces the United States by a great margin in many critical fields and catching up in others. As an example, one of many, the US commercial shipbuilding doesn't even register (0.35% of global tonnage) in this industry, never mind nauseating mantras about US being "largest economy" in the world--it is not, China is. One can review Chinese commercial shipbuilding here, or can review who is a real mover (a hint--they are a gas station) for satellite-constellations in space.

4. Removing, or bypassing, US Dollar as the only global reserve currency--the process which is ongoing and accelerating as I type this--inevitably will cut the US economy "to size" and will accelerate the process of "landing" greatly, hopefully not crash-landing which may force desperate US "elites" unleash a global conflict.

Trump's trade wars are a good indicator of desperation and these wars only accelerate dedollarization and there is nothing the US can do about it short of unleashing a global military conflict, as I said earlier. Some people in D.C. think about it. Iran's SWIFT snafu is just the latest in a row of the geopolitical and economic prescriptions which do not work and, in reality, harm the United States itself. Well, Trump is correct in one thing for sure--if not for the United States China would have never become what she is today and for that, as the saying goes, United States has only itself to blame. In the end, if not for the way the US treated Russia in 1990s there would have been no fundamental rethinking of Russia's foreign and defense policies. But here we are. Trump merely, rephrasing Clausewitz, continues American aggression by other (economic) means and we are in the brave new world where nobody takes American words and promises seriously anymore. In related news, last week:

ZHUHAI, China (Reuters) - China and Russia on Tuesday unveiled a life-size model of a proposed wide-body long-haul jet at the opening of China’s largest airshow, giving public shape to their joint efforts to break into a market dominated by Boeing and Airbus. 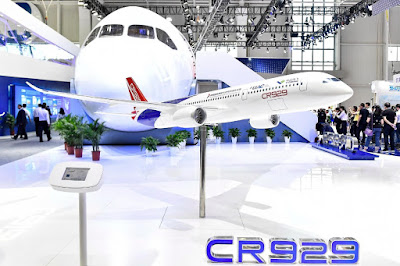 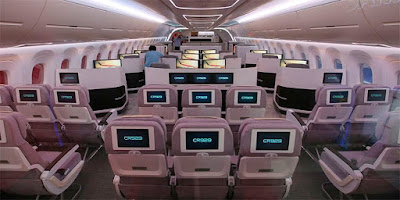