This post or, rather, a series of posts was long in the making since required a significant thinking and re-thinking (and recalling) of many details of WW II and Western Allies approach to that war, and, I think, it is as good time as any to start writing about Dwight D. Eisenhower and his role both in WW II and, as a consequence, in what followed until his famous farewell speech on 17 January 1961 from the White House. I stated not for once, that we all still live in the world which was largely formed in the crucible of battles of WW II and it seems it is a good idea to revisit some very important (and crucial) events of that war. So here is a short intro:


It is  rather an arduous task to discuss WW II, namely European Theater of Operations, with many Americans who, as strange as it sounds, are more or less acquainted with the peculiarities of Allied operations after D-Day. The reason for this difficulty is simple--it is normal to be patriotic and have many biases associated with such a position. The amount of books in the US dedicated to European Theater is immense, so is the number of different TV shows and, of course, there is always Hollywood which is hugely responsible for developing of those American biases when dealing with WW II. Yet, it is, very often, precisely this gigantic number of "studies", narratives, stories and reflections on Allied operation in Europe which creates a problem--for an average American it simply becomes impossible to dig for the truth, especially for the one which requires at least basic understanding of issues of military strategy, operational art and, to a certain degree, tactics. Moreover, understanding of how those three interact and how they relate to a larger military-political picture is even more difficult task, since requires a good grasp on realities of a war, and especially the war as complex and brutal as WW II. Hence, Hollywood and pop-history.

My personal experiences with these uniquely American attitudes and biases throughout the years ranged from being overwhelmed by militant ignorance on anything WW II related to me, a former Soviet military professional, explaining actual facts of US Army military planning and operations to a number of people who would pass, under normal conditions, for people "well-versed" in US WW II military history. The case in point is me, not for once, being forced, with quotes and even scans of documents, to debate many American WW II history buffs that Operation Cobra was a result of Omar Bradley's idea and planning and that General George Patton was merely an attribute to this operation. But it is almost impossible to break through American Patton's myth, which was enhanced immensely by the famous movie with George C. Scott's genius (and detached from actual war reality) performance, which won him an Oscar. As Ladislas Farago noted in his book, when the movie came out in West Germany early 1970s, Germans couldn't understand how" an obscured American general merited a movie", when there was not one made about Zhukov, Montgomery or even Rommel. But that is what constitutes the main problem--a Hollywood version of WW II and of Allied operations in Europe. Idealized view of the WW II, as merely a combination of artsy maneuvers conducted by military leaders who were modern reincarnations of Napoleon and who were ready to "breakthrough", "pursue", "envelop" or "annihilate", continues to persist in the US. Patton, who was just another Army Commander, and by far not the most remarkable one, among very many generals of anti-Hitler Coalition, merited two major Hollywood motion pictures, while Allied Supreme Commander Dwight D. Eisenhower got himself a 1979 TV mini-series and a rather obscured, yet again TV, 2004 movie with Tom Selleck as Ike--hardly an appropriate tribute to a man, who not only was a huge part in American push, together with incomparable George Marshall, for the Second Front but effectively stopped the war in Korea and went on to become a truly great American President, especially viewed from today's vantage point, against the background of a number of mediocrities who since occupied the White House. In US WWII mythology Ike was and is hardly a persona who fits into American perception of the war, which is not surprising--most Americans simply have no grasp of realities of the warfare in general and of WW II in particular and that is a travesty.

While Hollywood portrayed Patton as a hand gun whipping, fearless "leader" ready to literally lead his Third Army to, well, even Moscow, Ike's balanced, no-nonsense approach to the realities of his high command, while being militarily admirable, made not a very good material for Hollywood. Yet, both Eisenhower and Patton represent an inherent and, probably, irresolvable contradiction of contemporary American military history, since are counter positioned a strategic and operational reality and a myth, and this brings to the fore the issue of scales and proportions, which is crucial when dealing with WW II. The question is then this: was Ike a great general?

Here is the catch: real military leadership under conditions of WW II had absolutely nothing to do with the qualities exhibited (and greatly embellished later by his propagandists) by Patton. As studies of his campaigns, especially his debacle at Lorraine, pointed out (such as review by Dr. Christopher Gabel for Combat Studies Institute at US Army Command And General Staff College at Leavenworth, KS) Patton's exploits were "ruthless and reckless". The question is, then, why reckless. It will be answered later. To understand this issue one has to look at the realities of the Western Front's South by Fall of 1944. Realities were such that the Third Army faced "Few of the Germans defending Lorraine could be considered First-rate troops. Third Army encountered whole battalions made up of deaf men, others of cooks, and  others consisting entirely of soldiers with stomach ulcers. The G2 also identified a new series of German formations designated voIksrenadier divisions). These hastily constituted divisions numbered only 10,000." It is hardly a force to be compared to Wehrmacht circa 1941-43 but that is mainly the force on fighting which Patton's mythology is built in the US and the one which obscures serious strategic and operational choices Ike was facing since he, unlike Patton, had two large Army Groups under his direct command and was the one, who, among very few others, was responsible for finally turning Overlord into the actual operation--a command and leadership level of which Patton could only dream about and for which he was ultimately unqualified. But, if one discounts Patton's mythology, which is strictly a local American phenomenon and the one which complicates and, in fact, impedes understanding of WW II dynamics, was Ike, in the end, a good military leader? The answer to this question can be found in identifying qualities which realistically were required for the prosecution of such a war as WW II was. It is immediately possible to say that Ike was qualified to do so and the only debate which is possible here is the one of a style not of a substance of what Ike was doing, especially once one begins to go back to 1941-42 and see how Eisenhower, then assuming the position of the head of Marshall's OPD, viewed European Theater and that will require an excurse into the Sledgehammer ideas. It all comes down to this: 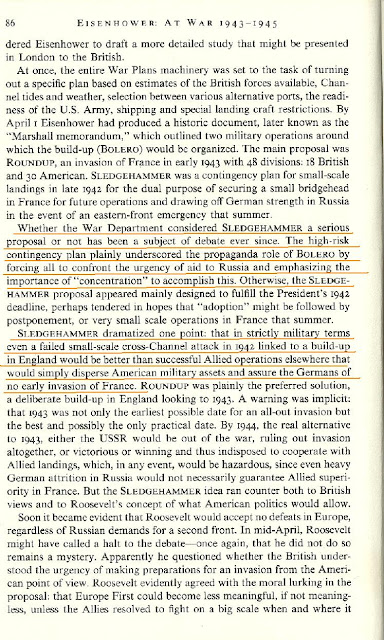