Nothing is new under the sun. Installing weapons on merchant ship is as old as navigation itself. 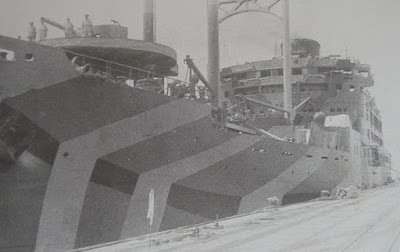 While history does not repeat itself, it certainly rhymes. I hate cliches, but this one works, sort of. Enter Israel's testing its LORA weapon system (basically land-attack missile) from the commercial vessel.

or this and behold the immense power of a standard commercial container. Are we back in the time of commercial raiding? We very well could be. Indeed, the only thing you need in case of 3M54 stored in a regular container is a targeting data, which can be obtained either with own means (radar) or through outside "providers"--they give you either bearing and range or current coordinates. You can even add these rather attractive girls in assisting you with target acquisition  and entering the "flight plan".

But on a more serious note, proliferation of the container-based anti-shipping missiles, not to speak of land-attack ones with the launch ranges in excess of 2000 kilometers, may throw this whole littoral and A2/AD business completely off the rails. The whole notion of some of yours everyday, prosaic, run of the mill, merchant container ship, such as this:

being able to launch 4-8-12 or even 16 cruise missiles when is called upon--this is a scary thought. Suddenly, both high seas but especially littorals become a very dangerous place. At the dawn of a nuclear weapons and ballistic missiles US Navy dabbled with an idea to place SLBMs on one of its cruisers--the idea which never was realized--you can find info on that if you are interested. Today game changed completely. Virtually anything, in terms of strike weapon systems, can be placed on practically any commercial vessel thus transforming it to a modern day raider. Considering modern advancements in navigation and radio-communications, building the network of strike platforms suddenly doesn't seem that difficult, especially when one has a decent size commercial fleet. Scary. But even scarier is a proposition of getting a salvo of land-attack missiles from thousands kilometers away--go find who did it. In the end, innocent looking commercial vessel can always blame it on some lonely Russian Oscar-II sub which did the nasty from the same area where this vessel was peacefully navigating for a commercial purposes. Thus, the number of variables grows exponentially and military intelligence agencies will have their hands full trying to figure out which vessel and in what capacity is sailing God knows where during this proverbial threatening period.

At this stage, this problem hasn't been studied in depth it requires. There is no doubt that with further proliferation and improvement of the cruise missiles' technology, merchant fleet suddenly becomes not only a serious logistical consideration, it becomes a serious combat factor. Any ship capable of carrying containers potentially becomes a battery of deadly missiles, whose salvo may alter the best naval operational plans or even have a direct strategic impact by wrecking a havoc on Shipping Lanes Of Communications. Having 3M54 it is not that difficult to do and it will be done (hopefully not) should the opportunity present itself.
Posted by smoothiex12 at 11:20 AM