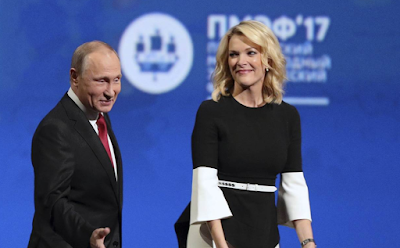 And now, the whole world holds its breath in anticipation of what message and meaning Kelly's dress will have when she interviews on Sunday good ole' Volodya on the most important issues facing the world. The whole "analytical" piece on Yahoo News was dedicated to this. Quoting from this serious and, what is most important, timely analysis (2 000 + comments, no less)

...while out and about promoting her book, Settle for More (the cover of which features her in a sleeveless dress), and attending other typical celebrity events, she has given us so many different views of her sculpted deltoids. She even told the Times that she wore that dress again, saying, “I felt very strongly, I was not going to be defined by what someone else deemed appropriate.”

Man, talk about serious issues. In the end, the author tells us, that without fashion intelligence (FBI? Fashion Bureau Of Investigations) and analytic organizations such as NSA (National Shopping Agency) we, oh, the horror! will face this:

Then again, this blue dress is her evening attire for a state dinner and photo op with Putin and India’s Prime Minister Narendra Modi, who are both speaking at the economic forum’s plenary session, where Kelly is the moderator. But if she chose to keep it on for her interview on Friday, well, in her words, it’s on us to get our heads around it.


I don't know how to live now, since I will not be able to get my head around it since I am simply unqualified to interpret messages and meanings of Megyn Kelly's dresses and other attires. This horrible situation may call for a new academic field of attire interpretive science, which goes really well with such fields as political "science" and journalism. Meanwhile, I would suggest Kelly, who is a known expert on Russian hacking and other national security issues to come to Putin's interview completely... naked. That will show them, those deplorables, and Putin what real freedom looks like. You know, freedom from decency, professional integrity, honesty and other obsolete, old fashion values. Coming naked to this interview will finally leave nothing to imagination and may actually show what a giant self-serving cun. ... I mean, fearless journalist Kelly is. In the end, she is "not going to be defined by what someone else deemed appropriate". Real facts and issues be damned.
Posted by smoothiex12 at 12:21 PM