1. Publication of IMD 2017 World  Competitiveness Ranking;
2. Qatar being thrown under the bus by his Arab neighbors led by the ever anti-terrorism and human rights vigilant Saudi Arabia.

Frankly, I will enjoy the show of two terrorists states, of KSA and Qatar, spitting at each other--both richly deserved to be declared terrorists states and be put under severe international sanctions. But since this is not going to happen, the next best thing is to observe two medieval, albeit rich, satrapies going at it. But while anticipating those two shitholes trying to outdo each-other in terrorism accusations (it is, actually, funny), the pp.1 is more important.

This Swiss, supposedly very authoritative and internationally renown, business-school's "competitiveness" rating should be something really-really solid, very "scientific" and very revealing. Well, guess what, it is not. It is the same contrived crap which has no relation with reality and here is why:

Qatar today rushed into supermarkets to grab whatever food is available since, in accordance to this Swiss outlet (which prides itself on being a NASA of competitiveness rankings), Qatar in 2017 ranks higher than: 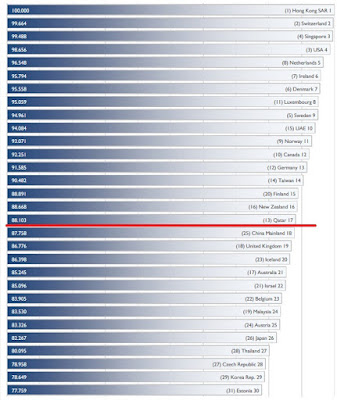 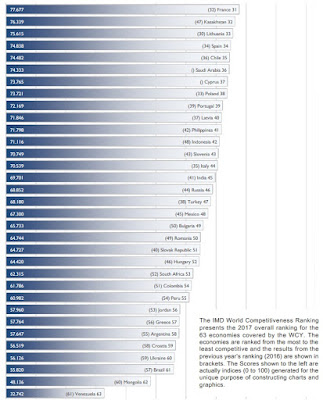 Let's list which nations Qatar, which produces nothing, "leads" and, in accordance to numerous sources:

In 2012, Qatar was ranked third from the bottom of the 65 OECD countries participating in the PISA test of maths, reading and skills for 15- and 16-year-olds, comparable to Colombia or Albania, despite having the highest per capita income in the world

So, those nations are: China, Australia, Republic Of Korea, Japan, Austria, Russia (but then again, Saudi Arabia and Lithuania are higher than Russia), just to name a few. Get it, boys and girls? In modern Western "economics" the fact that one builds space stations, leads the world in education, builds best cars in the world, builds best airplanes, best weapon systems, produces best engineers and scientists--all that doesn't matter. Even the food rush in Qatari stores will not prove to those Swiss morons who came up with this POS "rankings" that truly competitive economies do not rush food stores unless directly attacked. They do not do this for a simple reason--because they are self-sufficient and are able to feed themselves, apart from doing other serious things. But for IDM it really is not an argument. Apart from Qatar, as well as most ME satrapies, being, using good ole' John McCain's parlance, merely gas stations camouflaging as countries, IDM, it seems, doesn't mind looking like a bunch of imbeciles who are ready to come up with any nonsense as long as it pays for pseudo-academic sinecures.

As Correlli Barnett wrote 40+ years ago:

"As Adam Smith, the founder of liberal economics, put in 1776:"By pursuing his own interest (an individual) frequently promotes that of society the more effectually than when he really intends to promote it." It was Adam Smith who formulated the doctrine of Free Trade, the keystone of liberalism, which was to exercise a long-lived and as baneful effect on British power as Wesley and Whitefield's preaching. Adam Smith attacked the traditional "mercantilist" belief that a nation should be generally self-supporting.... According to liberal thinking, a nation was no more than so many human atoms who happened to live under the same set of laws.."

And while a diplomatic crisis between Qatar and other Arab states is important and may have some bearing on prices of oil and gas, it is Western economic "science" which is an unmitigated disaster and which, to a large degree, is responsible for unending economic crisis which engulfed Europe and the United States. It is not surprising then that we are where we are in the world where virtual money buy virtual services and "products" without benefiting overwhelming majority of people, because they are... virtual, unreal. The same world in which Qatar is more competitive than Japan or Russia, and where Saudi Arabia fights Islamic terrorism. So, who is bigger fool then, semi-literate medieval terrorist states which produce nothing but oil and gas, and even then--thanks to Western science and technology, or people who try to use pseudo-science to convince others that black is white? In the end, I can come up with a very well justified ranking of academic fraud and this one will be way more precise than any "competitiveness" trash IMD provides. In fact, in this academic fraud ranking, IMD will be very close to the top, together with Qatar's only top competitive position--in terrorism sponsoring ranking. No statistics is needed for that.
Posted by smoothiex12 at 1:01 PM