Ralph Peters Is At It Again.

If there is an embodiment of what is wrong with Russia "scholarship" in US military-intelligence circles, no better candidate for this role exists than "Fox News strategic analyst", a retired Lt.Colonel Ralph Peters . The guy passes in the US for some kind of "scholar" on Russia since served for some time in some military intelligence outfit in Germany during 1980s with specialization in Soviet "whatever". After US F-18 shooting down of Syrian SU-22 inside Syria and Russia breaking off de-confliction channel with US forces in the area, Peters gave birth to a "pearl" of a "strategic" thought, which, if it wouldn't be so hysterically warmongering  (considering the "level" of US military "strategists" in media), it would have been totally hilarious. In his piece titled "The Stakes In Syria Now Include US-Russia War", Peters is confused so much that he misses the point that US, unlike Russia forces, are invaders and aggressors in Syria and most US "allies" there are Islamic jihad terrorists. In the end, even US allying itself with Kurds is nothing more than US trying to partition Syria and do, not in a small part, Israel's bidding. This doesn't prevent him, however, from coming up with a hilarious stratagem:

Were we to accept Russia’s ultimatum, we could not support our allies and we’d be shut out of the endgame battle with ISIS when, as Raqqa falls, the terrorists make a last stand at Deir ez-Zor (a city with a grim history: It was the end-station for Armenian genocide victims death-marched across the desert).

If Peters is not in the loop yet, he probably should update himself on some basic facts of who US "allies" in the region are. He may recall that among those "allies" are Saudi Arabia (and Qatar) who are main financiers of this very ISIS, which US supposedly fights, and other jihadist elements. In fact, US history of supporting Islamic jihad is stellar, including events in Syria. If Peters wants to get updated on this, he may try Senator John McCain--he will "educate" Peters on US "allies" in Syria. But then, in a proud tradition of "stolen valor" Peters, known mostly for his fictional military literature, drops a bombshell:

In reality, Bashar al-Assad and his backers cynically dumped the burden of wrecking ISIS on us and our local allies to concentrate on slaughtering civilians, exterminating freedom fighters and torturing thousands of prisoners to death. Now that we’ve done the anti-ISIS heavy lifting, they want to exclude us from the endgame and crush our Kurdish and Arab allies.

Ahem, don't we know that these were the United States that defeated Wehrmacht? You know, with a small help from those Russkies? Well, now, as Peters states, it is the US who did "heavy lifting". Gee golly, the history repeats itself: 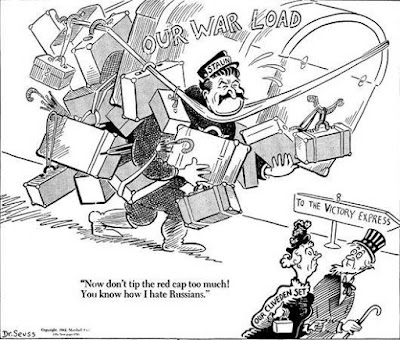 But history is of no importance to Peters, he comes up with another  pearl:

What’s wryly striking is that the Russians, who see themselves as master strategists, are blind to the way Iran has been manipulating them: Iran got us to fight ISIS and may get Putin to fight us. Guess who wins, either way?

And why Russians shouldn't see themselves as "master strategists"? If Peters didn't know, he also should update himself on the list of Russian military victories--it is damn impressive. In fact, come to think about it, from Teutonic Knights in 1242 to Napoleon, to the gates of Berlin, to nearing the end-game in Syria--not too shabby, I say, and without rivals. And that is where the secret of Peters' Russophobic hatefest lies:

What happens now? Our military is war-gaming contingencies to ensure that, should the Russians fire on us, we’ll be prepared. We cannot let the Russians dictate where we fly and who we can protect. We’ve gone out of our way to avoid confrontations with Putin’s war criminals, but there’s a limit. And we may be about to reach it.

Yep, surely Russians are "war criminals", they are also genetically inferior to people like Peters or Clapper, so, yes, light colonel, I can sense how your feelings are hurt. But the reason Russia can "dictate" is very simple, Russia doesn't fight wars in media, she does it on the ground and does achieve tangible military results (objectives), which lead to winning wars, that is achieving political objectives--the quality US "military strategists" somehow do not possess as recent history of US wars demonstrates so vividly. But I am sure, Peters knows this, after all, he is Fox News "strategist".

But to top it all off, Peters comes up with this sheer lie:


Russia’s officer corps appears to be itching for a bout for the world championship, convinced we don’t have the guts to stand up to them.

No, Mr. Peters, you know shit about Russian military history and  the same goes to Russian military culture which is overwhelmingly built around defense of historic Russia, which, unlike US blessed with geography, fought off for a millennium all kinds of invaders. As Colonel Lang wrote yesterday in his blog:

There is a pernicious fever of Russophobia that is now wide spread among active and retired officers of the US armed forces.    Many officers, however intelligent and well educated are extremely rigid in their thinking.  This is a professional defect that was rewarded in the long process of competitive service leading to promotion.  It was thought to indicate reliability and firmness of character.  The Army's Russian studies graduate school at Germisch, Germany has, IMO, contributed to this Russophobia by inculcating an attitude of implacable hostility toward the USSR and now Russia.  The officer graduates of that institution have imparted this attitude to many others in the US Army.  Retired US Army officers are now heard on Foxnews saying that the Russians must be "pushed into submission."  This is crazy.  Russia is not a minor power.


Yes, Ralph Peters (and the kinds of people Colonel Lang writes about)  wet dream is to fight Russians. This desire has no rational impetus behind it:


This could spin out of control very, very fast. If it does, we have to win rapidly and decisively — and keep it within Syria.

Here Ralph Peters demonstrates a popular view among US military brass and it is irrational despite having a very rational explanation. The United States is an exceptional country in many positive respects, where it is absolutely is not exceptional is in winning wars against peers. Bar a magnificent performance by US Navy in WW II in Pacific, all US military victories were only within coalitions and even then with US joining the fight when the issue was settled. Apart from turkey shoot of incompetent Saddam's force during the First Gulf War, starting from Korea, US didn't win a single war. This can not stand, in view of many US exceptionalists, since US, as an exceptional nation, must be exceptional militarily. To be such, one has to have a record to back it up. US doesn't have such a record, despite an incessant propaganda of US Armed Forces being finest, the best there ever was etc. When one is being bombarded daily with such ignorant claims:


Many Americans look back proudly on the moments in the middle and latter half of the 20th century when the U.S. military provided the crucial margin of victory over Nazi Germany, Imperial Japan, and the Soviet Union.

It is not surprising that one gets to be brainwashed into complete ignorance on the fact that by D-Day Nazi Germany was merely counting last months before being utterly destroyed, Allied landing notwithstanding. How US military provided "margin" in defeat of the Soviet Union without ever encountering its Armed Forces on the battlefield is also beyond comprehension, but no worry--it is all perception management. What cannot be managed, however, is the fact that to realize oneself as an exceptional military power, one needs to fight and win the best. The only real "best", the only power which US cannot claim propaganda, forget real combat, victory over is Russia. Russian military history and tradition dwarfs that of the US and that is what doesn't allow people like Peters to sleep calmly at night. They need to realize themselves through fighting what is towering over them, still unconquered and the only power capable of defeating US conventionally, not to speak about being able of turning US into radioactive wasteland. What's left? Yes, Syria and a limited military Russian contingent there--this is the only chance for the US today to defeat anything Russian and then claim the victory. Ralph Peters is representative of such school of thought. His lies, hysterical Russophobia and downright "stealing of valor" attempts, not to mention, a bizarre view on strategy are, sadly, what very many in top US military-political brass profess.

Apart from losing any human decency, let alone professional honor (was it ever there?), in calling for killing Russians, or naming them a genetically inferior creatures, or calling them war criminals--when US hands are covered in blood of hundreds of thousands of innocents--this all represents a complete and dangerous departure from any appropriate conduct of civilized and cultured people. But then again, it was my contention even before I started this blog that  American Republic, or rather what's left of it, is in grave danger and is under assault by people who, due to their narrow-mindedness, corruption and ignorance, are the ones who bring the world to the brink of catastrophe. Ralph Peters is a herald of such a catastrophe since uses throwing tantrums instead of understanding what real strategy is.