Western "economists" and "analysts" are a very interesting breed--they carry worthless pieces of paper called degrees in "economics" from universities where people who never worked a day in life on real job teach them how real economy works, and they love hyperbole. Like this:

The ruble sank early Monday as Russia allowed so-called "friendly" countries to re-enter Moscow's bond market. Moscow's fiat currency fell as much as 1.5% to 61 against the US dollar, while also pulling back roughly 0.2% against the euro. The Kremlin announced plans last week for investors haling from countries that haven't taken part in sanctions against Russia to trade in debt securities. Russia will also convert global depository receipts, or GDR's, into shares to be traded on the Moscow Exchange. Russia's central bank said on Monday that it planned to write off the GDR's from account holders and then credit the shares. Moscow closed off its markets in February to keep a tighter seal on outflows of capital, after President Vladimir Putin launched the invasion of Ukraine. And the ruble's latest fall adds to the wild swings the currency has seen after notching all-time highs and record lows this year.

As you all know I don't deal with this voodoo which Western economics is because I don't deal in magic, occult and magic spells, aka Wall Street. But as always, for anyone who wants to glimpse at economic reality of the world it is worth noting that Ruble was revolving around 60-61 (Hey, Joe, where is those promised 200 for a dollar) for a duration of the last week or so and today it closed at: 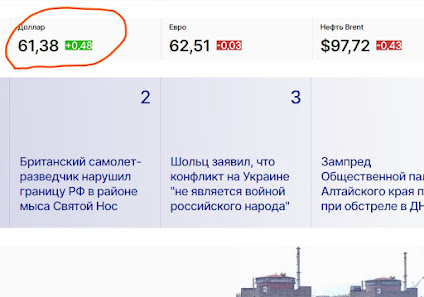 Of course, the piece above reports in a proforma manner this piece of news:

NEW YORK, Aug 15 (Reuters) - Several major Wall Street banks have begun offering to facilitate trades in Russian debt in recent days, according to bank documents seen by Reuters, giving investors another chance to dispose of assets widely seen in the West as toxic. Most U.S. and European banks had pulled back from the market in June after the Treasury Department banned U.S. investors from purchasing any Russian security as part of economic sanctions to punish Moscow for invading Ukraine, according to an investor who holds Russian securities and two banking sources.

Allegedly it is all about divestment and ridding off the "toxic" Russian assets. Sure. But something tells me that there is a lot more to this story than Reuters puts on, and the issue here is very simple: in the long run real economy on which the financial system rests, not the stock market, wins. And while I am no specialist in securities--I am simply not that interested in speculation in general--I give you one example to illustrate the issue.

Japan has revealed it will keep hold of its stake in the Sakhalin-1 oil and gas project in Russia, despite Western energy giants abandoning projects in the country. Industry minister Koichi Hagiuda argued the project was key to diversifying Japan’s energy supply. He said: “Sakhalin-1 is a valuable non-Middle East source for Japan, which depends on the Middle East for 90 per cent of its crude oil imports. There is no change in maintaining the interests of Japanese companies in it.” Sakhalin Oil and Gas Development, a Japanese consortium, owns 30 per cent of Sakhalin-1. Russia has banned investors from so-called unfriendly countries from selling shares in banks and key energy projects, including Sakhalin-1, until the end of the year. This is despite firms such as Shell and BP unilaterally ditching stakes in projects situated in the country following the invasion of Ukraine.

You try to kick them out, but no--they just don't want to. You see, when one's life is dependent on real, tangible things, not some funny papers--sanctions or not--try to kick them out. And mind you, Russia is imposing her own sanctions on the "unfriendly" countries. But, getting back to Ruble, it is absolutely not a secret that Russia since June went public stressing that:

And that Russia is now in the process of "weakening" the Ruble and tries to find a "golden middle" which will be both good for revenues and budget. The discussion is on now about what is this rate comfortable for Russian economy. Some say it is 65, others go as high as 70. But under no condition all those changes are "sinking" as some try to portray a normal work of the government, which is in a full control of national economy and works with it as a unified organism, unlike it is the case in Western world where suicidal economic and ideological concepts got a stronghold on the West's future which is bleak. But then again, what do you expect from people who cannot find the definition of recession. I am on record, most of those people cannot find their own ass with their own two hands in a brightly lit room, so it is all good. Somebody, tell me where can I buy Tesla or Apple stock, I need to make a good investment before electricity rationing and food shortages start, wink, wink...

P.S. Something tells me that there are many people in D.C. who would love to lift many more additional sanctions from Russia while making sure that EU imposes new ones. Just a wild thought. But what do I know.