Tallinn and Helsinki have discussed integration of coastal missile batteries that would enable the two NATO members to blockade the Russian Navy in the Gulf of Finland, Estonia’s defense minister announced on Friday. This would turn the Baltic Sea into a “NATO internal sea,” the official said, echoing comments made earlier by Polish and Lithuanian leaders. “We need to integrate our coastal defenses. The flight range of Estonian and Finnish missiles is greater than the width of the Gulf of Finland,” Estonian Defense Minister Hanno Pevkur told the Finnish newspaper Iltalehti. Finland’s MTO85M coastal missiles have a range of over 100 kilometers. The Gulf is about 82 kilometers across from Helsinki to Tallinn. Estonia plans to buy Israeli Blue Spear missiles later this year, which have a range of almost 300 kilometers.

These statements are not surprising for people who went through NATO military "education" and who do not understand that the war is the most democratic procedure and that the enemy has a say too. The enemy being Russia, of course. We should start immediately with the fact of Pevkur being a lawyer, but also with this: 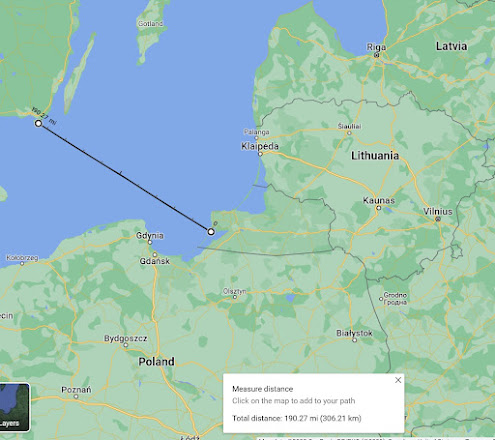 This is the range as measured from Russian Baltic Fleet's main base in Baltiysk (Kaliningrad Oblast), while this is from Kronstadt: 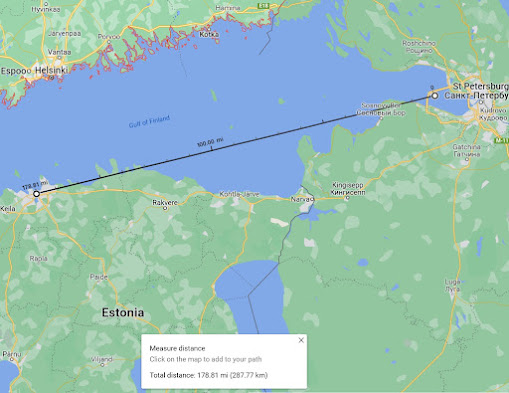 As you can see yourself, modern ships of Baltic Fleet can hit any surface target not only in areas presented but ANYWHERE in the Baltic Sea, even without leaving their piers, because the ranges of modern Russian anti-shipping missiles are all well above 550 kilometers and if Estonia or Finland want to attack Baltiysk or Kronstadt--good luck, because it is well known fact that the best air defense in the world are friendly tanks at the enemy's airfields and missile positions. But let Estonia and Finland feel, even if for a short while important, especially after deploying what amounts to good ol' Israeli Gabriel missile, now in its fifth iteration with all kinds of bells and whistles as seeker. It is still a subsonic missile, however.

So, if Estonia wishes to experience something like this, which is a Solntsepyok delivery:

Among many other things, why don't Estonia try and see what happens. After all, this is what their owners in D.C. want. Nah, I am screwing with you. In related news:

Soldiers from a U.S. air assault division that arrived in Europe in late July are being sent to NATO members in eastern Europe to help protect the military alliance's eastern flank, the U.S. Mission to NATO announced Thursday, as Russia fuels concerns that its war could widen beyond Ukraine. The mission said that nearly 2,400 soldiers would be sent to NATO members Romania, Bulgaria, Hungary and Slovakia to "reassure our Allies, and deter our adversaries."

Kremlin is in panic, wink, wink. Meanwhile Peskov stated (in Russian) that plant in Ukraine for producing TB-2 Bayraktar UAVs, if completed will be demilitarized. As you may have guessed it, it could be demilitarized from any direction and from any distance. The fact Estonian Defense Minister evidently cannot grasp.