For any observer nowadays it is enough to take a look at the front page of Oilprice.com, popular but definitely globalist in character, resource to make a conclusion that the game is nearing its end and something altogether unknown is ahead of us. Just take a look at these headlines from today, August 29, 2022. 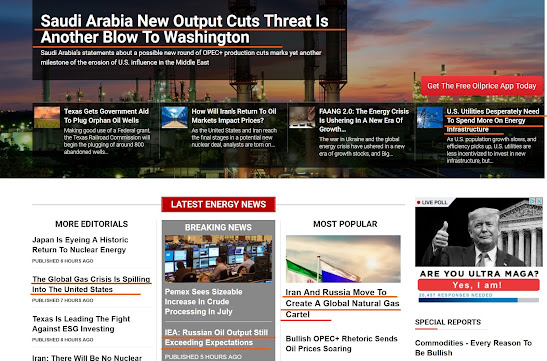 I underlined in red the headlines, among many other ones, which not just testify but scream at you about the ongoing and very visible collapse of Pax Americana and about the world moving away from the West-dominated and centric world.

People ask me all the time to write on this or that matter, primarily military ones, and I understand them. How can one miss that news:

Britain’s biggest ship and the second of the Royal Navy’s two aircraft carriers, HMS Prince of Wales, has broken down shortly after embarking on a cross-Atlantic aviation trial. The carrier “remains in the South Coast Exercise Area while conducting investigations into an emerging mechanical issue,” the Royal Navy’s spokesperson said in a statement to the media on Sunday. The incident occurred just one day after the vessel left Portsmouth for what the Royal Navy described as “a landmark mission to shape the future of stealth jet and drone operations.” The UK Defence Journal cited a source as saying divers discovered that the ship’s propeller shaft appeared to be damaged. According to Sky News, the Prince of Wales is now anchored southeast of the Isle of Wight in England.

OK, let's start with obvious--aircraft carriers of this size, and Prince of Wales is a very large ship, are very complex engineering "products" which, due to their inherent complexity, are bound to have a higher probability of getting something out of order than, as an example, even a fairly large motor yachts, like this gorgeous Fleming 78, my dream never to be realized: 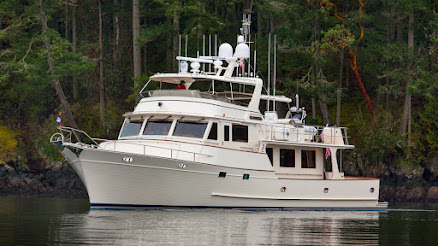 But even these boats tend to break down now and then. But with HMS Prince of Wales we have s "slightly" larger problem, even larger than that with its fire protection sprinkler system. It is about the main propeller shaft. Roughly speaking--if it is an assembly which keeps propeller ON the shaft, this might be resolved in a fairly short time, BUT...if we are talking about shaft as a whole... Oh, boy.

This is roughly how it looks like (give and take) but the main issue of shaft always is its need to be centered with surgical accuracy, otherwise you will have a vibrating noisy ship which will not be able to serve a third of its life. If the damage is to the shaft as such, this may mean either the new shaft or repairing and re-centering the damaged one, this may take months. But at this stage we don't have any details, so be patient. It is embarrassing, no doubt about it, but for now I would wait for details of what, how and why this damage occurred.

But I agree, things were getting broken with increased frequency around the western world and it is difficult to ignore--across the board things simply refuse to work. If this Ukie "counter-offensive" (in reality--couple battalion attempt at attack tactical episode) which resulted in them having their asses handed to them, naturally, one has to ask the question if those American and British "advisers" planned this whopper? If they did, it merely confirms a suspicion which increasingly becomes a conviction that Western military planners are not good, in fact, incompetent when it comes to fighting a real war. And this is only natural for the realm (Western civ.) where any workable policies and solutions have been completely substituted with the PR activities, which do not require serious skills in anything. Hey, I didn't invent Communications Departments and programs in Western universities. So, yes, shit ceases to work in the West because it is conceived in the alternative universe and is designed as such.

It is akin to HMS Prince of Wales which out of two years in commission spent about 80 days in the sea. Well, on the other hand USS Gerald Ford, four years after her joining, sort of, the fleet, still hasn't been combat ready. The issue, obviously, is systemic and no amount of makeup and voodoo ceremonies can hide the ugly truth of modern West from increasing number of people both in and outside the combined West. Shit will continue to break down and the frequency will only increase. I don't know how the issue of Turkey and Saudi Arabia, and Egypt, joining BRICS will be viewed from Washington or Brussels, but what is absolutely clear, such a move will be the end of NATO as we know it and political and economic crisis unfolding in the West will mark the end of political and economic model whose existence was declared sacred and was supposed to mark the end of history. Can you believe it? Bunch of CEOs and Wall Street banksters bought this shit.

It remains for Mr. Trump to renounce his support for the evil fruits of the Warp Speed operation he presided over. He must face the fact that he was played, and he may be forgiven, considering all the evidence coming recently from the likes of Deborah Birx and others that he was lied to and manipulated. But he doesn’t have much more time to get it right, or else his political career will be over well before the 2024 election. That may be all for the better. America probably needs a clean sweep of our desecrated political landscape. All in all, Mr. Trump was a good soldier, brave and resolute under tremendous adversity, but he’s not the only one who can lead our country back to itself.

Trump WAS played, which does testify to his limited abilities as a statesman, because no serious statesman allows to be manipulated to a degree Trump was--enough to recall why he appointed Mattis a Sec.Def., it is comical--and what James implies and what I speak about for a long time, for the US to not completely disintegrate and maintain its status as major power it will take a new generation of politicians and a demolition of the America's uni-party and the emergence of a strong centrist force. But this is in the future, for now, though, enjoy Saker's description of Ukie "counter-offensive".