Making a "No Shit" Headline Permanent...For a While.

Somebody begins to suspect something. WaPo reports.

The footage of rifle-toting Taliban fighters occupying the presidential palace and rolling up the Afghan national flag stood as a defining image of a failed U.S. effort to transform Afghan society at the cost of a trillion dollars and thousands of lives lost. “Decades from now, these images will be invoked as a vivid example of the limits of U.S. power, and of its inability to fight modern wars effectively or to end them on favorable terms,” said Michael Kugelman, an Afghanistan scholar at the Wilson Center.

Expect a lot of trite self-evident BS like this occupying the first pages of the West's media in coming weeks, with "scholars" expressing their opinions which are worthless in any practical sense. In related news, the sky is blue, water is wet etc. For Kugelman personally--learn about real war, in spare time, you know. The problem, of course, is deeper, much deeper than obvious humiliation of the United States. French globalist rag Le Figaro concludes (in an obvious attempt at numbing a profound butt-hurt) that even America's traditional competitors or enemies such as Russia, China or Iran are not joyful from America's failure. At this stage I need to make "No Shit" headline permanent. No, Russia is not "enjoying" America's humiliation, because real geopolitics and national interests do not work like this. By the "do not work like this" I mean a two-bit sublimation by Western "academe" of own complexes into pseudo-scientific dick-measuring contests in matters in which they have no even minimal competencies--a defining feature of modern West's (pseudo) "intellectual" class. Real great powers care about order and predictability, not some clusterfuck which is left by the United States anywhere it goes to "promote democracy".

Phil Giraldi wrote an excellent piece on this matter, namely American ambassadorship using a pseudo-"scholar" and certified clown Michael McFaul as an example, and stated:

Whenever one gets into discussions about the decline of America’s ability to positively influence developments around the world a number of issues tend to surface. First is the hubristic claim by successive presidents that the United States is somehow “exceptional” as a polity while also serving as the world’s only superpower and also the anointed Leader of the Free World, whatever that is supposed to mean. Some critics of the status quo also have been willing to look a bit deeper, recognizing that it is the policies being pursued by the White House and Congress that are out of sync with what is actually happening in Asia, Africa and Latin America, being more driven by establishing acceptable narratives than by genuine interests.

Not only the United States doesn't have a diplomacy, as a tool of a statecraft, in any operational sense, it fails in something which is even more important--intelligence. As the events in Afghanistan have shown, US "intelligence" estimate on Kabul being able to hold on for "around 90 days" was not just bad, which is always the case in the last few decades, but it was obviously a figment of imagination, and not a good one at that. Recall Patrick Armstrong's:

NO, YOUR INTELLIGENCE IS ACTUALLY BAD. VERY BAD.

Or Margarita Simonyan's famous address to the US:

I’ve been telling you for a long time to find normal advisers on Russia. Sack all those parasites.

They will not, and they will continue to believe own BS, because if they will stop deluding themselves, they will have to live with unbearable facts of their responsibility for what they have done around the world and to own country which is...well, read my latest book. Russia is not "enjoying" because she will have to deal with Taliban on a state level as Afghanistan's legitimate government, but Taliban's first actions, including immediately providing good security for Russian diplomats in Kabul, is a promising sign (in Russian). Obviously some arrangements need to be made, including regarding the fate of ISIS cells (courtesy of the US and British "corridor" for them from Syria) in Afghanistan who need to be eradicated, plus there are issues with Al Qaeda. Russia is in waiting. If Taliban puts Afghanistan under full control and will provide law (well, Sharia is THE law) and order, including, as they already conveyed to Moscow, observing human rights, Russia will remove the title of "terrorist organization" from Taliban, which will open some interesting perspectives for Kabul. Taliban DOES know this--emerging Eurasian market is extremely promising for all participants. 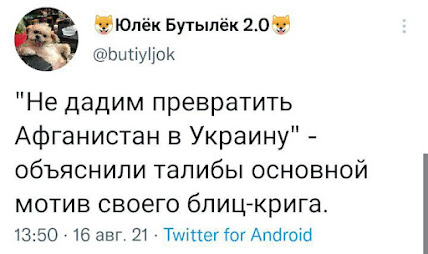 "We will not allow to turn Afghanistan into Ukraine--this is how Taliban explained main motive for their Blitzkrieg".

Remarkably, there is a lot of truth in it. As Douglas Macgregor bitterly states:

All that can be said with certainty is that between 2001 and 2021, none of the senior officers expressed opposition to the policies of intervention and occupation strongly enough to warrant their removal. None felt compelled to leave the service and take their opposing views to the public forum. When it became clear that the collective strategies and tactics in Afghanistan and Iraq were failing, not only General David Petraeus, but most of America’s senior military leaders chose to prevaricate and distort facts in public to show progress when there was none. How many American lives might have been saved had someone only told the truth will never be known. There is no getting around it. America’s senior civilian and military leaders (together with their supporting service bureaucracies) are fundamentally incapable of developing or implementing effective military strategy.

They can't tell the truth, because:

And that was the case for a long time in America and that is a true "No Shit" moment. They will learn nothing.
UPDATE: for those who are interested--the interview of Boris Gromov to Vzglyad (In Russian). Use Google Translate--it is worth it.
Posted by smoothiex12 at 11:43 AM