Niall Ferguson Has No Idea.

Russians discuss today a piece Niall Ferguson of Hoover Institute penned for The Economist (red flag immediately) and many scratch their heads in disbelief. Whole piece was translated and is posted at a famous Russian resource InoSMI (Foreign Media), and even respectable RIA gives a summary of this "historic insight" (in Russian) under the title A Big War Was Promised to the World Because of the Crash of American Empire. To understand who Mr. Ferguson is, I posted a link to his bio above, one has to immediately recognize that he is the man who never held any viable job in his life and is a product of humanities departments of Anglo-Saxon educational institutions which gave us BoJo, W, Obama, neocons etc. You get my drift. The original of Ferguson's piece could be found at The Economist site for those who have a disposal income they feel no compunction in wasting on all kinds of pseudo-scholastic psychobabble The Economist is known for, but here it is:

Niall Ferguson on why the end of America’s empire won’t be peaceful. As it leaves Afghanistan in chaos, America’s decline mirrors Britain’s a century ago. It may also invite wider conflict, warns a historian

Before I get to this Ferguson's piece, I have to mention the other glorious (and not without a talent or significance) British mind, late Sir Roger Scruton, who being a nominal British, or Anglo-Saxon in general, "conservative" left after himself some rather strange (pseudo)historic constructs on matters of global balance of power, such as his conclusion that, and I quote:

John O'Sullivan has forcefully argued that the simultaneous presence in the highest offices of Reagan, Thatcher and Pope John Paul Second was the cause of the Soviet Collapse. And my own experience confirms this.

Well, it is natural for former editor of a neocon rag National Review to be fully a-historical and ignorant because that is what Anglo-Saxon-Jewish "conservatism" is--it is a narrative which fails in three major aspects, which Ferguson's piece demonstrates perfectly. Albeit, it has to be noted that when faced with complexities of a modern world most historians everywhere begin to make one huge mistake--they start to draw parallels to cover up own incompetence in practically any mechanism which drives modern world. As a result, they produce a distorted picture at best, at worst--they falsify, both willingly and not, the whole history. I am on record about my extreme caution regarding drawing any historical parallels, and when I do draw them, I do it with major caveats. This failure with "historical parallels" I usually tie to a second failure of Anglo-Saxondom "history"--it is its utter incompetence in modern warfare and global power balance and Ferguson's piece is an Exhibit A of a beaten to death, trite and ignorant historical narrative.

American decline DOES NOT mirror Britain's decline in any way since at the height of her power British Empire could subdue aborigines with the power of her 16-inch guns, carried around the globe by the squadrons of battleships of the Royal Navy and London could manipulate global politics to a degree being an island, a locality insulated from travails of a continental warfare with all its horrors that is, and if Ferguson does not understand the difference between nuclear superpower which can destroy the whole world several times over and tries to draw parallels with a senescent Empire which by 1939 was a hollow force militarily and could not out of own means stand against Nazi Germany and her allies, Ferguson needs to refresh his "history" by reading a true brilliant British mind: 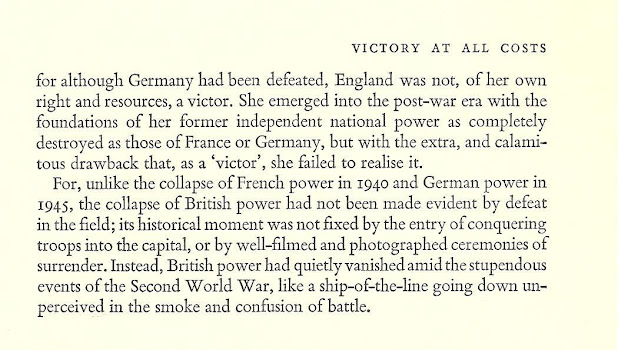 Great Britain went out as a lesser of the Big Three both as a result of economic weakness and inability to develop a sound strategy for WW II, an event which was rewritten by Anglo-Saxon historians to such a degree, that both in London and D.C. it long ago stopped being connected to the reality of events of the XX Century completely. But I am sure Ferguson understands those intricacies of the WW II events and a default nature of the America's superpowerdom in 1945. Right? Today, when Great Britain is a tertiary military power whose military potential is dwarfed by that of the United States and Russia, and China and whose economy is primarily FIRE, that is largely non-productive one, we come to the third failure of Anglo-Saxon "historians" and "intellectuals"--they have no clue about how real economy works. Enough to read the rag in which Ferguson published his piece--The Economist.

Few publications are as delusional and are detached from the world's economic reality as London's own The Economist (and the group which owns it). In many respects The Economist could be viewed today as a log of the decline of the global Anglo-Saxondom and of Britain's desperate desire to feel herself relevant in the world which ignores The Economist's analysis and virtues and moves on based on military and economic power which dwarfs anything Great Britain even had. And here is the main point, there are NO parallels between British decline which was protracted and...only relatively insignificant against the background of the colossal events of the WW II and of the Eastern Front which played a crucial role in both British decline and America's emergence as the post-WW II superpower. This history is yet to be fully written and it surely cannot be written by likes of Ferguson. Not only there are no parallels between Britain's and American decline, but we are in a completely new paradigm and stage in world history, where, indeed, the fate of the whole world is at stake--a scale of consequences no British monarch, statesman or intellectual, least of all Churchill, could ever imagine.

The prevention of the possible (predicted by Ferguson) war of American collapse cannot be based on anything Churchill or most other British minds with a claim to fame could ever conceive, being traumatized by British decline and still residing in a delusion of British, long gone, grandeur to which they accommodate the history by means of rewriting it, instead of learning about the outside world. They simply have no mental instruments to grasp a profound difference between the tools of a state in 1939 and in 2021. American decline is based not on the "exhaustion from the empire", especially with the US Dollar being world's reserve currency and the United States being able to export inflation around the world since 1971, but on inability to win any war, especially on cheap, which, when combined with a catastrophic deliberate deindustrialization, doomed the United States--a set of circumstances Great Britain never encountered, not to mention the fact of the United States failing to form a core nation. Superficial similarities between any empires are just that, superficial similarities. All empires fall. There is very little in common between Roman, Russian, British or American empires. In fact, most of what is different between them dominates the balance and drawing any parallels between them is a fool's errand.

Appearance of the British Fleet within 50 kilometers of Jutland Peninsula meant that this fleet must be met with same of Germany, resulting in a bloodbath in 1916. Bismark engaged HMS Hood at 26, 500 yards with final third salvo at around 14,100 yards, in 1941. Neither 1916 or 1941 military and geopolitical realities correspond to the present realities. Today whole of Royal Navy or US Navy's CBG can be destroyed in bases with salvos from 4,500 kilometers away or in the ocean from ranges of 1,500 kilometers. The seat of the British, or any other, for that matter, Government could be destroyed with the accuracy and precision unmatched by anything in the history of human civilization and all this could be done without the use of nuclear weapons. Or with them, if it comes down to it. This is what keeps today the world in balance and at peace--inability of the combined West to match those capabilities. These are the realities of modern world which many in Anglo-Saxon world with graduate and post-graduate humanities degrees refuse or fail to acknowledge and continue to pretend that some past glories may somehow compensate for the lack of serious technical, military, geopolitical and economic knowledge. But that is the issue I write about non-stop--they just cannot learn, because they cannot handle the truth(c). Ferguson's meandering piece in The Economist is a perfect example and illustration of the causes for a general decline of Anglo-Saxondom in the XX century. Or speaking in layman's lingo--Ferguson, go and goddamn learn your historical facts.