You don't need to know Russian to understand a commentary, the picture is worth a thousand words.

Urs Fischer thought that a city with one of the finest, if not the finest--St. Petersburg will have issues with this statement--art and culture scenes in the world, Moscow that is, was definitely lacking in terms of "art". So, here it is, a pile of shit, as it became known immediately in Russia, is now demonstrating a very "advanced" Western culture and art. I omit here all the details how this "art" appeared in Moscow but here it is. Russians have a gradation for this type of modern art:

I think Fischer's idea was to do an installation, because for a performance, even very sophisticated Moscow has enough people with baseball bats and good fighting skills, that Fischer may not have survived a performance. So, let's call that pile of shit an installation. But, of course, nothing is new under the Sun. One immediately recalls a genius Danish cartoonist Herluf Bidstrup who already in 1950s saw what was coming. He was a communist, you know--the old school one, a real deal. 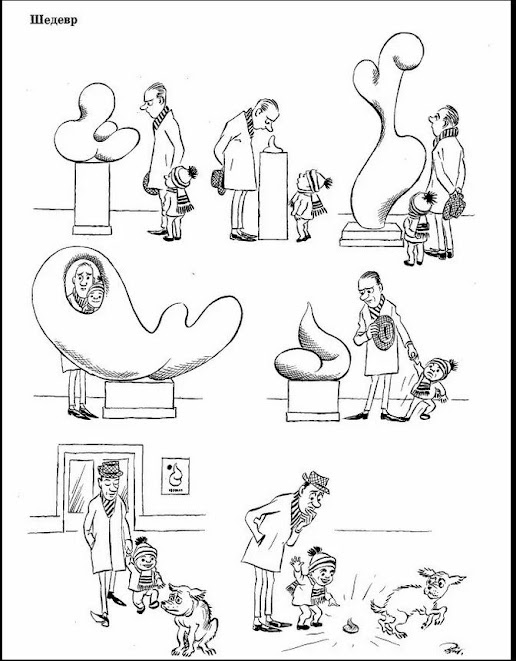 His work, marked by a true artistic genius and incredibly precise social commentaries, remains relevant even today. Looking at a pile of shit disgracing the Moscow-river embankment one can only cringe about the degeneracy which in modern West is being peddled as an "art".  I am sure somebody is having really bad few days in Russia's Culture Ministry, because the reaction of Russian public is unanimous, as it would by any human, who discovers that somebody took a dump at the threshold of his or her house.
Posted by smoothiex12 at 3:00 PM