Now They Finally Admitted It.

Take a gander at that. Congressional Budget Office (CBO) suddenly admitted that, how to put it politely, the United States is indefensible against serious enemy. Like, you know, Russia. And even if the United States invests into the extremely costly CMD (Cruise Missile Defense) things are not exactly working out for the US.

Limitations of the CMD Architectures That CBO Examined: The illustrative architectures that CBO examined would be subject to several important operational limitations.• The defenses would have limited capacity—eight LR-SAMs and two fighters at a particular time and location. A raid consisting of many LACMs could overwhelm them. For example, a Yasen-class guided missile submarine in the Russian Navy can reportedly carry up to 32 LACMs (3M-14 Kalibr) in its eight vertical launchers.

You can get acquainted with the whole thing by just following the link above. CBO also provides a map, a very useful one, which in this blog and in my books was discussed non-stop and is at the heart of the matter. Here it is: 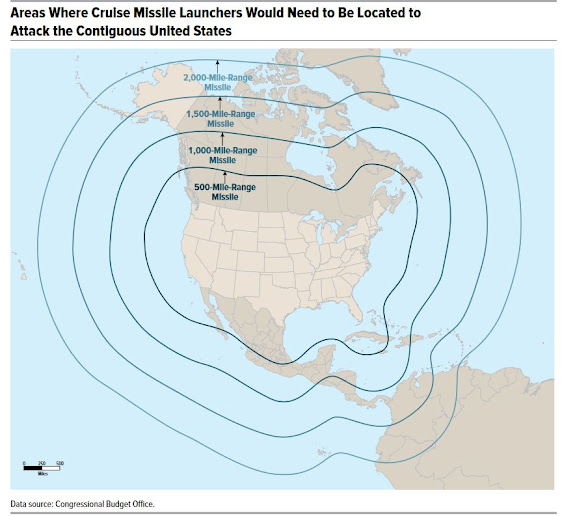 It is all fine and dandy until one notices this phrase by Vice-CJCS who says that:

The best way to defend the United States from a cruise missile attack may be to focus on where adversaries are keeping the ships and aircraft that could fire such a weapon and not take a broader approach to counter any possibility.

Now look at the map above, again. Now recall what I wrote two years ago:

Well, what can I say: 3.14 x 1000^2=3.14 million square kilometers of potential search area for a single submarine carrying Zircons. For comparison, 3+ million square kilometers is the area of India. Good luck coming up with the location probability density mapping for this one. Putin went further and simply confirmed that any carrier of Kalibr family missiles is capable of carrying Zircons. OK, the picture of a modernized (that is Kalibrized) pr. 949A (Oscar II-class) SSGN carrying  somewhere between 20 to 50 Zircons is kinda the stuff of nightmares for any surface combatants, but it is what it is.

Then recall, that already now Russian Navy takes deliveries of a new Kalibr 3M14M with a range of 4,500+ kilometers, which means 2,800+ miles, and this range is not even on CBO's map. Rightly so, because such strikes can be carried out without leaving defended zones for carriers of such missiles, ranging from surface combatants to submarines, to strategic bombers. That was the whole idea behind creation of new missiles by Russia--to force the enemy to deal with them only at the terminal, thus leaving precious little time for detection, tracking and shooting them down. This, mind you, applies only to subsonic land-attack missiles of Kalibr family, everything else in Russian arsenal flies either high-supersonic or hypersonic which is not interceptable in principle by modern means at US disposal. In this case the probability of the leaker is defined merely by probability of normal functioning of the cruise missile.

Surely, the  geographic peculiarity of the United States is such that frontal defense against the ocean's "background" is a natural choice: 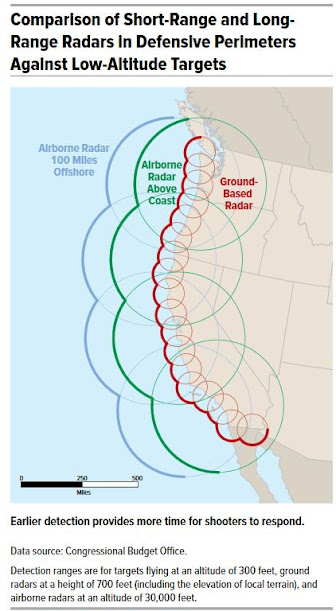 But the ranges of modern cruise missiles are such that, as CBO's report generally admits, this all is good primarily for non-state actors and regional powers trying to attack US territory. In case of Russia and her land-attack cruise missiles, the salvo could be delivered not only by a direct path from a launch point in the ocean but also by means of bypassing future CMDs over land be that Mexico or Canada. In this case, the detection of missiles becomes a daunting task due to:

1. Submarines with missiles being still within the area of the ocean which requires a very large patrol force to conduct an exhaustive ASW search even in case of a reliable datum, e.g. it may take duty Patrol/ASW aircraft 3-4 hours to get to datum to start with, which leaves ample time for submarine to break off;

2. Detection of terrain hugging stealthy missiles of 3M14(M) variety over the ground is an extremely difficult task because of the ground clutter and other interference.

3. Launch from a new iterations of "bastions" making any attempts to counter launch itself impractical.

Here is a demonstration of a salvo of a combined surface-submarine force of Russia's Pacific Fleet at the state of Washington, without leaving a well defended position near Kamchatka Peninsula. 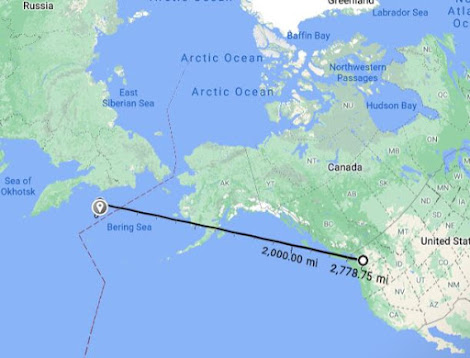 So, basically, what CBO and JCS are arguing here for is... a lower end, when compared to Russia, limited national air-defense which could be, and most likely already is, too little too late, once one considers a trajectory of evolution (if not revolution) of modern missile technology which already sees ranges of 10,000 kilometers within reach. While 9M730 Burevestnik (Petrel) has basically unlimited range and hypersonic terminal speed. So, in this case the proposal for such a CMD in the United States is more about feeling good because doing something in this field and, of course, good work program for Pentagon's contractors. But CBO's readily admits:

Although CBO’s illustrative Architectures 1 through 4 would provide CMD coverage of the contiguous United States, they would have limitations. First, some of CBO’s calculations of system performance are based on best-case assumptions. For example, radar detection ranges might be less than the distance to the horizon if the architectures’ radars had difficulty distinguishing low-altitude or stealthy LACMs from ground clutter (radar reflections from the surface). Second, imperfect tracking information would decrease the effective reach of SAMs and fighters because they would not fly the shortest route to their target. The range of results for each architecture should account somewhat for such uncertainties. Finally, other factors, including limited shooter capacity, the need for positive identification of targets, and measures that adversaries could take that would decrease the effectiveness of the system—such as programming LACMs to fly indirect routes, launching LACMs close to the border or coast, or using faster LACMs—are worthy of consideration by policy-makers weighing the merits of fielding a national CMD system. Addressing those limitations would increase costs.

In other words, the scenario is built primarily around some "rogue" power (state or group) getting its hands on container type Kalibrs (3M14s) which could be carried by all kinds of commercial vessels and while it is certainly something in terms of defense, in case of serious conflict and if built, this CMD will be of a very limited use against peer, but then again, if, God forbids, this comes to Russia striking the United States proper conventionally, it wouldn't matter because the most likely final state will be a nightmarish scenario of nuclear exchange between Russia, US and, likely, China. This, must be avoided by all means. But the most instructive about this CBO Report is admission of what I wrote about for the last 7 years, in fact, much longer than that--new, radical military technologies are already here and it is them, which forced the United States to face a bankruptcy of its views on warfare and its self-proclaimed primacy in the military-technological sphere. Don't tell me that I didn't warn about it, I, sure as hell, did. Do I have a smile on my smug face right now? You can bet your ass--I do. I love "I told you so" moments. Well, I am a mere mortal sinner;))