Went Under The Radar.

I completely missed it but as it turned out, during Kavkaz-2020, the SSK Kolpino launched the anticipated and now fully operational 3M14M Kalibr land-attack missile. This one is 3M14 in the name only--it has a range of 4,500 kilometers (yep, this is not a typo) and 1 ton warhead (in Russian). If that hasn't been bad enough, now anti-shipping, M=2.9 on terminal, 3M54 Kalibr missile has same 1 ton warhead and the range of...1,500 kilometers. Just to give an impression what that all means, imagine the salvo of two, or three, small missile ships of Russia's Caspian Flotilla at the surface targets inside the Persian Gulf. 16 or 24 such missiles, which accelerate to almost M=3 on terminal is a nightmare for even most advanced and sophisticated air-defense.

Same goes for the salvo from Russia's Black Sea Fleet within the Black Sea which covers pretty much the whole of Eastern Mediterranean, thus making any kind of deployment of any surface assets by anyone, in case of war, a guaranteed game of Russian Roulette with all chambers of the revolver loaded. I write about this for years, I will reiterate: the warfare as we know it is over. I will just remind you what was written about regular, impressive as it is, 3M14 a year or so ago by one of America's few naval realists:

Russia’s new strike capabilities give its navy and, in particular, its submarine fleet a tremendous ability to influence the European military balance. The GIUK Gap will not provide a geographic crutch to help mitigate the threat, as long-range weapons allow Russian submarines to operate from the relative security of the Norwegian and Barents seas. For example, a submarine-launched cruise missile (SLCM) with a range of 1,000 miles would give the Russian Navy a potential patrol area of 100,000 square miles from which it could strike Bremerhaven while remaining reasonably secure.

Feel free to extrapolate what will be the safe area for launch by any carrier of 3M14M both at NATO targets in Europe or North America if, God forbids, someone decides to start something stupid. I can totally understand, and, frankly, feel for many British, American, Russian or French navalists when imagining how their Mahan-induced  universe of massive fleets duking it out in a Midway fashion implodes on them. It is really scandalous (not really) having some thing of around 800 tons of displacement, such as this: 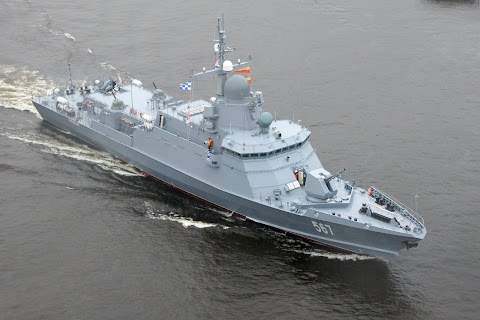 Launching 3M54M from the inside of the Black Sea, in fact, barely leaving Sevastopol or Novorossiisk naval bases and sinking some $1.5 billion DDG in Mediterranean, or hitting aircraft carrier, or launching 3M14M at... just let your imagination fly. I feel for navalists, I do--I was one myself, long time ago, before I completely redefined navalism for myself away from Mahan. There is a reason I admire Elmo Zumwalt--a man and a thinker, not the insult which a floating whatever it is named after him, which would make a combat admiral cringe--all his life he fought to create a combat-ready fleet, not some astronomically expensive sitting duck, which wouldn't even know what hit it. Zumwalt the man, certainly, deserved to command a respect even from those who were his opponents. Anyway, it is what it is, and don't tell me that I didn't warn you. It was coming and anyone who didn't hide their head in the sand could see how the whole thing was forming already in 1970s and especially 1980s. "Damn the torpedoes", "receive targeting"... Enjoy the revolution.
Posted by smoothiex12 at 12:50 PM