A rather interesting article by Andrew Metrick in October issue of the US Naval Institute Proceedings which is a very welcome respite after reading and watching all kinds of min-boggling pseudo-scientific gibberish such as this Swedish dude's "insights". Metrick's article in Proceedings has a very simple title: (Un)Mind the Gap. The Gap, of course, being Cold War's good ol' GIUK (Greenland, Iceland, United kingdom) Gap, which served as a , using Russian lingo, Protivolodochnyi Rubezh (ASW barrier) standing in the way of Soviet submarines trying to break out into the Northern and Mid-Atlantic Ocean to harass NATO-crucial SLOCs and sink all kinds of vessels and naval ships.

Metrick, to his credit, gives some retrospection into Anti-Submarine Warfare of the closing phase of the Cold War 1.0 and writes:

The last generation of Soviet SSNs and SSGNs from the 1980s were just as quiet as the Delta IVs. The final batch of Akulas built before the dissolution of the Soviet Union were quieter still. SOSUS and the Integrated Undersea Surveillance System no longer were the silver bullets they had been during the halcyon days of the 1960s. The United States and NATO responded with both technical and operational solutions. On the technical front, the United States invested in new deployable acoustic surveillance systems, including the Surveillance Towed Array Sonar System (SURTASS) and its controversial low-frequency active component.10 Concurrently, technical solutions were paired with increased cooperation between surface and aerial assets to track Soviet submarines.

It is an important admission since even in 1990s, due to propaganda inertia even some "analysts" who were supposed to know better didn't know better about USSR and Soviet Navy closing the proverbial "acoustic" quieting/sonar gap in 1980s, which lead to a complete dramatic operational shift in the oceans with Soviet Subs not only breaking through GIUK Gap but traveling to and patrolling entrances to the Strait of Juan De Fuca (forget the Gulf of Alaska--patrols there were a routine in 1970s) in 1980s thus controlling exit of US Navy's subs from their base. Should late Tom Clancy have been alive today he would have had aneurysm reading memoirs such as by CO of the Victor-III class (project 671 RTM) K-492 SSN of Kamchatka Flotilla now Rear-Admiral Dudko, who writes about such operations in his "Heroes of Bangor. Operation Sea Wanderer. Submariners of Kamchatka" (in Russian).  As I state constantly, in fact, ad nauseam--the story of the Cold War 1.0 hasn't been written yet. Most (not all) what general public in the West knows about it is sheer propaganda, which was well tailored to the fact of the Soviet collapse. Reality, of course, was much more complex. Metrick's retrospection, in this case, is an effort to be lauded.

Metrick is also correct when points out that:

After the Cold War, the United States and NATO largely abandoned their ASW capabilities.

But, he is not the first one who signals a decay of, usually, very fast degrading and, arguably, most complex naval skills such as ASW. Well, US Navy doesn't like unglamorous, very hard, tedious and complex ASW, aka "slow warfare". Degradation of US ASW was pointed out by US important ASW authority John Benedict as early as in 1997 and then in 2005 providing "score cards" and analysis of the US Navy's ASW trends. 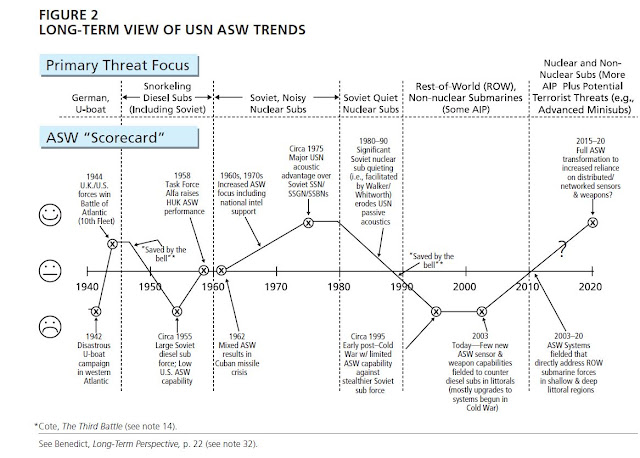 Today, this trend analysis must be adjusted dramatically and the author acknowledges it, while making one major strategic mistake:

The primary mission for Russian attack and guided-missile submarines is to prevent the reinforcement of the European theater from the United States by sea. Today’s Russian platforms may resemble those of the Cold War, but their weapon systems have improved dramatically. Russia does not need to hunt sealift vessels in the open ocean to halt reinforcement of NATO across the Atlantic. Its long-range land-attack cruise missiles can strike the vital North Sea port infrastructure in Belgium, the Netherlands, and Germany from launch platforms in the Norwegian and Barents seas. The revolution in Russian naval long-range strike capabilities has dramatically decreased the relevance of the GIUK Gap.

While Metrick does a good job describing an effect of a salvo of tens of 3M14 missiles on Bremenhaven as a main "unloading point" of arriving NATO reinforcements to attack Russia (yes, namely this way, not the other way around), he is incorrect in assuming that such an asset as Project 885 Yasen-class SSGNs will be involved in striking European ports--for that Russia has more than enough 3M14 and X-101s loaded on a fleet of missile corvettes, SSKs and strategic bombers of Tu-160 and Tu-95 variety. The first salvo from these assets may involve up to 150-200 long range cruise missiles--all of them within the range of any European port capable to receive reinforcements from the US. Yasens are a different breed--they are specifically designed for operations on SLOC, their own ASW (against NATO subs) and, finally, these are dedicated CBGs killers, more so than even monstrous Oscar-II (Project 949A) SSGNs. Next year, first launch of hypersonic 3M22 Zircon is planned from one of the Yasen-class subs. This weapon changes calculus of any war on the high seas completely.

We will never know, of course, a typical load of Yasen-class SSGNs once Zircon is out of IOC and is deployed fully. Even 4-5 of such weapons, when combined with the load of Kalibr (including ASW missiles) family missiles and P-800 Onyx, is enough to deny operations in case of war of couple of US Navy's CBGs, thus removing ultimately required surface escort for reinforcements. In general, all of it doesn't look good for NATO. Metrick DOES conclude along the same lines:

Russia’s new strike capabilities give its navy and, in particular, its submarine fleet a tremendous ability to influence the European military balance. The GIUK Gap will not provide a geographic crutch to help mitigate the threat, as long-range weapons allow Russian submarines to operate from the relative security of the Norwegian and Barents seas.17 For example, a submarine-launched cruise missile (SLCM) with a range of 1,000 miles would give the Russian Navy a potential patrol area of 100,000 square miles from which it could strike Bremerhaven while remaining reasonably secure.

So, why Metrick's article is important? It DOES acknowledge, however incompletely, a new reality of Real Revolution In Military Affairs in one of very few reputable American military media, which still retains a degree of respect among military professionals globally. There are things I disagree with Metrick on some operational matters, including his generalities about  UUVs and operations above Arctic Circle, but at least these are disagreements on practical matters. It is good to see that someone tries to take a realistic assessment of the situation and maybe, instead of unleashing unwinnable arms race, may arrive to a conclusion that some other than military solutions are needed in settling things between combined West and Russia. After all, Russia is not that interested in the West other than the market. West can have its "values" and feel secure about it--Russia doesn't share them. Any attempt, however, to impose those "values" by force will have a devastating response and good that this is recognized, however, implicitly.
Posted by smoothiex12 at 10:10 AM