As I Always Say, European (And American) "Left" Is Not Left.

All these liberal or so called "progressive" (in reality fanatics of "progressive" totalitarianism)  Do-gooders, such as all this so called "progressive intelligentsia", most of it from ultra-left wing and which, for the most part, is badly educated in any serious field (I do not consider degrees in journalism, political science or PR an education) and who thinks that pushing its "climate agenda", gender agenda, so called "antifa" agenda--you name all those so called progressive fetishes--is a cute game, they should think twice. It goes without saying that with the exception of few fanatics, such as Green Peace raiders and terrorists, facing REAL troubles is nothing like these liberal universities campuses' "trouble" they face, especially when are protected by law enforcement agencies in their pathetic petulance. Nor being smacked into head with stone or some object, or even getting a good size hematoma from police baton really counts. No, not that.  Real problems are not in their universities and safe zones' programs of growing strong and thoughtful people. I know how the tank brigade smells, sounds and looks when it deploys from the outskirts towards crucial infrastructure inside a major metropolis. I would love to see masked "antifa" or other "climate" progressive activists, or, more appropriately, terrorists, experience when T-64 (or Abrams) runs over you or they face people who actually have orders and have capability to use automatic small and large arms to cause real harm. I know how a person who just lost three distal and intermediate phalanges and has a fibula sticking out of the calf feel.

Well, from politically correct, but, evidently, really pissed off Holland, outraged farmers decided to show how they "appreciate" all this insane climate BS spread by mentally not-well people who, actually, never worked a day in the honest hard work which benefits people. You know, like growing food. Here are Dutch farmers today (courtesy of AFP, ANP and RT): 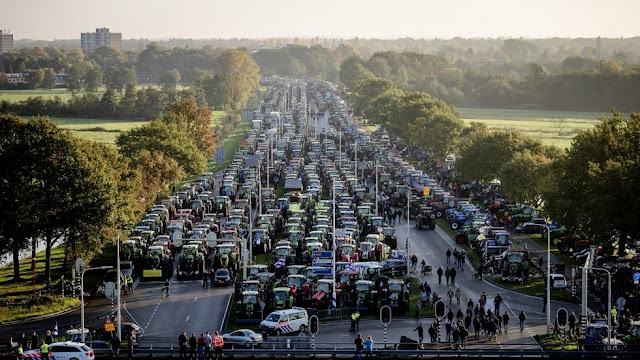 Mind you, these are just tractors driven by pissed off Dutch farmers who are not going to take shit anymore from anyone, especially European wussy left. You can read about this at RT's site. These are just Dutch farmers with tractors. I, in this case, have a question--how many Western "eco-activists" and antifa have real experience with combat weapons, say of DShK caliber, can use RPG-7 or know how to organize platoon in offensive or defensive? I would say extremely very few among the people, especially in Europe, who push for the so called "left" agenda. The next question, of course, what are they going to do when they will begin to lose limbs, experience really nasty concussions (with PTSD and degrading of cognitive faculties to follow) not from stun grenades, but from something like RGD-5 exploding 10 meters away with no protective barrier (fragments could be very nasty).

When shit hits the fan--and judging by inspiring Dutch farmers' demonstration, things begin to boil up--nobody will need degrees in climatology, public relations or journalism. Nobody. Ability to execute a plan which may involve extreme violence against those who are trying to destroy what's left of civilization, that will be valued, together with ammo, food, antibiotics, serious pain killers and, importantly, manpower  (like in REAL men), most of all. Dutch farmers' demonstrations are a very good and healthy sign. It is also a reaction of honest hard-working people to a cabal of spoiled and illiterate morons constituting European political and media class who push suicidal economic and cultural policies. For now it is peaceful, relatively:
Wait till people who actually contribute to society will have enough. This also goes completely for US Democratic Party which became a party of treason and sedition, for all my revulsion towards GOP. But that is why these crooks from Democratic Party in House will not start impeachment procedure (just some BS non-legal "impeachment inquiry") against Donald Trump--because, in accordance to Colonel Wilkerson, 90% of firearms in the US are on hands of Trump supporters. There is an excellent moment in a cute "urbanites-against-heartland" comedy Did You Hear About The Morgans, where main characters talk in the small Wyoming town's diner. I'll let you discover this wonderfully relevant conversation on your own. But here is an excellent preview of an unbridgeable American divide:
Looking at these protests in Hague, one can not escape this premonition that something's gotta give and is about to give. It will. In fact, we are in the process of this giving and my bets in this are on those who know how to drive tan...I mean tractors, tend to land, grow food, shoot weapons and face real difficulties. In the movie, everyone reconciles but we do not live in the Hollywood movie and it may get really ugly because the powder keg is ready to go off--the signs are all around us. The tank brigade is already at the outskirts.
Posted by smoothiex12 at 1:48 PM