Once in a while. She should. After all, Metamucil was invented primarily for people of a fairly advanced age, one of the defining features of which is slowing down of digestive processes which make it difficult to go potty. Hillary is in this age category, which is a primary user of this fiber supplement. Metamucil introduces fiber which helps to, you know, go. The point here, however, is not chronic or occasional constipation we all experienced in our lives, but the fact that if this constipation could be blamed on Russia and Putin. The reason this digestive issue is important, the same as Russian hand in Hillary Clinton's losing last presidential elections, because Russian interference into Hillary's world, ranging from, most likely, instigating Hillary's constipation to helping to out her hubby's closest pedophile buddy, now suicided Mr. Epstein, opens a wide range of applications. If phenomena ranging from constipation to losing in Vegas' casino could be explained by Russian interference, then anything could be explained by this. Remember Hurricane Katrina and devastation it brought? Russians. Remember Hitler? He was Russian, in fact, Putin is Hitler 2.0. Remember hubby Bill's not resisting a blow job in Oval Office? Was arranged by Russians. Maybe even personally by Putin. And Hillary, apart from inventing this method of tracing a causality, surely, uses this method of explanation in full.

We all just learned that:

Former Secretary of State Hillary Clinton asserted that the Russians are attempting to undermine the 2020 election by backing Representative Tulsi Gabbard (D., Hawaii) as a third-party candidate, stating “she’s the favorite of the Russians.” Appearing on Obama campaign manager David Plouffe’s podcast, Clinton made a number of claims regarding Russian meddling in U.S. elections, including that Gabbard’s substantial social-media support relies on Russian bots. Gabbard was the most-searched candidate after the first and second Democratic debates. “I think they’ve got their eye on someone who’s currently in the Democratic primary and are grooming her to be the third-party candidate,” Clinton said on the podcast. “She’s the favorite of the Russians. They have a bunch of sites and bots and other ways of supporting her so far.”

You see, Russians and Putin are omnipotent. They literally can run US politics and undermine American democracy on a whim. Obviously Tulsi Gabbard--the only Democratic candidate with a brain--seems like a totally reasonable point of application of Russian interference.  But, I think, Hillary Clinton underestimated the power of Russian interference in American democracy. I think this interference is much older and much more insidious and profound than Russians getting behind Tulsi Gabbard in next elections, or Russian controlling current POTUS. I think this Russian evil plan goes back to much earlier times, in fact to Hillary very own hubby's tenure in the White House. It was namely then that Russian launched their macabre plan of turning US political elites into a collection of sociopaths afflicted with mental constipation for which no Metamucil for mind has been invented yet. This, inevitably, led to the United States becoming ungovernable and non-agreement capable. This also brought about the ongoing implosion of many American institutions, some of which were loved globally, like Hollywood, when it was making actual movies, not second-rate Public Service Announcements,  as it does today, or like ever-extolled freedom of speech, which is being suppressed today by internet monopolies and those very same US media who are into constructing narratives, not reporting the real news. I will abstain from getting into the real US economy.

Unlike intestinal constipation which could allow a person to eventually enjoy a relieving bowel movement, a mental one cannot be purged by fiber supplements to a diet. Even excessive amount of fruits and vegetables is not going to have a desired effect. To relieve one's mind from mental constipation one has to work hard not only intellectually but emotionally too, trying to not only become an educated person with wide horizons and critical thinking, but also one with integrity, honesty and self-awareness. But that is precisely what those damn Russkies denied US Democratic Party and its top in a masterpiece of an operation of influence. Take it from Hillary, she knows what she is talking about--after all, she is Clinton. Moreover, I think she herself is a Russian operation and possibly an SVR sleeper-agent. Consider this: if Russians wanted to destroy the United States from the inside, how could they approach the implementation of this plan? No better tool for this job could ever exist than DNC, US main-stream media and decrepit US humanities "education". Hillary is a blood and flesh of this system, in fact--she could serve as a poster child for it. And she proved it beyond a reasonable doubt when, escaping enemy fire, she, as a Secretary of State promoted, together with her POTUS, a mediocre Chicago lawyer, a mindless aggressive foreign policy which resulted today in the United States being in a state of geopolitical impotence and retreat, if to politely describe a collapse of Pax Americana. In fact, Hillary is an author of this policy, which also helped to finally mobilize Russia. It played directly into Russian hands! Oh, boy!

So, is Hillary, then, a Russian agent? Judging by the way Russian economy grows (in Russian) as a result of reaction to Hillary's foreign policy which is still in place, by the way Russian Armed Forces reacted to it by returning Crimea home, or playing a decisive role in liberation of Syria from Jihadists (supported by Hillary), or by redefining modern warfare as a result of Hillary's tireless activity as an instigator of all kinds of regime changes, like this:
by overall reaction of Russians (and many Americans, actually) to seeing a US Presidential Candidate being nothing but a deranged sadistic sociopath--because of that, the United States, is in the greatly diminished position today and Hillary played a crucial role in this rather sad, for Beltway, state of the affairs. Thus, the conclusion is inevitable--she is a Russian asset, because no Russian spy or operation of influence could have dealt so much damage to the United States than Hillary and her...Russian handlers (wink, wink) did? I think Tulsi Gabbard should use this line, that DNC are Russian agents. In fact, I think CIA is a front for SVR and NSA is a subdivision of GRU. And why not? In the world of people with mental constipation anything is possible, and it is possible, when instead of brain one has a pile of stagnant shit. For everything else there is Metamucil (c). 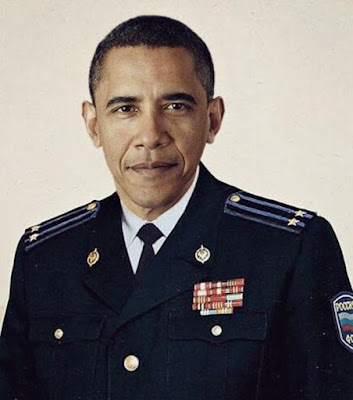