Here is the biography of the author, who is praised in The American Conservative for his new book Last Stands: Why Men Fight When All is Lost. Here it is:

In other words, he is a man who knows about military and warfare primarily from the books and movies. Fine. There is a cultural aspect to the warfare and last stands when everything is lost often are connected to the sense of brotherhood in arms with buddies in the unit and of the esprit de corps, and of simple masculine doggedness, which often manifests itself in extreme circumstances such as war, where defiance in a face of death is well documented. But that is all well-known and books on the warfare and acts of defiance and heroism are plentiful. But Walsh decides to concentrate on such acts, in the words of the reviewer, for:

A new book takes stock of history's last stands and draws questions about Americans' will to defend their nation today.

Here is where the whole thing goes haywire immediately, while Bradley Anderson who wrote the review continues:

The qualities of which Walsh writes are real, and they are every bit as vital to a civilization as he says. They are, however, virtues that can be cynically exploited by those who have little interest in the defense of the United States against the kinds of existential threats that would inspire American men to take up arms and go willingly to their deaths if need be.

Wait a minute, what? There is no doubt that US Armed Forces have enough courageous men many of who did perform acts of an incredible heroism, be that men of 2nd and 99th Divisions in Ardennes in December 1944, or the crew of immortal USS Samuel B. Roberts DE 413, just to name a few acts of American heroism in WW II. But we are talking about different times and different circumstances. The truth is, that what Walsh tries to explain in his book, all those last stands, were driven by more than just masculinity-based cohesion of the unit and courage. This is not the whole story and it never was whole behind what Tolstoy--yes, this unremarkable artillery officer, who wrote few unremarkable books, nobody knows about, in which he specifically pointed out to:

The question that had perturbed Pierre on the Mozhaysk hill and all that day now seemed to him quite clear and completely solved. He now understood the whole meaning and importance of this war and of the impending battle. All he had seen that day, all the significant and stern expressions on the faces he had seen in passing, were lit up for him by a new light. He understood that latent heat (as they say in physics) of patriotism which was present in all these men he had seen, and this explained to him why they all prepared for death calmly, and as it were lightheartedly.

Yep, this thingy, which usually comes from primarily sense of duty and love for the nation, country, when they are in the grave danger. And here is a thingy, of which I speak ad nauseam--the United States lacks this "thingy", since no American soldier ever fought under the circumstances (not since 1814) of the United States proper being under any danger which comes with enemy's victory and him occupying the country. This distinction is crucial in psychological terms and it was and is being demonstrated since Korean War, because unlike most occasions which Walsh chose to describe, the United States remains impervious to any invasion and a nightmare which follows and can afford to lose interest in wars, which in the American case are all, without exception in the XX Century, were wars of aggression and conquest.

But then again, Walsh is a... music critic by occupation and expecting prudent and precise view on the history of wars and human condition in them from such a "historian" is an exercise in futility, and Walsh aptly proves it. He decides to review a famous Pavlov's House defense during the Battle of Stalingrad, whose description is drowned in ideological noise, and then Walsh blows in a spectacular manner: 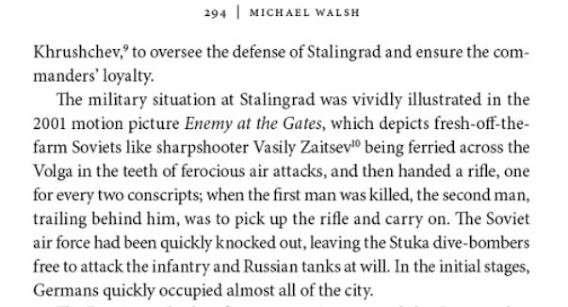 He uses grossly inaccurate, politely speaking, Hollywood BS of a movie as a historic reference point. The myth of Red Army soldiers having one rifle for two conscripts is a purely Western propaganda creation which was debunked so decisively that it is inconceivable that the man, a music critic by occupation no less, who decided to write anything on Stalingrad, doesn't know it. But Walsh, certainly, doesn't. Obviously, Western military "historians" never could understand that the only complain General Vasily Chuikov had in his memoirs was about shortage of fully automatic weapons, which were better for the fight in the rabble of Stalingrad, in famous Rodimtsev Division. But the Red Army fighters all had their rifles and enough munition to fight off the onslaught of the Paulus' 6th Army and its allies. This, so called, "black myth" (in Russian) is yet another demonstration of a deliberate distortion used by the Western "historians" to portray Soviet Union's decisive contribution to the victory in the WW II as merely through piles of dead bodies and rivers of blood. Using Hollywood's grossly inaccurate propaganda as a source for conclusions on a matter of a serious military history arouses immediate question--why music critic by education decided that he can pass any sound judgement on matters which require a serious knowledge and experience within military? I don't know, but that is what general American view on war is--a Hollywood picture.

Moreover, last stands while having not just your buddies, but your home, your families, you loved ones, your culture is what drives men to perform acts of self-sacrifice in those proverbial last stands when everything seems to be lost. This is not the experience the United States military can relate to, despite having its own share of heroism and sacrifice, but in the end, as, I believe, Chesterton stated--the soldier must not so much hate what is in a front of him, as love what is behind his back. This is precisely why the United States couldn't win in Korea, lost in Vietnam, lost Iraq and lost in Afghanistan, because as this insignificant combat officer noted:

"But all the general and soldiers of [Napoleon’s] army…experienced a similar feeling of terror before an enemy who, after losing half his men, stood as threateningly at the end as at the beginning of the battle. The moral force of the attacking French army was exhausted. Not that sort of victory which is defined by the capture of pieces of material fastened to sticks, called standards, and of the ground on which the troops had stood and were standing, but a moral victory that convinces the enemy of the moral superiority of his opponent and of his own impotence was gained by the Russians at Borodino…The direct consequence of the battle of Borodino was Napoleon’s senseless flight from Moscow… and the downfall of Napoleonic France, on which at Borodino for the first time the hand of an opponent of stronger spirit had been laid"

But what does he really know, this loser Tolstoy, he didn't have Hollywood to refer to, because we all know, Hollywood can always "vividly illustrate" just about any bullshit it wants to. That's the entertainment.