On January/February 2021 issue on Foreign Affairs when on Friday visited Barnes & Noble. The only reason I spent this substantial sum of money (this is a price of a half-bottle of Jack Daniels--much more sensible investment) was, knowing that this is a Council on Foreign Relations publication, to preview what victorious Democrats are preparing for America in the nearest future. Boy, I was not disappointed. This volume #100, Number 1 is everything one needs to know about America's decline and mechanisms which drive this decline, if not collapse altogether. The "opening salvo" is Samantha Power's middle school level essay titled The Can-Do Power. America's Advantage and Biden's Case. This is a superb piece in so far as the exhibiting of delusion and lack of any professional adequacy of upcoming America's "foreign policy" establishment goes. Make no mistake, the United States didn't produce competent foreign policy in decades. There are simply no people of knowledge and statue in modern US "foreign policy" establishment capable of sober and professional assessment of both outside world and the internal US political trends to put US "diplomacy" to serve US national interests since nobody can formulate them, least of all American diplomats.

Re: Samantha Power, who is slated to become a big honcho in USAID in Biden's Admin, is known to a be a sanctimonious uncultured lawyer turned "diplomat" as US Ambassador to UN, who was periodically humiliated as a petulant teenager by then alive and well Vitaly Churkin.

Power, being uncultured and badly educated product of Anglo humanities sphere, substitutes knowledge, solid assessments and professionalism with hysterical moralizing and crusading spirit based on delusions and outright falsifications. She can check all boxes in the career path of US systemic foreign policy incompetence starting from Ivy League law background, to Pulitzer for falsification of the Balkan Wars and inability to apply personal experiences prudently. This is precisely the set of qualities required for modern American "diplomats" and Power is perfect for the job.

She opens her piece with a reference to... Madeleine Albright with her "indispensable nation" declaration, granted that even Power admits in her piece that this statement is being "vigorously debated" and goes for the jugular accusing, correctly, Trump Administration in being "incompetent". She thinks that Trump's response to world problems was very bad, which implies that Obama's response to them was very good. Remarkably, Samantha Power, who defended Syria's terrorists at the UNSC and was a part of Obama Admin, on whose watch Libya was attacked, not to mention a bloody coup and civil war in Ukraine have been unleashed by the United States, cannot be taken seriously as a geopolitical analyst--she simply has no background for that. She certainly has a reputation for being unhinged and that's the problem. The case she makes in her piece is an exhibit A of a delusion exercised by US "diplomacy" (quotation marks are deliberate). Power states:

"For all the criticism directed at US foreign policy is eras past, foreign leaders and public largely retained respect for the United States' willingness to undertake challenging endeavors and its ability to accomplish difficult tasks--a significant but underappreciated cornerstone of American power".

I agree, in the "eras past", especially on Power's watch as a bullhorn of Obama's radically interventionist and aggressive "foreign policy", the United States achieved absolutely stunning things, which otherwise no country could have ever achieved:

1. The United States through criminal policies in Libya, Syria and Ukraine made sure that overwhelming majority of Russians, while having no quarrel with American people, abhor the United States and viewed it as number one threat to Russia and the world already in 2015. Russians also made sure that they have enough power to annihilate the United States under any circumstances and made sure that "values" which Samantha Power and Democratic Party, she belongs to, profess are prevented from entering Russia by means of new Russian Constitution.

2. The United States, obviously, performed also an incredible diplomatic feat by making sure that already on Obama's watch Russia and China de facto concluded their political alliance, which, inevitably started to evolve towards a military one. All that while Power was still in UN.

3. US Middle East policies are altogether is an AIPAC-induced mess, which Power has zero power to change and will do as she told by her Israeli-first masters.

So, yes, the United States is a "can-do power" because to fuck it up on this truly historic scale one does need "diplomats" of Samantha Power scale of ignorance and zeal. Of course she is not alone, but there is very little difference, primarily without distinction, between Power and, say, Pompeo.

But Power doesn't stop her attempts to let people forget those bygone "eras" and proposes same ol' routine on repudiation of Trump's "policies" and following what is perceived to be Biden's policies. Again, a difference without distinction. Power states that the United States is a home to 40% of Nobel prize winners and based on that she concludes that the US should show people a way into economic recovery and technical progress. Sure. The problem with this argument is the fact that Power, having American "humanities" degrees, doesn't understand that Nobel Prizes in literature and, especially, economics are a complete BS since are primarily ideologically driven and are in the fields which have relatively minor to outright baneful, such as "economics", effect on human lives. What she doesn't know, of course, is that in the fields which truly matter for serious economic and technological developments, the United States long ago is not a leader, not even close, and in produces as many STEM graduates as Russia, whose population is more than two times smaller. This was in 2016. 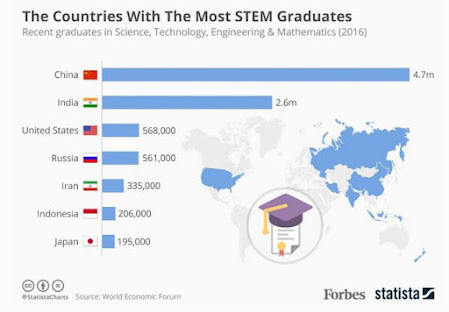 By now Russia accelerates her STEM enrollments while in the United States most STEM graduates are... foreign. If Power thinks, and she does, that one can revive the country through granting non-STEM degrees, such as hers, I have a bridge to sell.  But that is what Power proposes in essence--let's allow foreign students back in the US, since it reflects well on US reputation and is somehow supposed to be related to US... competence, lack of which Power admits while proposing utterly incompetent measures, which allowed China, indeed, to capitalize on by preparing a substantial portion of her STEM graduates in the US especially throughout 2000s-mid-2010s. What Power offers in effect is to prepare highly valuable scientific and engineering cadres for someone else, while continuing to destroy real education in the United States. I am sure the United States is in dire need for Ph.Ds in Diversity, Gender Studies and Political "Science". Can one be more oblivious to the very real issue for the United States than Power?

Remarkably, Power doesn't forget to attack China--I am not going to judge the merits of such attacks--but if Power thinks that already lost Covid-19 Vaccine race may somehow restore US "competence", she obviously wasted her time "teaching" in Harvard Law School, reproducing the now traditional American incompetence in the international relations field, instead of paying attention to actual trends both internationally and domestically. Remarkably, it was CFR's big honcho Richard Haas who in his twitter on January 6th, 2021, traditionally, over-reacted:

We are seeing images that I never imagined we would see in this country-in some other capital yes, but not here. No one in the world is likely to see, respect, fear, or depend on us in the same way again. If the post-American era has a start date, it is almost certainly today

Which only strengthens my argument of the last almost a decade. The United States lost its mojo through a series of events, which I describe on this blog for the last 7 years. Also in my books. America is being destroyed and is being driven into the Orwellian world as a result of a systemic crisis which cannot be resolved within current economic, military and cultural paradigm. But that is what piece by Power, and as a whole issue of Foreign Affairs--can you believe this, they gave Francis Fukuyama podium again, Jesus--are a testament to. You cannot fix the American autoimmune disease, including through her increasingly incompetent and malevolent "elites", whose "intellectual" level and self-awareness are those of high school students. In other words, I spent my hard-earned $12.99 for pretty much what I knew already, I just needed the proof. I got it--there is no hope.

In related news. In a face of political (and criminal) repressions in the US, Maria Zakharova admitted today (in Russian) that there are inquires and requests, primarily from Trump's supporters, about Russian citizenship. As I stated not for once, Russia is more than just superpower, it is also an arc. I predicted long ago that the stream of Western, primarily white, Christian folk to Russia will eventually grow to a river. Current American elites have three properties, they either are insane, or cowardly, or both. These are the people who do conceive of totalitarian society and many crave it, especially on the Democratic side. They do so because they are an urban office plankton, who care only about themselves and are subjected to all kinds of social and psychological pathologies. Such a society has no future and the America of the past is no more. Thus, the threat of violence, civil war, persecution and even mass repressions will drive increasing number of Americans to consider moving to Russia and this is totally understandable.  BTW, for those people who asked, Griezbach family IS in Russia and they are now permanent legal residents and are on their way to citizenship. All kids are with them and are doing great. I could never imagine in my wildest dreams 25 years ago that I will say that: you want real democracy, free thinking, free inquiry and social normality? Russia. That is why it is so hated.