For the past five years or so these pixels have been arguing—nay, clamoring—for the U.S. Navy to build or buy a contingent of diesel attack submarines (SSKs) to fill out its undersea inventory. If anything the logic for going conventional is more compelling now than ever. It offers a way to add new hulls with dispatch, at manageable cost, and without imposing extra burdens on the few shipbuilders that specialize in naval nuclear propulsion. Best of all, a diesel contingent is an ideal implement for executing U.S. strategy in what the Pentagon terms its “priority theater,” bar none: the Indo-Pacific.

I never, obviously, served in US Navy and I know of its internal kitchen from open sources only, such as memoirs and other texts. But I always remember Elmo Zumwalt quoting Rickover that:"The United States Navy got used to traveling first class."(c) In Rick's words "first class" meant large and very large surface combatants and nuclear propulsion. That's the institutional culture--US Navy likes only nuclear-driven subs. And it kinda makes sense once one considers the fact that the United States is an imperial power and she likes to sail anywhere, everywhere to "project" herself. Nuclear powered subs are perfectly suited for this strategic and operational posture since they provide for long-duration, thus translating into very long distances, clandestine operations against enemies, which all, as we know, dream of denying America her freedoms. Yet, James Holmes calls for SSKs. Hm. Holmes speaks in the broadside yet again and pronounces this "M" word, which many in the US are reluctant to say when speaking about actual war (Holmes wants to fight both China and Russia):

...the nuclear mafia within the silent service—the dominant faction among submariners, it must be said—will produce statistics beyond counting to prove that nuclear-powered craft are superior to their conventional brethren. And they will be right—by every measure except what matters. Namely, winning. The SSK is the right tool for the job provided it’s deployed at the right place on the map in the right manner to achieve maximum effect.

Ah, that's warmer. And should I have been American exceptionalist, which, of course, I am not, I would have taken this Holmes' argument to heart, especially since Holmes, almost verbatim, repeats Stansfield  Turner's operational truism brilliantly formulated by him in 1976 in his interview to Christian Science Monitor, titled Who has The Best Navy. I will help you to recall that: 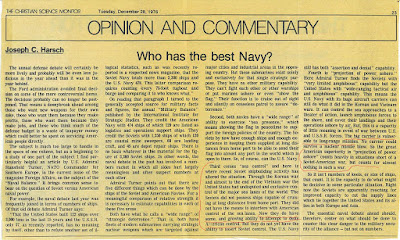 Pay attention to Turner's succinct observation about the number of keels. He delivers it in the clearest way possible: It is the capacity to do what might be decisive in some particular situation. And the first issue with that, if to imagine some scenario of the battle, say, for Senkakus in which hypothetical American-built (or bought) SSKs will take part is this: what kind of weapons will they carry? Holmes describes his scenario in next terms:

Combining submarines with marine geography amplifies their efficacy at sea denial. Array diesel boats along, say, Asia’s first island chain in concert with unmanned combat vehicles, sea mines, surface patrol craft, warplanes, and missile-armed ground troops and you’ve erected a formidable barrier to passage between the China seas and Western Pacific. That’s a barrier that Beijing will think twice about flouting. You don’t need an SSN to stand picket duty, and in fact using it thus amounts to overkill. Nuclear attack boats have sea-control missions to perform on the open ocean. Used imaginatively, inexpensive diesel subs can reinforce conventional deterrence and free up precious SSNs for more important things, all without busting the shipbuilding budget. That’s the reciprocal of producing über-pricey SSBNs to reinforce nuclear deterrence. How’s that for cosmic balance?

Well, it is all fine and dandy (on the paper), but even the brief look at the map (First Island Chain) reveals something significant: 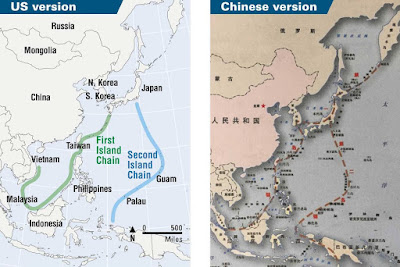 You know what it is? Right--ranges, aka distances. First Island Chain is entirely within the range of a variety of Chinese deadly anti-shipping weapon systems which, in case of real war, God forbids, have a complete capability to shut down approaches to this very Island Chain and deny hypothetical US Navy SSKs what they would need desperately--forces supporting their operations. You may have guessed it already, such forces are US Navy's Carrier Battle Groups and their airwings. No support from them, any SSK operating at those ranges becomes a prey for ASW patrol aviation and surface groups which follow. This is, of course, not to mention the tempo of China buying those pesky S-400s and SU-35s from Russia.

What are, then, the probabilities of hypothetical salvos of subsonic anti-shipping missiles launched from hypothetical US SSKs against PLAN's surface groups to provide a number of leakers is for a separate discussion but I doubt those to be effective against modern naval AD systems. While I totally understand where James Holmes is coming from and I know his bad feelings towards PLAN and namely Admiral Lou, I, honestly, do not see, from what little I know about US Navy, how the habit of "traveling first class" could be kicked, especially in the times of massive stock buybacks and strict bottom lines for CEOs and shareholders. After all, I think, Congress is also on it. But I repeat myself.
Posted by smoothiex12 at 5:06 PM