When France Was Still France.

Jacques Chirac, France's last true statesman RIP. Age 87.  After him--only parade of globalist colorless shills who sold France's sovereignty and finished turning her into multicultural cloaca and a door mat for the United States.
I can remind you what a hysteria France's position against Iraq 2003 criminal invasion created among American neocons. They even wrote this shit, stating that France (to who the United States owes her early existence) is America's Oldest Enemy. 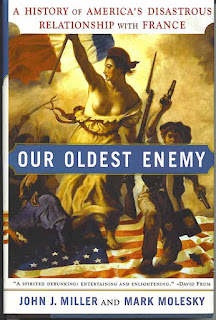 I also remember stickers on the bumpers then: Down with France. It was due to Jacques Chirac's principled position. Today, France is run by plastic bankster boy at the service of globalist "elite". What a contrast. France was sterilized to such a degree that the only person of any qualities required for preserving what's left from France, Marine  Le Pen, will be sabotaged and not allowed to enter decision-making positions. Sad story. One of Europe's last great man is gone.
Posted by smoothiex12 at 11:34 AM