About "strategy"--the term so abused in pop-media that people simply lost the meaning of strategy as means of attaining desired objective in general, and of the political objectives of a war in a military sense. Allow me to quote my poor dear self (I know, not the ethical thing to do). Here it is, from my piece from last year:


Size does matter and so does range and speed whenever anyone talks about weapons. It seems that there is a great deal of confusion which perpetuates itself in regards to a relatively small Russian military contingent in Syria. The most popular indicator of this confusion is a never ending discussion of a possible American attack on the Russian forces in Syria, primarily on the air base Khmeimim. Can such an attack, once one considers the size of forces US can deploy against Russians, succeed in “defeating” them? ... At issue here is not the fact that Russia is a nuclear superpower—everyone knows that. Even the most rabid American Russophobes know this and can grasp, however slightly, the concept of their poor dears turning into radioactive ash pretty fast if they do the unthinkable, such as attacking Russia proper with nuclear weapons. Syria, however, is a bit different—the escalation to a nuclear threshold could, indeed, be controlled by those who hold a decisive advantage conventionally.

This was written long before Vladimir Putin's speech on March 1 this year. Things changed drastically since then. Against the background of USS Harry Truman CBG doing its thing allegedly against IS targets in Syria, Russia, whose main objective in the area is not to allow the mess there go out of control and deter any suicidal desire to unleash wider conflict made her point today.


"It is a cutting-edge weapon, namely a hypersonic long-range missile capable of overcoming air and missile defenses. It is invincible, having serious combat might and potential. The MIG-31 is its carrier as the jet is the most fitted for accelerating this missile to required speeds," he said. "In support that it is not something exotic, [I’ll say] today ten jets have gone on test combat duty and are ready for use depending on the situation," Borisov said.

This is a clear cut warning against doing anything stupid since Russia here does control escalation (God forbids) in a precisely conventional (that is non-nuclear)  way--any surface asset of any navy today is simply defenseless against single, not to speak of ten, hyper-sonic Kinzhals' salvo. It is one thing to demonstrate force, totally another--having counter-force capable of defeating any combination of demonstrator's forces. That is precisely the case here with Eastern Mediterranean and Russian bases in Syria. As long as the parties involved understand the strategic score, everything should be fine, otherwise we may be in line for a rather dramatic demonstration of the weapons which already completely redefined  naval warfare and nobody in their own mind wants this demonstration. My feel (hopefully correct) is that American side on a political level (the one which only matters in a decision making process) finally begins to get the "message" from people who do understand real ramifications and that is what was needed from the get go. Russia doesn't want to fight the US and her strategy works. With increasing number of hyper-sonic weapons of Kinzhal or Zircon capabilities being procured the outcome of purely conventional war in the Eastern Med is very easy to predict but I hate to even venture there.


Just a small visual representation of the kill-zone with the range of 900 miles being covered with possible drop points for two Kinzhals with Mach=2+ capable Mig-31s launching from immediate readiness from some airfields in Crimea and Krasnodar. It would take roughly 10 minutes to reach a drop zone and then with Mach=10 Kinzhals with their speed of 2+ miles per second having about 900/2=450 seconds, or 7.5 minutes to reach targets in Eastern Med. In all--17-20 minutes to respond. I do not imply anything here--I merely wanted to demonstrate the order of magnitude of ranges and speeds involved. In any possible conflict I don't think that Kinzhals will attack CVN itself. Enough to "peel off" Aegis carrying destroyers and cruisers. That is basically what Borisov said today. 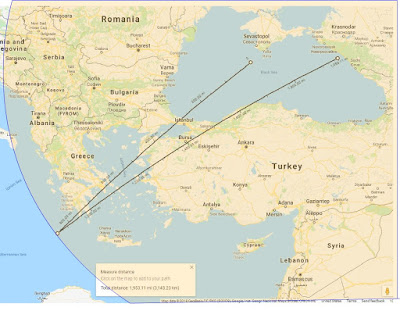