A Rather Gassy Business.

I am no fan of Boston Globe, the rag which gives a tribune to such shitheads as Scott Gilmore, certainly, can not even pretend to be any reputable publication. Here they come again, spewing a lot of hot gas on the issue of Russian gas, which America bought and is going to eventually resell as its own gas, to Europe which is in dire need for gas, and is ready to accept Russian gas, through gas-pipes of both Turkish Stream and Nord Stream, but enough about gas.
Arrival of Russian gas stirs Ukrainian community

After that a lot of smug self-righteous Bullshit is written in this editorial piece, which is expected from most American so called "journalists", but here is an interesting phrase:

Policy makers have imposed a double standard, rejecting domestic gas over solvable concerns while accepting, with apparently no questions asked, the need for foreign LNG shipments with troubling environmental and human rights implications.

If one discounts a traditional fake concern for "human rights", what is highlighted in yellow is actually a very correct statement. Here we have to abandon loony ignoramuses at Boston Globe and concentrate on the opinions of professionals in the field of hydrocarbons. I am no professional in that but I know a thing or two about SLOCs and its reliability and, what RIA (in Russian) Dmitri Lekukh calls a "transport shoulder". It is a very good piece which, unlike Boston Globe's sappy sentimental crap, should be attentively read and taken into account. The piece has a symptomatic headline: To Rob Europe: Why Second Tanker With Russian LNG Is Allowed Into the USA. Indeed, why? Here is a spread, which is even more interesting against the background of my two-weeks old piece on Russo-Chinese Alliance and Northern Sea Route (NSR), and, of course, China issuing, a week later, her White Book precisely on a huge significance of NSR for China.

1. As Russia's Energy Minister Alexander Novak (BTW, the guy who actually worked a lot in real industries, such as metallurgy) points out: he is absolutely not "euphoric" about Russian gas arriving to the US. Since Novatek really doesn't care where  the gas goes as long as Novatek is paid. As he astutely noted: once the gas is sold and resold, the gas molecules remain "Russian" but gas does not.

2. The issue, however, is in the fact of Russia's brand new immense LNG facility in Yamal changes the picture completely and, no matter how emotional some people in the US become about this fact--Russian LNG is competitive with the US domestically produced gas inside the US. Now we are going to Sabetta and this "transport shoulder". See the maps:

#1. European "shoulder" (for some reason "above" Novaya Zemlya). 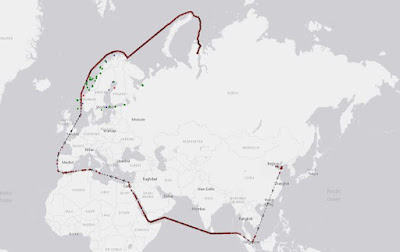 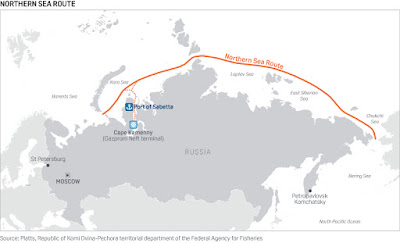 Is it getting "warmer"? Here Lekukh makes a very interesting conclusion: If Russian LNG is competitive inside US on a huge, trans-Atlantic, transport shoulder, what is it going to do to European LNG port facilities which are literally, in a global sense, positioned next to Sabetta. Remember American plans to sell American LNG to Europe? Well, good luck competing with Novatek.  Lekukh, however, goes further and states, and I think he is right, that Americans are no dummies--they know all that. The trick is in globalization of the LNG trade which will make price for American LNG competitive, but also will make already very high energy cost component in European goods, extremely high thus giving US goods an advantage over European ones.

Here, the factor of Russian gas pipe-lines begins to weight heavily and Europeans know it damn well. It is not enough that French Total SA holds 16% of Novatek shares but even SovComFlot's first ice-class LNG supertanker bears the name of late Total's CEO, tragically killed in the air crash, Christophe de Margerie.  She even carries de Margerie's mustache on her bow. 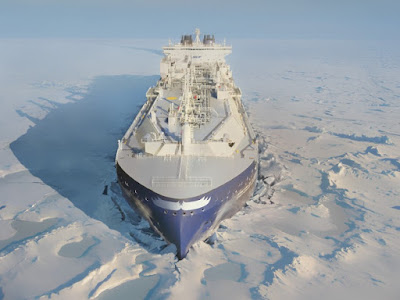 In fact, they know it so well, that Germany already issued permissions for Nord Stream-2 pipeline to be laid in her territorial waters. And then we have to take a look at those "European" LNG ports in.... sure--in Eastern Europe, that is in Poland, Lithuania and other US lap dogs of no economic weight or significance but who completely bought into this "diversification" scheme without doing even simplest arithmetic. One has to imagine the faces of their leaders when hearing and seeing the news of Russian LNG being shipped to the United States? Hey, Russian LNG is so competitive that who knows (and somebody knows, I am sure, wink-wink) that Poland and Baltic States eventually will have to buy Russian gas molecules as... an American LNG. Twice the price, of course. As they say "freedom is not free". The smell of failure is really in the air.

The situation is utterly comical and two main geopolitical questions today, especially after massive Russian intelligence delegation meeting with their counterparts in D.C., are this:

1. Will Russia "play" with the US to allow US enter global LNG Trade and thus giving at least partial competitive edge which may help US to partially re-industrialize her economy.

2. Will Russia, in the same time, back Europe to a degree needed to not let it lose to the US (and China), which, granted pathetic intellectual level and cowardice of European "elites" is entirely possible.

These are no bad problems to be faced with. I wrote two weeks ago about Russia's strategic fork. This is one of them. Now imagine this factoring into the larger game with China which has her own 9% stake in Novatek and wants NSR really-really bad. Once these factors are considered one can totally understand why Massachusetts Ukrainian community is so worried and is full of... gas, as they should. In 2019 Ukraine becomes irrelevant in the larger scheme of things and if Trump releases... I am running ahead of myself here, let's just wait and see.