Remember a couple of years ago I posted this thing?


Run To The Hills, The US Military Is Doomed. No, Wait...

Well, nobody anymore denies a set of very real force structure, readiness, technological and operational problems and challenges US military faces. After all--a lot has happened in the last two years, not least strategically but I still stand by my assertion:

1. US Armed Forces still remain the most potent force in the world, especially US Navy.
2. American soldiers and sailors are among the best in the world.

I periodically browse The National Interest to mostly get a chuckle or two and, if I am lucky, to catch some redeeming (for TNI) and competent thoughts of Lt.Colonel Daniel Davies. Today I stumbled upon  Harry Kazianis' a pearl of a strategic thought titled in a good tabloid tradition of TNI:

Exposed: Why China Would Lose a War against America

I don't know what American military "experts" mean when they talk about "WAR" but instead of writing some long text Kazianis could have limited himself to a two very simple points:

1. Non-nuclear war (controlled escalation to a threshold)  between China and US in the air has 50-50 percent chances of either side "winning" in China's vicinity.

2. The same, but naval confrontation... and here, with all my deep respect to Chinese culture and strides in modernization, PLAN is simply NOT a competitor to US Navy beyond the First Island Chain and the issue has NOTHING to do with a number of DDGs or CBGs. The issue is plain and simple THIS: 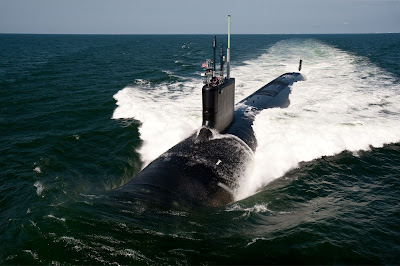 To be a real contender--one MUST have a world-class nuclear attack submarine component and here the US Navy holds an overwhelming superiority over anything PLAN has both quantitatively and, most importantly, qualitatively in its nuclear power sub inventory. Yes, PLAN did declare recently on a number of occasions that its newest SSNs in terms of quieting begin to catch up to first versions of Project 971 Akula and Los-Angles-class SSNs. But quieting, while being very important, is just one of many things which are required for a nuclear sub to be a true killer weapon. Once fleet gets away from A2/AD zones controlled by modern SSKs which guarantee against penetration of something like Virginia-class SSNs, such fleet will require a top-notch SSN, SSGN escort--PLAN doesn't have this. Plain and simple. There are also some very serious issues with Chinese ASW.

Yes, China may (MAY) hold an advantage deep within First Island Chain over US Navy and she may even increase this advantage but PLAN has no realistic way of surviving US Navy's nuclear subs in any remote or blue water zone. But Russia is not selling her Project 885 Severodvinsk nor is sharing with whatever work is being done on what is known today as Husky unified SS(G)N--SSBN platform. Here, China will have to develop a true competitive technology on her own. Doing so in nuclear power submarines field is immensely difficult, expensive and it takes time. And while amateurs point their sights towards US Navy's visually impressive CVNs, currently what dooms PLAN and completely prevents it from any serious challenge to US Navy in a remote ocean zone is underwater and is not heard or seen.

On the other hand, any land combined arms war against China in her vicinity will see US Army decimated and ultimately ground to a halt or defeated in a conventional conflict, no matter what advantages US has. No matter if a Chinese Army is "unprofessional" as Kazianis states, since Chinese will be fighting for their motherland, which US military "professionals" never did in their life and that changes a lot. So, the only thing which comes from this is a need to really find some kind of peaceful arrangement between big kids on the block. No matter how good is US Navy, and it is, despite its problems, a magnificent force, the United States is not in a position anymore to dictate anything to anybody as it was the case 20 years ago. This time is simply gone.
Posted by smoothiex12 at 1:29 PM