Queens Of The Skies.

I love 747s. Let me wax poetic and sappy sentimental here--you look at modern 747 and feel safe and comfortable. You enjoy those recognizable lines with a distinctive hump, and while in the sky you actually enjoy the flight and expect good things only.  I flew both 747-400s and 747-8s and even despite being relegated by extremely high prices into steerage, doing transatlantic is always a joy. Once this magnificent plane overcame its growing pains and matured she became truly a Queen Of The Skies--a testament to a great American aerospace engineering and her elegant hump is recognized worldwide. 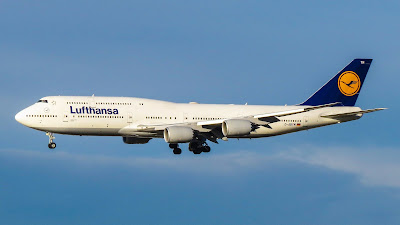 Well, they want to stop 747s manufacturing by 2019, albeit 747s run was extended thanks to Russia's Volga-Dnepr Cargo carrier which ordered 20 747-8 freighters. The reason for ending 747s is well known--economy. Well, not really economy but profits. Make no mistake, I get it, airlines have to operate for a profit and 4-engine jumbo is bit too thirsty for their taste, ergo--less profit. But here is my take: between me being stuck in 747's steerage and the same in some two-engine newbie I would rather feel somewhat spatially limited in 747 than in anything Airbus throws at you, or, rather throws you in. I'd rather feel safe and moderately comfortable than comfortable and having just a double, as opposed to quadruple, redundancy. But here are another considerations which go into travel: safety, aesthetics, tradition, class and 747s' latter part of life is a testament to that. Speaking in plain language--I don't want to see these magnificent birds being grounded and, eventually, terminated. Sure, with modern day engineering it is possible to develop a jumbo even with a single engine. Can you imagine an economy on this one? But would you fly on it? I sure as hell would do my utmost to never put my ass in the most comfortable seat they may offer me in this flying thing. A simple truth of modern air travel is that the same as in 1967, in 2017 we still fly air breathing jet-engines. Yes, they are way more sophisticated and reliable than their parents but the engineering truism still remains: a probability of the failure of a complex system is in direct variation with the square of a number of all (mechanical, electric, hydraulic etc.) connections in this system. This is when you begin to appreciate a gentle rumble of all 747's four engines and this allows you to relax a bit at 11 000 meters over Atlantic.

Now come those crazy Ivans who yesterday said--screw your (super) profits we will stick for awhile with four engine configuration. United Aircraft Corporation and Ilyushin signed yesterday a contract for development and production, starting in 2019, of Ilyushin-96-400M (In Russian). Suck on it, accounting. Not only profits (however important) should be considered when making decisions on how people fly. Soviets and then Russians were always in love with Ilyushin machines, from legendary Il-2 Shturmovik of Great Patriotic War to venerable Il-62s which flew long-distances, including internationally, including transatlantic and over Pacific, to early versions of Il-96s. News of a freshly signed contract were met with a huge outpouring of public joy both for resumption of production of a beloved, albeit deeply modernized, including new engines, jumbo which will be able to carry 390 passengers and for still seeing, in the age of air breather, so loved and so ensuring quadruple redundancy. 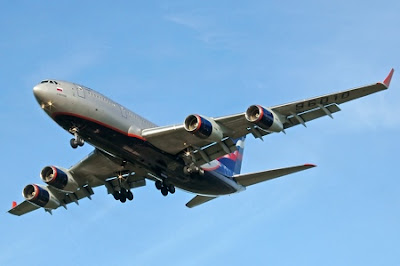 This, and, of course, something that makes those magnificent birds so special with their 4 engines, harking back to the times when the long-range flight was an event. Flying over Atlantic, Pacific or over Norther Siberia, where there are no airfields for thousands of kilometers, or over Northern Pole, on all four makes it so much more comfortable emotionally. In our insane world this is worth a lot, way more than some marginal profitability which goes straight into the pockets of airlines' fat cats and stock buybacks. For the rest, there are two-engine work horses. Until we fly on air-breathers and not on anti-gravity drives or by folding space, seeing those wonderful 4-engine machines makes me feel reasonably safe and happy, isn't it what the travel should be about?
Posted by smoothiex12 at 10:55 AM