Lieutenant X On (The Fate Of) Aircraft Carriers-I

Isn't it a fortunate coincidence, that the moment I returned yesterday to A2/AD business, my "favorite" (wink, wink) magazine publishes today a rather interesting piece by an anonymous US naval officer with the handle of LT X. It is about US Navy's aircraft carriers or, as I would put it in my own terms, a doctrinal and operational dead-end. It is a very good piece in a sense that it states what has to be stated--and it is well reflected upon in George Baer's outstanding treatise "100 Years Of Sea Power"--US carriers were made into strike platforms, that is into "power projection" tools (and secondary nuclear strike platforms) immediately after WW II to offset USAF. But that is not what carriers were realistically meant to do. This is what I wrote in my piece in USNI Proceedings three years ago: 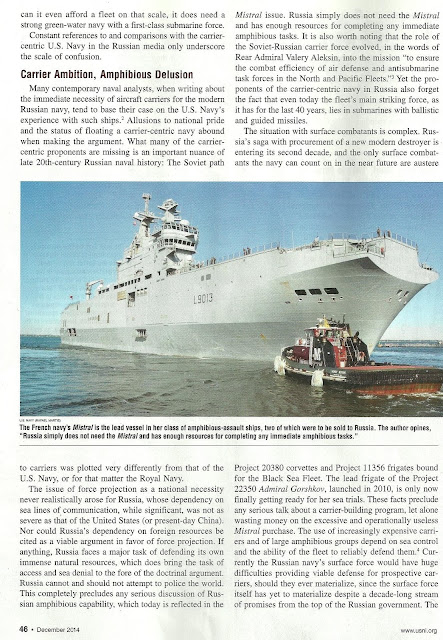 For many Soviet/Russian naval professional(s) who grew up within ever evolving missile paradigm it was always a stretch to view carriers as merely a power projection tool--the issue of a combat stability (boevaya ustoichivost') of a CBG would inevitably arise and a carrier would be viewed as a universal fleet defender--a core of Air Defense and ASW in the fleet-against-fleet, aka Sea Control, battle. A "power projection" was merely an afterthought. But this is not what modern US Navy's carrier force is anymore--it is a power projection tool where its carrier(s) becomes the most weak link operationally when one considers that at this stage US Navy doesn't even have a modern anti-shipping missile and that modern ASW is a horrendously difficult task when one considers that modern Russian and, possibly some time in the future, Chinese subs will be able to strike from the distances of many hundreds of kilometers with the weapons which make CBG's air defense a terribly difficult task. Once Zircon comes on-line, the surface warfare and ASW paradigm will change dramatically. And so must the operational (and technological) concept of aircraft carriers. They must (and they will) work FOR the fleet, not the other way around--if not, modern CVNs will go, if not already, the way of dinosaurs and battleships.

In general, the LT X's article is a very interesting piece, despite some mistakes he makes in re: Russian Navy but I will address those later. They will be especially fun to address with the facts of semi-successful deployment of Admiral Kuznetsov to Syria where EAW (Equivalent Air Wing) algebra, and calculus, spoke volumes.