The moment I wrote two days ago this:

What most of German politcos fail to understand, of course, is the fact that Russia is not beholden to Germany or Europe.

Bang! Germany yesterday made her choice.

Officials in Moscow have issued a sternly-worded ultimatum to YouTube’s parent company, Google, saying the video streaming site could face restrictions after it took down two channels run by RT’s German-language service. In the statement, released on Wednesday morning, the country’s national media regulator, Roskomnadzor, said that it “demands all restrictions be lifted from the YouTube channels RT DE and Der Fehlende Part (DFP), run by the news outlet RT, as soon as possible.”According to the authorities, failure to do so would be a violation of Russian law and, “for such actions, an internet resource can be designated as breaching fundamental human rights and freedoms,” and can face a formal warning.“In the event that the owner of the platform doesn’t comply with the warning, legislation allows us to take measures including completely or partially blocking access to it,” Roskomnadzor added.

I don't know if Germany was forced to do this or not for sure, but I do lean toward the theory that the new incoming powers that be in Germany did it on their own accord, plus do not forget that any European "left" today is anti-Russian by definition for a number of ideological reasons, and when ideology, Atlanticist and globalist one in this case,  is involved one cannot expect rational behavior from those who follow it. As I already stated many times the paths of Russia and combined West are diverging and this process is going to accelerate. In some sense I am glad that Germany's political class and Germany's mostly Goebbelsonean-style media  finally "came out" and that makes many things clearer.
Rostislav Ischenko today came out with a "let me make historic parallels" article, which I have a number of legitimate professional questions to, but describing this Germany's snafu with RT and trying to predict the possible outcome, which will be a further deterioration of relations, which are now going into the open confrontation, he concludes:

Translation: Russia, of course, will also lose in the event of an aggravation, and a lot. But this will be merely a waste of money and time - development will slow down. The sandwich will have to be eaten not with black, but with red caviar. The West, on the other hand, has a good chance to understand what the phrase "dashing nineties" means. As practice and experience show, hybrid warfare is even less humane than conventional war. It seems that there are no front lines, and the Sonderkommando do not commit atrocities: tanks do not roar, carpet bombings are not carried out, no one is led to Babi Yar, and in vast territories tens of millions of people disappear somewhere along with the economy and even with civilization.

I do not believe that Berlin has people who can fully grasp what they did, but when Russia's Foreign Ministry uses the language such as this in its official statement:

Translation:  The date of the plan's implementation (One doesn't want to think that we are talking about Infobarbarossa), apparently, was chosen with special cynicism, given that September 28 is the International Day of Universal Access to Information.

That is ominous. Read the whole statement (use translator)--I haven't read from ever reserved Russian FM such a tone. A year ago, Lavrov already articulated to EU and Germany her real interests when basically told Germany to make her choices.  Recall that:

Those people in the West who are responsible for foreign policy and do not understand the necessity of mutually respectable conversation--well, we must simply stop for a while to communicate with them. Especially since Ursula von der Leyen states that geopolitical partnership with current Russia's leadership is impossible. If this is the way they want it, so be it.

And that is the way it will be now. And even a rare lucid moment of departing Frau Kanzlerin when it may have gotten to her what I was writing about from the inception of this blog, among relatively recent:

I mean Frau Kanzlerin begins to suspect that it is not about Russia or "democracy", it is about devouring Western Europe and putting Germany at the altar of America's desperation to preserve an illusion of own hegemony, for just a little bit longer, as a first sacrificial victim. The rest of Europe will follow. Today she figured it out, sort of...

This is exactly what is transpiring now and Germany made her choice. Of course, Berlin now denies its role in shutting down RT, but knowing who German "elites" are--I would rather negotiate with Taliban and believe them, than any politican from the West. My impression is that the first thing to go will be Deutsche Welle which carries on a proud tradition of Doctor Goebbels and I think that is who should go first. It is a disgusting outlet of the most primitive Russophobic propaganda and, again, let's not go where Ischenko tries to go in his article. Who cares what the Germany's objective interests were when she made decisions time after time against them for whatever reasons: be that Hitler, be that Wilhelm, or Merkel. What matters is that those decisions were made and, as Ischenko himself admits, Russia can live without Germany, the opposite is not true, however, and it is Germany's choice.  It is 2021, not 1914 or 1941. As I write for years, Russia will settle Germans who will be moving to Russia. In the end, Ischenko's article is titled Germany's Third Fateful Mistake. There are NO new Bismarks in Germany.

But as I repeat all the time: Russia is not a charity and she is not going to become any time soon, especially for those who obviously continue to think that they are indispensable for Russia. This might have been the case 20 years ago but it is 2021, not 2001 today. Siemens learned this reality the hard way. At this stage, Russia has many big fishes to fry and they are not in Europe. They certainly look genuinely joyful today. 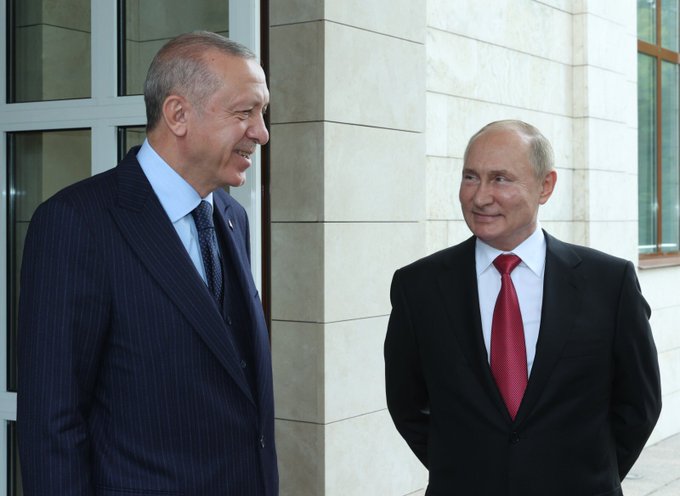 What is the meaning behind this "fruitful meeting" we will learn later indirectly, but Turkey does move closer to Russia even without the usual media spin. Erdogan is a shrewd politician and knows where the future is.
Posted by smoothiex12 at 4:02 PM