Is Hungary An Example...

...of what pragmatic non-ideological approach to foreign policy should be?  In many respects it is. Victor Orban is a man who cares about his nation's prosperity and stability. Among major prerequisites for that is a foreign policy, which in case of a relatively small nation such as Hungary, serves interests of Hungarian people and business, not some ideological purposes. Apart from Hungary having a contract with Russia's giant Rosatom for new reactors for Hungary's only Paks nuclear power station, Hungary did this now:

Budapest signed a new long-term contract on Monday with Russia’s energy giant Gazprom for gas supplies bypassing Ukraine, Reuters reports. The agreement was sealed by Gazprom CEO Aleksey Miller and Hungarian energy group MVM executives at the Hungarian Foreign Ministry.The deal was signed after Hungarian Foreign Minister Peter Szijjarto announced last month that Budapest had agreed with Moscow on all the conditions for a new supply contract to take effect from October 1. The minister said that under the new deal, Hungary will buy gas “at a much better price than under the expiring contract,” which was signed in 2020.

You see how simple it is? Be nice to Russia and Russia will pay back in kind, a really win-win situation. Obviously Ukraine went bananas immediately and manifested 404's main trait which is envy, which automatically transforms in hatred for Russia. Ukraine immediately ran to...of course, European Commission and promised to halt all gas transit to Hungary through Ukraine. You see, these miserable people cannot reconcile themselves to the fact that not only they managed in 30 years of Project 404 turn their country into the utter shithole and poorest one at that in Europe. No, they still cannot face the reality of Russians agreeing with them that Russians and Ukrainians "are non-brothers". Russians say fine, let's be non-brothers. Since you are not relatives, plus your "leadership" is a collection of Nazi-sympathizers or sanctimonious ass holes who care only about themselves, get in line and face consequences.
Maria Zakharova pointed out in her Telegram-channel that:

Translation: The next time our Western partners celebrate the "days of victims of totalitarianism", nodding towards the post-Soviet space, let them remember that denunciations of neighbors on the occasion of envy are a breeding ground for its (totalitarianism) formation.
You can almost feel desperation of 404 and her curators in Europe (and the US), but the issue is extremely simple: Gazprom fulfills all its contractual obligations to European customers. Anything above it or when politics is involved, which is always, either pay more or go and freeze to death. Russia is not a charity, and as Putin is on record Russo-phobia has a price. Yes, the price is steep. But when politics takes precedent over normal mutually beneficial relations, well, what can I say--let them live with the consequences. New possible German Chancellor Olaf Scholz (from German Social Democratic Party) already started the same tired tune: Russia needs to keep Ukrainian transit and that Germany really "cares" about "energy security" of Eastern Europe (in Russian).
What most of German politcos fail to understand, of course, is the fact that Russia is not beholden to Germany or Europe. Considering economic and political dynamics of EU, Russia is already hard at work with rerouting her energy supplies to the East, where there are very many customers hungry for Russian energy and, most importantly, those customers do not give a shit about LGBTQRC4ISR rights, about the "freedom of speech" and other propaganda BS the combined West uses for its nefarious purposes, and will gladly pay for what will be (and is being) rerouted from Europe. The objective of Russia's energy policy is to remove EU from the position of primary energy customer and supply it on the bases "as needed" or as "what is available". US "ministry of truth" is already hard at work:

Then it goes into the same "Russia is bad" tropes until in the very cellar of the article it gets to a sensible conclusion that:

Another theory, although analysts consider it somewhat less likely, is that because Gazprom believes Nord Stream 2 will soon be fully operational, it may not need to book further capacity elsewhere.

Generally speaking, one cannot communicate with EU and NATO in normal language anymore and the drifting apart will continue. But Hungary is an excellent example of how bilateral relations can work. As you can see the trend in EU-Russian economic relations is very pronounced: 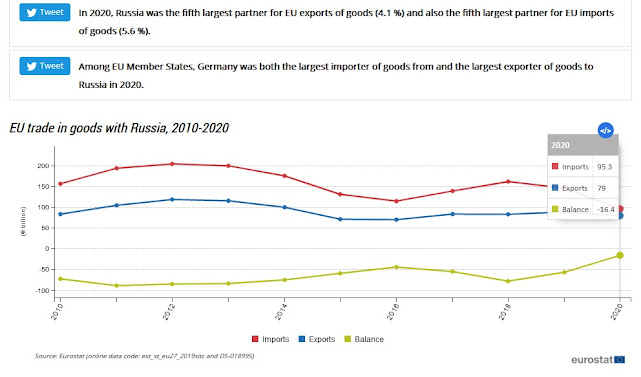 And compared to volume of trade China alone (I underscore it--alone) and despite a dip in exports in 2019 due to pandemic--the trend here is also obvious, the trade grows. 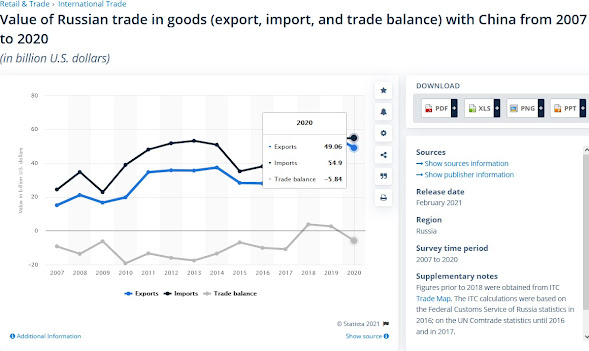 This trade also begins to increasingly substitute the trade with EU. Once one considers Russia's trade with Japan, Republic of Korea, Vietnam and other countries in Asia (such as steadily increasing trade with Indonesia as one example), one can get a clear idea of a steady diminishing in importance of Europe for Russia, not to mention the fact of a dramatic, tectonic shift in Russian attitudes toward the combined West which is viewed (correctly) as hostile, decadent, perverted and unattractive. As I said many times--I never experienced such level of contempt towards the West in Russia, even during the Cold War 1.0 it was different. Never. These attitudes do have a bearing on economy in the long run. But Hungary is definitely not covered by these attitudes because of both personality of Victor Orban and bilateral steady relations. In the end, even such an uncomfortable partner (due to Erdogan's expansionist aspirations) as Turkey sees her trade relations with Russia on the level ANY EU nation, including totally confused Germany, can only dream about.

Turkey pledged its commitment to gradually enhancing commercial relations with one of its top trade partners, Russia, as the two nations look to reach their trade volume target, according to Trade Minister Mehmet Muş. “We want to develop trade with Russia in a balanced way on a win-win basis,” Muş said following his visit to Moscow last week, stressing Turkey's determination to bring the volume of commercial exchange to $100 billion (TL 845.4 billion), a goal set by the leaders of the two states. “We have serious cooperation in the field of energy. We want to expand and shift our cooperation there to different areas of energy,” Muş told Anadolu Agency (AA) Sunday.

$100 billion? Absolutely. As I said, Europe is becoming not that important for Russia and it is all for the better. So, Germany should keep in mind that one day she may wake up and find no good will left in Russia and for that she can blame only herself. Eventually, the transit through 404 will be stopped and this shithole of a nation will exist only on the handouts from those who helped to turn it into what it is today. Germany played and continues to play a huge role in creating this cesspool in the middle of European continent and Russians do keep the score.