Preaching To A Choir?

I, however, wrote two years ago this book in which I explained why I am scared shitless by America's military hubris and incompetence of her political elites, because they may get us all killed because they have no fvcking clue about modern war and how it is fought. So, I had to suffer through simplification of math for people to understand that the math for the US is simply not there anymore and the US cannot win the conventional conflict with such powers as Russia or China and as a result will sustain conventional defeat and will escalate towards nuclear threshold. Remember? 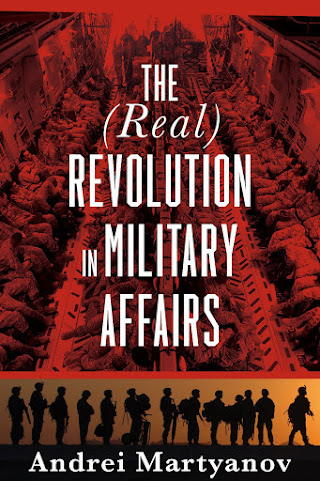 Allow me to quote myself from page 22 of this book of mine:

Such avoidance starts with understanding the nature of military power and of its application. This becomes absolutely crucial in such cases as the demolition of Saddam Hussein’s Army by a coalition led by the U.S. Armed Forces in 1991. If whatever lessons of the Battle of Lepanto in the tactical and operational senses are inapplicable for the Battle of Midway or the Falkland War due to a massive technological gap, the same could be stated about the “lessons” of the First Gulf War which, generally, devolved into a turkey shoot of the vast undertrained Iraqi Army, which enjoyed no operational Air Force nor even a remotely capable Air Defense to speak of. In fact, any lessons from that war could and, in fact, did provide a baneful influence on the state of mind of many Western civilian and military leaders. Hubris and gross misinterpretation of the results occurred despite many professionals describing in depth the Iraqi Army’s dramatic lack of capability, ranging from low quality of leaders and personnel, over-centralization of command, lack of ability for strategic assessment, lack of modern battle management means, not to mention gross technological inferiority.

Any of you who read this book should remember this. You see, I used the word "hubris" eight times throughout the book, on other occasions in the same book I wanted to use words such as "utter bullshit", "pulling fingers" and "dumbfuckery" but was forced to use more civilized and appropriate terms such as  "propaganda" (22 times), operational art (4 times) and operations (47 times) plus this horrible unholy profanity known as "Strategy". I used this whole book, and parts of previous one, and parts of  the new one to explain that one doesn't go into Russia's sphere of interests, create mess the scale of a Ukrainian one and expects that it will not get punished by Russia which has an overwhelming escalation dominance in Europe.

As the latest events in Ukraine have shown the main danger for the United States could be America's desperate desire to get what it wanted since 2014. Namely seeing Russia getting involved in Ukraine openly big time. Always think twice what you wish for, especially for operatives in US State Department and organizations such as CIA, who only know how to handle a small fish and even that they cannot do right, those wishes may come true. As Russia has demonstrated it in April this year, if the US really wants Russia to get "involved" in Ukraine, she can have equivalent of two combined arms armies, two fleets and couple of VKS "fleets" ready to take on Ukraine within couple of weeks. While annihilating Ukrainian Armed Forces, together with neo-Nazi Kiev regime, Russia would do the unthinkable--she would parade both the United States and NATO as militarily impotent paper-tigers because they would be able to do exactly nothing to "help" Ukraine because everyone wants to live. This is precisely the reason Anthony Blinken visited Kiev this week and told Kiev behind the scene to "dial it down", amidst the fluffy tropes about US concern for Ukraine's "soverinity" and "security". As I say all the time since 2014 in this blog, math is not there for the US and NATO. It wasn't there in 2014, now it is not even close.

An American war hero teamed up with a former NATO commander to write a novel about the final days of US global hegemony. The result is a plea for a common-sense policy that seeks to avoid an end game as tragic as it is inevitable.This is a review of a novel. I feel that I need to make this point up front, lest people read too much into what I have to say about it. It is a work of fiction – and an admirable one at that, extremely readable and possessing a narrative that grips you from the start and holds you until the end. It is also highly believable, even when one factors in the need for elements of fantasy in order to keep the plot streamlined and the length reasonable. Reality can be complicated and messy. ‘2034’ is a novel. It is not real.

Scott writes about this book. It came out in March this year.

As I said, I cannot stand military fiction, but according to Ritter this book does indeed contain some ideas which are extremely important.

‘2034’, by Elliot Ackerman and Admiral James Stavridis, takes us to a world that is but 13 years removed from ours. It is one where the United States no longer possesses military supremacy but continues to act like it does. Where China’s economic and technological strengths have been used to craft a military capable of strategic power projection. Where Iran has emerged as a major regional power, and India is positioning itself for a global leadership role. None of the underpinning conditions that make ‘2034’ work as a novel exist today. But when examined in terms of historical continuity, using 2008 as a starting point, continuing through today, and then projecting into the future, every scenario painted in ‘2034’ is not only plausible, but probable. ‘2034’ depicts a world gripped by a multi-polar reality, where an America still operating on unipolar assumptions struggles to find its feet. Two terms appear often in the novel: ‘hubris’ and ‘overreach’. Everything that happens in ‘2034’ is borne of those twin concepts, where a former unilateral superpower finds itself challenged by regional powers no longer willing to accept American hegemony, and the overreaction to this challenge results in global catastrophe.

As you all may know, and I am on record for years, the United States is (always was) nuclear-biased country. It is the only country which used nuclear weapons, and it is the only country which came close to serious consideration of a use of such weapons in conventional conflict. Recall that Truman authorized moving nuclear weapons (without triggers, though) to Guam in 1950. "Just in case". So, it is totally conceivable for the US to go nuclear in case of sustaining serious losses in a conventional conflict even in a war with a nominally inferior conventional power.  With global power? Russia doesn't need to "project" her power against US, she can defeat any conventional force in Eastern Europe purely conventionally and, God forbids, destroy human civilization with her nuclear arsenal. Ritter notes this:

Well, today the "ability to project military power globally" against the background of the ongoing real revolution in military affairs means merely exposing your forces even in staging areas and rear to serious attrition. Here is how Iran did this.

As you may expect, even a single tactical nuke in the vicinity of a 0.5-2.0 kilotons yield would have rendered such bases completely inoperable. I know Vicki Nuland doesn't know this but Stavridis does. The United States hasn't been in a classic concentration of force paradigm in decades, and every single US military base today is a fat and easily acquired target. That is why he and his co-author wrote this book. Things changed. Stone-rearranging business advanced tremendously in the last decade, with it came a threat of a huge conventional miscalculation on the American part. And the only thing I disagree with Scott Ritter is the fact that America's unipolar world end is not in the nearest future, but it became a fait accompli  in 2014, and since then we only observe the bubbles and whirlpools a huge sinking ship leaves on the surface after she is completely consumed by the water. Remember? Math is not there, neither is technology on the American side and it is NOW not in 2034. If, as Ritter states,  Stavridis and Ackerman wrote this book as a warning, then it makes it an important book and we can only applaud approvingly the effort by these two authors.

Thirteen years goes by in a blink of an eye. ‘2034’, the novel, explores a plausible outcome should the United States continue to incorporate hubris and overreach as the driving force behind its relationship with the world. It is not an outcome any American should endorse, but it is an outcome that is inevitable should America’s relationship with the world not change.

If that is the point of the book, it is all for the better. I still will not read it, but I am grateful that Scott Ritter did it (three times) and the fact that this book is based around the same set of strategic ideas I write about for many years, makes me feel not so much vindicated as hopeful that people of such a rank try to be realistic and militarily reasonable and only add to the choir of voices which calls on the US to face a reality and adjust its behavior accordingly. In fact, it may even work for the US benefit. Obviously, the US State Department and US utterly incompetent think-tankdom never read Bismark about the art of possible and have no concept that real international relations are not always a zero-sum game. But who knows, maybe a sheer volume of voices will get through, especially when S-500, A-235 and 3M22 become fully operational, like this year.