It is with the mixed feelings that I write this post, because I know how adults and, in the United States, baby-boomers, failed them--in some sense they are victims. On the other hand what did one expect? I am talking about millennials. I was going to write about this for some time, because I think it is a huge problem, especially when I saw this some time ago.

Make no mistake, I probably will have same reactions as this dude when teaser trailer to Denis Villeneuve's Dune will come out next year, but you know my background, not that I am any standard next to which public discourse should be judged or serve as an embodiment of an adulthood--I am definitely not. But this dude is dedicated, he has his life at the altar of the nauseatingly long and increasingly talent-less liberal "woke" public announcement also known as Star Wars money squeezing machine, which long ago lost it, if it ever had anything to really lose, any charm and dreaminess it enjoyed through Episodes 4 through 6. I feel for this guy and the problem is not him personally, the problem is that he is not alone. Robert Bridge writes in his painfully succinct piece:

Increasingly open to astrology, magic and sorcery while happy to virtue signal on behalf of any PC-saturated issue, the entire millenial generation seems wholly unequipped to face the daunting challenges of adulthood.They may not know how to change a flat tire, cook a simple meal or stop living in their parents' basement, but Millennials – the tech-savvy demographic typically born between the years 1981 to the early 2000s – seem increasingly preoccupied with subjects of a less practical nature ever since graduating from college. Whether it is symptomatic of Trump Derangement Syndrome, some kind of New Age mysticism or perhaps spending four long years studying impractical liberal arts courses, it’s hard to say. But many people are looking to empower themselves with alternative techniques once ridiculed as sheer quackery.

I know what Bridge is talking about. First hand. No, not my children, they were brought up differently, being subjected from the earliest age to the idea of a respect to the labor--a real one. And if my daughter's path through economics' degree was somewhat expected in an uber liberal and woke Seattle (and then Milan), my son, certainly went, with approval from both mom and dad through this. Almost literally. 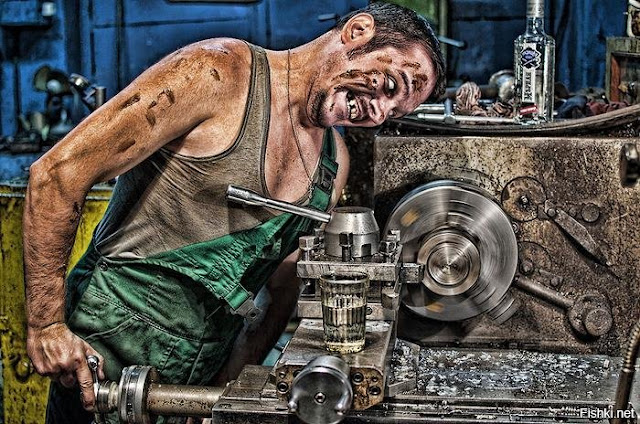 And this is the key. Millennials are the product of the both America's catastrophic de-industrialization and ideology of being hip being shoved down their throats behind which is not just the fad of suicidal wokeness, a consequence of a degenerating education in fields which are useless, but of the complete removal of a productive labor as an honorable undertaking to be aspired to from whole generation's idea of a JOB and substituting it with the idea of being a office plankton at best, being unemployed, at worst as the normal state of the affairs and, in fact, things to be desired.
That is why we have today almost a whole generation of 30-35 years old boys and girls, who see their realization in life in trying to make careers in cosplay, writing poetry, creating shitty music, being political activists promoting bizarre and ignorant causes, and, in the end, going full occult, while not being able to solve basic everyday tasks which grown up normal men and women solve without any problem.

This speaks volumes about the mindset of the Millennial generation, which has been raised on an unhealthy diet of liberal radicalism and political correctness gone stark-raving mad. Because a president was elected that they didn't like, they now believe that the summoning of mystical forces will change things. This is an act of desperation, and attests to the type of education many of these young adults are receiving at some detached, tree-lined college where ‘queer and gender studies,’ for example, oftentimes substitutes for the time-honored classics of Western philosophy and history. Meanwhile, the study of science only seems to have merit when it confirms their exceedingly warped worldview. For example, that there are some 13 gender types to choose from, or that the planet and all of its life forms are about to succumb to man-made climate change.

You all know this, you did experience this, most likely, yourself. Yet, here is even more damning, for the United States, thing:

Only 39 percent of the current workforce is under the age of 45. And while jobs in the aerospace and defense sectors are seen positively by the majority of young professionals, only 1.5 percent of 25- to 34-year-olds in the U.S. have a science degree. Taken together, the challenge is obvious to the authors of the report: Aerospace and defense companies are “faced with a shortage of qualified workers to meet current demands as well as needing to integrate a younger workforce with the ‘right skills, aptitude, experience, and interest to step into the jobs vacated by senior-level engineers and skilled technicians’ as they exit the workforce.”

Well, duh! What did they expect in the country where occupations of stock broker, entertainment star or useless celebrity for decades are considered as most desirable and involve no actual labor to get to at least some material and moral satisfaction benefits those positions allegedly provide. In the nation where the opinion of some dumbfuck from Hollywood who is payed huge sums of money to pretend to be other people is valued more than opinion of people with skills, knowledge and authority, it is no surprise that what would have been considered even 30 years ago as the state of being a loser is, today, extolled as a life's success today. This is not an environment which generates aspirations to get one's ass into some advanced manufacturing program to get a AAS in CNC Operations or become jet-engine mechanic, not to mention get at least a start with degree in fundamental science or engineering. Nah, this is hard and requires an effort. You know, mobilization of moral and physical forces inside oneself to achieve a tangible goal and become a productive member of the society, sometimes well-paid. That requires work, a hard work which makes one a real person. And Bridge is correct:

Perhaps the best takeaway for the more liberal-minded Millennials is to remember that what you learn in a classroom and what you experience in the real world are two completely different things. The higher institutes of learning would do well to remind their students of that difference, while allowing for a climate of frank and open discussion on all subjects. Even if the subjects bring discomfort, which is the way the real world works. No amount of magical spells or charms will change that.

The world outside doesn't need "philosophers" and political "activists", it needs people with knowledge and skills, people who can make a decision on their own and who can take responsibility for their actions, it needs people who can work hard, especially in a productive field and who, at some point of time, when shit hits the fan, and it will, can behave themselves as what modern generation failed largely to deliver--adults.
Posted by smoothiex12 at 8:03 PM