N-th Battle of the Atlantic.

I hate historical parallels, I especially hate them in military history and operational art. Yes, I know--we should learn from history and I totally support that and do it myself. But for goodness sake, what is the operational and tactical value of the Battle of Lepanto for modern naval combat? What is the value of lessons of Peloponnesian War for modern world? US as Athens? Or as Sparta? Really? A collection of contrived "analogies" (same as the US being a Rome) good only for consumption of uneducated pundits. Thucydides Gap? Isn't it all what is in the foundation of a disastrous US military and foreign policies written by none other than all kinds of neocon "scholars" trying to find historical symmetries where there is none?  And so it continues:

My quarrel with otherwise grimly (almost) realistic piece on US Sea-lift, symptomatically titled You Are On Your Own, is not even in the absurdity of NATO "fighting" Russia in Europe even under the assumption of fully secured Atlantic SLOCs--US military professionals (not some political D.C. generals) they know the conventional warfare score in Russia's vicinity and no amount of boasting and bluster can hide a simple fact that any configuration of NATO forces around Russia will be decimated conventionally. This is  not to mention the obvious fact that Russia has no intentions whatsoever to attack Europe, so the scenario can only be discussed within the framework of NATO attacking Russia. My quarrel is with this:

The lessons from World War II are on the minds of many in the U.S. military’s high command when it comes to logistics.

And what those lessons might be, may I ask? What, building Mulberry? I don't know what those people think but even the strictest of EMCON is not going to make much difference in case of NATO's (well, mostly Anglo-American) war against Russia, since no one as of yet knows how to deal with Liana, specifically designed for targeting and what to do with the ranges of modern anti-shipping missiles which are now in many hundreds and even thousands of kilometers. So, I may ask, and how does this relate to tactical and operation reality of the naval combat of the 21st century?

In an Oct. 5 presentation at the Atlantic Council, Foggo pulled up an image of the immense landing and sustainment force on the beaches of northern France in 1945 to demonstrate what was made possible by containing German submarine activity in the Atlantic.

“Operation Overlord. Look at all that stuff,” he said, pointing at the picture. "That would not have happened if we had not won the Second Battle of the Atlantic. That battle raged during the first few years of the war and the Germans almost brought us to our knees using the Wolf Pack tactics.”

Now they propose the Fourth Battle of Atlantic. Well, will Russia try to interdict Atlantic SLOCs in case of aggression against herself? You can bet your ass she will, but that will have very little to do with "Wolf Packs" and their "tactics". In fact, submarines will play only limited role in that. Today, any target, especially large merchant ships, is detectable and targeting information is provided in real time to weapon systems instantly. Not even strictest EMCON will prevent passive over-the-horizon means detecting and developing targeting for the opposing (well, Russian) forces. And then, of course, apart from modern C4ISR complex come all those funny high-supersonic or hyper-sonic missiles. That is where all those WW II "lessons" become absolutely irrelevant since ranges and velocities of modern cruise missiles is an entirely different combat paradigm which makes operational experiences of the past simply obsolete and inapplicable.

Indeed, it is possible to play with simplest Salvo Equations numbers when one begins to consider that most anti-shipping cruise and aero-ballistic missiles are launched beyond the ranges of carrier aviation, granted that carriers and their battle groups survive. In the end, it all comes down to how many bombers (and fighter bombers, such as SU-34) and their fighter escorts will Russia be able to provide. Something tells me that the number will be substantial, especially with mobile S-400s being redeployed closer to Russia's borders thus providing additional security for air-deployment from airbases in Russia. I guess simple middle-school compass and decent map will do in giving an idea that approaching Western Europe for any vessel will be an ordeal with very high probability of a tragic outcome. Any "flank" port facilities in Mediterranean and Baltic Sea become a complete exclusion zones, thus leaving only West-most extremities of French and Dutch port facilities tentatively (well, mostly theoretically) available for any kind of supply of this hypothetical US force which will be deployed in Europe to fight those aggressive Russkies. So, in this case, the title of the article is correct. One is also forced to appreciate Russian base at Khmeimim and the role it may (will) play in shutting down approaches to France and Portugal. Just as a reminder, the distance between Akrotiri AB and...well, let's put it this way--it is not going to last long. The question in this case which matters most is--because conventional campaign in Europe against Russia is unwinnable, when will the US in this scenario decide to use nuclear weapons as the last resort? We may only guess... 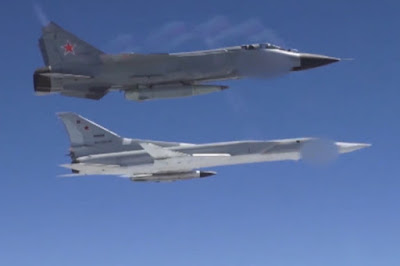